Following on from our last blog post about pack saddle pads that are constructed from marram grass, we also have in the collection a number of objects made from other types of straw.  Basketry, grass and straw-work are grouped together in the same category as the construction techniques are similar – it’s a matter of weaving or tying strands of natural material together to create a form.

Some of our most interesting straw-work objects are traditional bee hives, known as bee skeps. The word skep is thought to have come from an Icelandic Norse word, skeppa, meaning a straw basket and grain measure: their original purpose being a half-bushel grain measure, although Saxon beekeepers are thought to have been hiving bees in them since early Christian times. (Skep History (Beespoke.info)(2014) http://beespoke.info/2013/10/22/skep-history/ Accessed: 14.09.2017)

A skep is basically a straw coiled basket, turned upside down to create a cosy home for bees, with a small aperture located in the side for them to fly in and out. 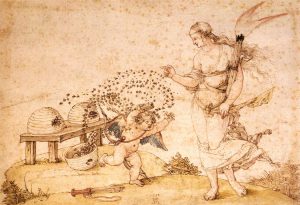 Skeps have been used for centuries. Here they feature in Albrecht Dürer’s Cupid the Honey Thief – Pen and ink and watercolour on paper, 1514. Image credit: Web Gallery of Art 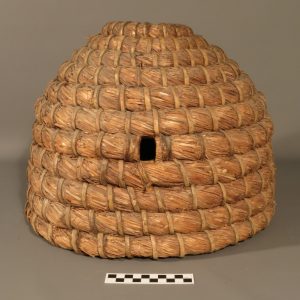 Bee skep KIGHF.QP.0029, collected in the early to mid-1900s by Isabel F. Grant from the Badenoch area of the Highlands

The traditional coiled skep was in common use until the modern wooden hive superseded it from the 1850s onwards.  The now familiar wooden box-like structure, designed by Rev. L. L. Langstroth in 1852, has removable frames which allow for the easy harvesting of honey and checking for pests and diseases.  With the straw skeps, bees construct honeycomb inside the cavity, and when full, the beekeeper would use various methods of extraction to remove the bees and harvest the honey. 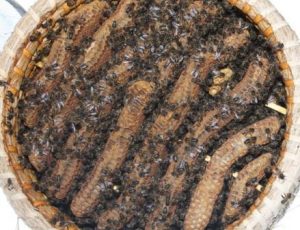 A skep full of honeycomb and bees. Image courtesy of Jane Sellers, Beespoke.info

Some forms of extraction, such as sulphur suffocation, are as destructive as they sound and result in the extermination of the bees, although there are non-destructive methods which don’t harm the bees such as turning the skep upside down and drumming on the sides to drive them out.  Nowadays, in certain parts of the USA, it is illegal to keep bees in skeps due to the difficultly in checking the hive and controlling mites and diseases. However, skeps are still frequently used by the modern bee keeper in gathering up and transporting errant swarms of bees.  It’s good to know that these attractive looking and finely crafted objects do still have a place in beekeeping.

Most of the bee skeps in our collection have beeswax and propolis residue on the inside walls of the skep, so they have certainly been used in the past for housing bees. Some also have wooden sticks running across the internal cavities, which the bees could use as a basic structure for starting to build their honeycomb. 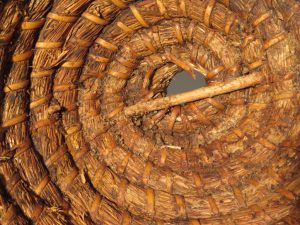 Interior of KIGHF.QP.0029, showing residue of beeswax and propolis, a dark brown resinous material produced by honey bees, used as a sealant within the hive

Here at the Highland Folk Museum, we’re lucky enough to have a basket maker on hand.  Elaine Bruce, one of the interpreters up at the 1700s township, is also a basket maker.  On one of the Heritage in Action days which ran throughout the summer holidays, Elaine demonstrated how to make coiled straw baskets, and visitors could try their hand at this skill.  This simple (once you get the hang of it) technique is the same method of construction used for the bee skeps, so Rachael and I went along to have a go, in order to better understand the skeps and straw coiled baskets in our collection. 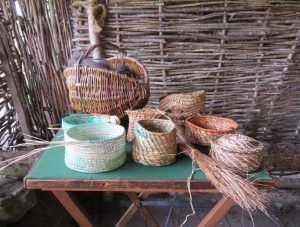 Traditionally, oat straw would have been used for coiled straw-work baskets and skeps, but any dried grass will work. In advance of the straw coiling workshop, Elaine had picked some long grass that was growing up at the township and let it dry out until it was a golden colour.

An important tool used in coil work is a short piece of tubing, through which the straw is fed to create a regular sized diameter of coil.  This is often a length of copper pipe, but traditionally it was a piece of cow horn.  Why now brown cow? Because it’s the perfect funnel and coil measurer. Feeding the straw into the horn ensures that the straw coils are all the same thickness. 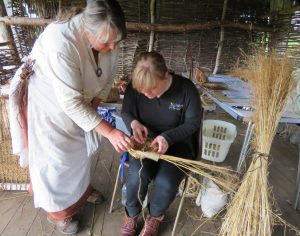 The other materials and tools needed are an awl, or thick needle, traditionally made from bone, plus the binding material to hold the coils together.  We used twine, but traditionally this was often strips of bramble.  Collecting, de-thorning and splitting the brambles would be a very time consuming job.  The skeps in our collection are bound with a variety of materials, including sisal twine and unidentified plant based strips – possibly bramble but it’s very hard to tell.

The basket we worked on had already been started off by Elaine but we continued with coiling the basket, feeding the straw into the horn, adding more when it started to thin out. The needle is inserted from inside the basket, underneath the coil below, through to the outside.  The twine is passed over the top of the coil and threaded through the needle, then pulled back through the straw.   Pulling the binding tight and shaping the coil with your thumbs while you work creates the shape of the basket. 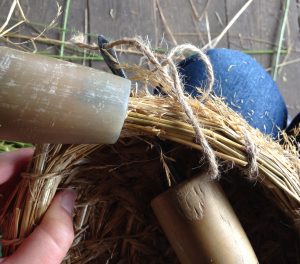 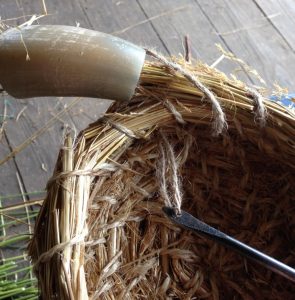 And that’s the basic principle, just keep repeating until you end up with a basket, or a skep! I’ve heard that they were sometimes finished off and tidied up by placing burning newspaper inside to singe off the short fibres of straw, under a watchful eye. It was great to have a go at the technique, to get to grips with how these objects are made, and to understand the time, effort and skill involved in making a well-crafted and good looking straw-work basket or skep. Skep KIGHF.QP.0030 and cap KIGHF.QP.0031 – the “cap” sitting on top of the skep allows room for extra honeycomb production

Next bog post – A few of our favorite things…