Although we’ve written about some of the baskets that have interested us along the way we haven’t been able to discuss them all, so here’s a behind the scenes peek at a couple of baskets within the store…

Helen – One of my favourite baskets in the collection is KIGHF.QP.0064, a fishing or angling basket.  This kind of basket is still in use today.  There is a slot in the lid for the angler to pop the fish through, once caught. 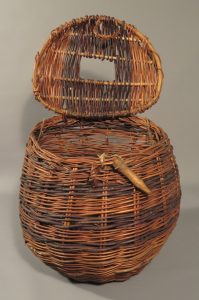 KIGHF.QP.0064, a fishing or angling basket 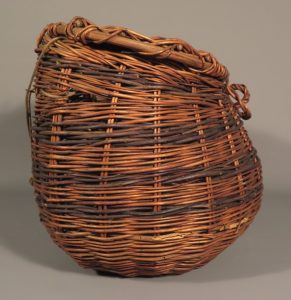 Side view of the basket

I’m no fisherwoman so my appreciation of the purpose of this basket is limited, but what I really love is the aesthetics of it.  From the side, it has such an organic, fluid, gently rounded shape; it is a real thing of beauty.

I also love the colours of the basket.  The basket is banded into strips of dark brown and a rich orangey brown.  This has been achieved by using wicker strands (most likely willow) which have either been stripped of their bark to create the smooth orangey brown wicker, or the bark has been left on, resulting in a much darker, woody appearance.  The overall shape of the basket and the contrast between the two colours is wonderful, and worthy of a closer look. 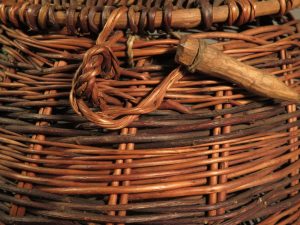 Detail of the stripes of different colours

Although we don’t have a specific date for this basket, we do know that this basket was donated to Dr Isabel F. Grant’s collection sometime between the 1930s and early 1950s, from a woman who lived in Edinburgh.  Grant recorded that it was made by a crofter in Glen Uig, which is on the west coast of the Highlands.  We don’t usually have any information about who made the objects that we’ve been looking at, so it’s great to have even this small amount of information to add to the history of the basket.

Although our current perception of basket-making is that it is a predominantly female activity, baskets were traditionally made by men.   Willow would be grown on the croft and harvested in the autumn, and baskets would be made during the long dark winter months when there was less outdoor work to do.  This angling basket could well have fitted into the typical cycle of croft life. Traditionally, the basket making skill would have been passed down from father to son, or occasionally to daughter. The maker clearly had some talent in basketry and hopefully passed that knowledge down the generations, although sadly we’ll never know if that was the case here.

Rachael – My favourite basket within our collection is KIGHF.QP.0061, a creel. 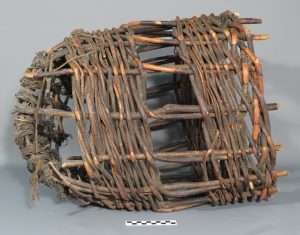 These types of baskets were used to transport peat, potatoes and seaweed and often have an open ‘band’ half way up which allows a strap to be attached for carrying, or for the basket to be hung from a pack saddle. We know that I.F. Grant collected this creel from Skye and that it was on display during the 1930s when the Highland Folk Museum was location in an old church building on Iona. The bottom of this creel must have broken during use as the weavers at the base of the basket have been replaced with a continuous length of heather rope woven in and out of the stakes. Heather was often used to make baskets, mats and rope and was traditionally harvested during September after flowering when it was most flexible. The plant was pulled from bogs or areas around burns where it grows longer unlike in areas where it has been burnt or grazed by livestock resulting in a shorter stem. 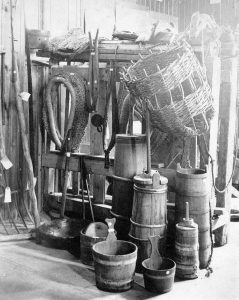 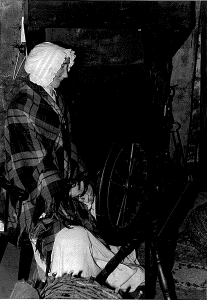 The basket on display when the museum was based in Kingussie, being used to hide a motor. Both images courtesy of the Highland Folk Museum.

When discovered in store during our initial audit of the basketry collection this creel had two metal struts within it which we thought might be to give shape to the sides of the creel. Through discussions with the Folk Museum’s curator, Rachel Chisholm, we discovered that the basket had previously been used to hide the motor for a mechanised spinning wheel when the museum was based in Kingussie, and so the struts could be removed as they were no longer needed to hold the motor in place. Unfortunately the heather rope was in poor condition, being very dusty and misaligned. To prevent the brittle heather from breaking and becoming more tangled upon itself it was gently eased apart and thin strips of Plastazote, an inert foam, were slipped inside to replicate the stakes, holding the heather rope in position. Once more stable the basket was carefully cleaned using a soft brush and low suction vacuum to remove the dust, dirt and woollen strands that had built up during years of storage and display. 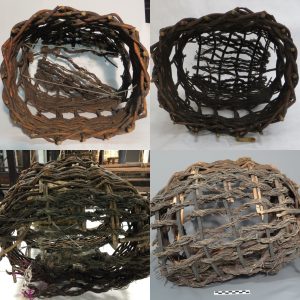 KIGHF.QP.0061 before (left) and after (right) cleaning and conservation work.

Next blog post – In a spin about textile tools