We now do, and I’ll never look at another basket again without appreciating how, and indeed why, it’s been made.  In and of themselves, baskets are beautiful things, often finely crafted by a skilled basket maker.  But what a basket looks like is a result of many factors – its purpose, its locality, the materials it was made from, and the style of construction.

What is it for?

A basket is not just a basket.  It’s usually a basket for a very specific purpose. We have baskets for holding fishing lines, for carrying cut peat, for transporting grouse, for collecting potatoes, for holding wool before it’s spun, for measures of grain, for shaping bread dough as it proves, and baskets for carrying curling stones. We have objects that are made from basketry techniques but that aren’t baskets per se, such as woven rectangular bags for transporting caught salmon, straw coiled skeps for bee keeping, plaited grass horse collars and mats made from twisted heather.  We have mystery baskets which we’re just not sure what they were used for, and we also have baskets that are familiar to us all; laundry baskets, shopping baskets, hampers and bicycle baskets. 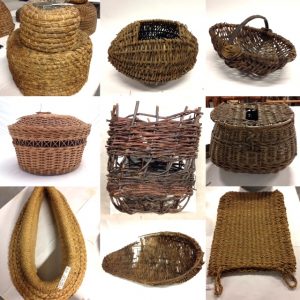 A fantastic resource for researching Scottish vernacular baskets is the Woven Communities website. This Arts and Humanities Research Council (AHRC) funded project, led by basket makers from the Scottish Basketmakers Circle and the University of St Andrews, has pulled together knowledge and expertise about Scottish baskets, including invaluable research about objects from our collections here at the folk museum. Follow this link to find out more about the project.

The Highland Folk Museum holds a collection of baskets that have been gathered from all over the Highlands and Islands.  They weren’t necessarily all made here, but each one tells us something about life here in the Highlands over the past few centuries.  A good example of this is the basket in the photo below, known as a quarter cran. This type of basket was used as an official measure for catches of herring.  We have no record of where this basket was made, but it might have been imported from Great Yarmouth, England, which was a major producer of the crans used in the fishing industry.  So although it probably wasn’t made here, the fact that it was collected in the Highlands illustrates the once booming herring fishing industry here in Scotland, and also the trading links between the Highlands and the rest of the UK. 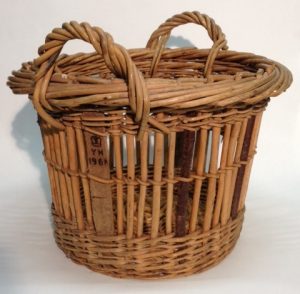 A quarter cran basket (KIGHF.2017.007) was used to measure catches of herring. Baskets that met the official quarter cran dimensions, as set by the government, were stamped with a crown, the initials of the inspector and year of inspection.

Baskets are usually made of the material that was readily available in the locality, such as heather, willow, grass, dock or hazel.  For example, on the Western Isles and along the west coast of Scotland, trees are in short supply and therefore wood as a material is a rarity.  Inhabitants instead used what was plentiful – grass and straw.  This was often marram grass, also known as bent grass – the type of long tough grass that grows in sand dunes.  The grass and the dunes need each other; the grass helps to stabilise the dunes, and then grows happily in the sandy habitat.

Marram grass is a wonderfully versatile and strong material, used for weaving baskets, grain bags, bee skeps, straw horse collars and saddle pads, and for roof thatching.  Its usefulness however was at one time its very downfall, as this following passage reveals ….

“Marram grass has always been exploited by the people who lived near its dunes… All over the country marram grass was once so commonly harvested for thatch that in places the coast disintegrated, villages and farmland were buried under sand, and in 1695 ‘His Majesty does strictly prohibit and discharge the pulling of bent, broom or juniper off the sand hills for hereafter.” 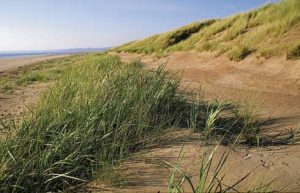 Luckily, marram grass must have recovered after this late 17th century overharvesting, and we have some wonderful examples of grass coiled and woven baskets in the collection. 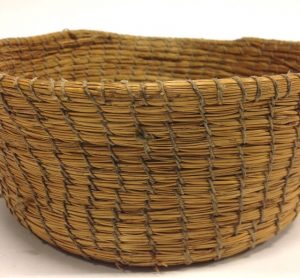 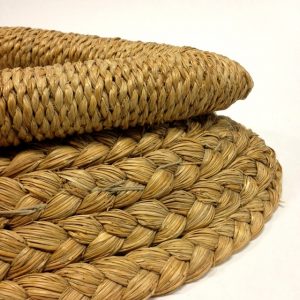 What’s in a name?

Again, a basket is not just a basket. Some of the wonderfully lyrical names for different basket types include creels, mudags, ciosans, crans, skeps, sculls, kishies and swales.   The same type of baskets were called different names by the different communities making and using them across the Highlands, and there is a huge variety of both English and Gaelic terms.  Sometimes this makes it tricky to decide how to refer to a particular basket! We record all the associated names that we come across to make sure this important history is kept with the object information.

Just like the variety of names, there is a huge variety of weaving styles. The most basic and recognisable style is the single “weaver” passing over-and-under alternate upright “stakes” or “ribs”. This style is known as randing.  Slewing is where multiple weavers are woven side by side over-and-under alternate stakes, creating a banded effect around the basket.  In addition to the grass and straw work, as mentioned above, we have other baskets in the collection that are woven with wide flat strips of wood, plus every variation of all these styles and more… 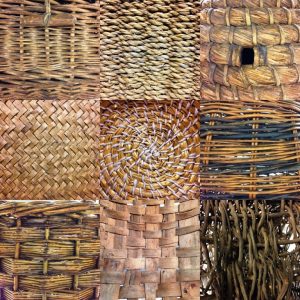 So, combine the different materials used, with the various weaving styles and the overall shape of the basket, which all depends on the ultimate purpose of the basket, and you get an idea of the variety involved in the seemingly innocuous “basket” category.