In our last blog post, Rachael introduced our collection of objects made from cow horn, a material and craft that was connected to the Travelling community.  As mentioned, horn was once a very common material here in the Highlands, used for a multitude of objects such as spoons, beakers, quaichs, powder horns, scoops and ladles.  It has been superseded by plastic and cheap metals though, and the craft of horn-working has fallen into sharp decline as there is just no demand for it.

Luckily for us, Bill Steele, one of the few remaining horn workers in the country, has his workshop just down the road from the Highland Folk Museum.  Rhona Ramsay, who is researching our collection for her PhD on the material culture of Scottish Traveller communities, had been in touch with Bill about hornware, and Rachael and I jumped at the opportunity to meet him, to show him the collection of horn here at the museum and then to visit his workshop and see the spoon making process in action. 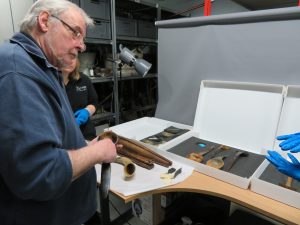 Showing Bill our collection and hearing his thoughts on the objects

Nowadays Bill just makes for pleasure, but in the past he has completed large orders – the largest one being 10,000 turned horn crochet hook handles for the Japanese market. Bill started off making horn/antler fish priests (a club used to kill a caught fish, so called as they delivered the “last rites” to the fish) some decades ago, and his passion for working with horn continued from then onwards.  An old man in Aberdeenshire taught him a certain amount about working with the material, but he is mainly self-taught.

Although not from Traveller heritage himself, Bill has amassed knowledge of Traveller culture through spending decades working with horn.  Bill was extremely generous with his knowledge and time, and we learnt an awful lot from him about the material and the making processes, which we can add to the knowledge of our collection.  It was fascinating to hear a horn-worker’s take on the objects – how they would have been made and things he found interesting (that we hadn’t even realised were of interest until pointed out).

One such object that he was really impressed with is a metal (possibly tin) lined tumbler – he thought this was a very special and unusual piece. The inside seam of metal is sophisticated, and overall the tumbler walls are very thin, which is impressive as that’s two materials layered together. 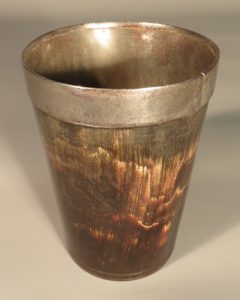 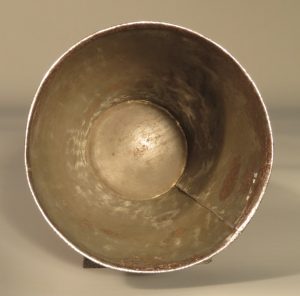 One fact we learnt from him was that traditionally, Travellers would have been given a pair of horns – one of them was to be worked into the objects required and returned to the farmer or owner of the horns, and the second horn was kept by the Traveller, as payment. This could then be worked into items for them to sell and earn their livelihood.

He also told us that cows suffer from bugs burrowing into the base of the horns and irritating them. You might see cows rubbing their heads and horns on posts or trees to try to scratch this itch. The bugs sometimes eat into the horn and leave tunnels – we have a few items in the collection (some spoon handles) with evidence of this pest damage, as below.

The spoons with stamped decoration inside the bowls are quite unusual and Bill hadn’t seen many of these before.  The pattern would have been impressed with a heated stamp, but must have been done when the spoon was flat, before it was formed into a bowl shape, otherwise the stamp wouldn’t have worked due to the curved surface. Obvious when you know it! 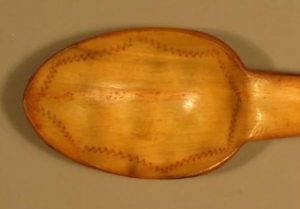 Horn can either be heated with dry heat or wet heat. Wet heat, i.e. boiling it in water, tends to not be very successful and the horn can revert back to its original shape. Think of washing your hair (keratin – the same material has horn) with hot water – it goes back to its natural shape when dry again, as annoying as that may sometimes be. We have one scoop in the collection which he believes was created using wet heat as it has since reverted to a curled shape. Dry heat, i.e. with a flame, changes the shape more permanently.

Bill kindly took us to his workshop and showed us how he makes horn spoons. Before he got started he showed us some different types of horn – he now uses Indian cow horn as Highland cow horns are prohibitively expensive to buy. He showed us a sample of the bone-like core that is inside horns and needs removing before you can work with the material. 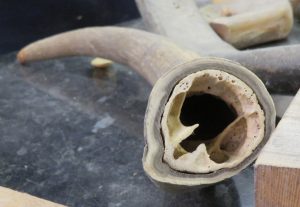 The outer horn, and inner core A cut through of the horn, showing the hollow body and solid tips

This process is roughly the same as how the Travellers would have made them when they were on the move around the Highlands.  The basic shapes were cut out of the prepared horn – Bill uses a band saw, but traditionally a knife or blade would have been used.

The spoon is then heated to make it pliable and able to take the shape of the spoon mould. Bill uses a gas flame and heats the spoon until it is really hot and quite blackened.  It is then quickly placed inside a wooden mould and closed shut in a vice. He leaves the horn in the mould until cool, which doesn’t take long. 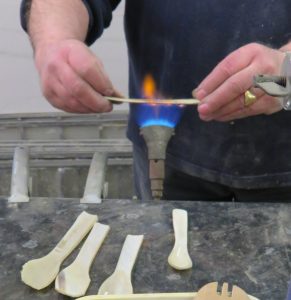 Traditionally, the spoons would have been heated in a peat fire.  Bill has tried this method of heating when doing some demos up at the Folk Museum many years ago.  He found it very difficult to control the heating of the spoons in the peat fire, and ruined many a spoon until he got the hang of it.  The type of wooden spoon mould we have in the collection has pointed ends, which he tells us are for sticking in the ground, to hold fast while the horn cools down. It is likely that the Travellers would have owned more than one mould, so they could make numerous spoons at the same time, in a kind of production line. Again, obvious when you know it! Once out of the mould, the spoon is finished off by trimming the edges down until smooth and neat, and then polishing the surface until all traces of the charred and blackened surface is gone, and the spoons are beautifully smooth.  These processes would have all been done in the past by hand, using a paring knife and perhaps some pumice powder or fine grit, but now the process is sped up by the use of a machine polisher. It still took quite a while for Bill to achieve a fine polish even with a machine, so I can only imagine the effort and time involved in making a spoon without the aid of this. It gives me renewed admiration for the makers of the objects in our collection. 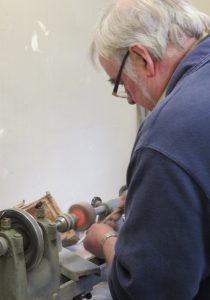 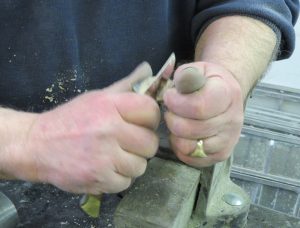 And demonstrating paring down the surface with a knife

It was fascinating to see the spoons after they had been heated and formed, but before polishing, as the surface was surprisingly blackened and rough.  We have spoons in our collection that look like this, so it could be that these are from this same stage of making, rather than being finished spoons that then fell into poor condition over time, as we had originally assumed. Bill emphasised that materials such as horn were valuable, and even failed spoons may be put to another use, rather than destroyed and wasted. An unpolished spoon next to a finished one Three finished spoons, made by Bill, showing a variety of colours that occurs naturally within horn. He kindly gave one spoon each to Rhona, Rachael and I.

When Bill was learning his craft, there was another horn-worker based down the road at Feshiebridge, but nowadays Bill is the only craftsperson working with horn in the area.  In the past, there would have been a horn-worker every 30 miles or so.  Sadly, due to a lack of demand for the products and the expense of the raw material, horn-working is now on the Radcliffe Red List of Endangered Crafts, which is administered through the Heritage Crafts Association (http://heritagecrafts.org.uk/redlist/).  We are really thankful to Bill for sharing his knowledge and experience, that we can then apply to our collection.  Let’s hope there’s a new generation of budding horn-workers out there somewhere…! Bill and Helen (brandishing her freshly made spoon)

Previous blog post – Taking the collection by the horns