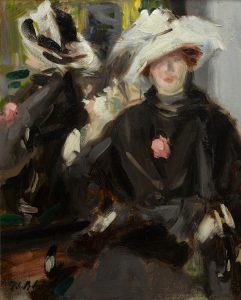 Today, the Scottish Colourists are acknowledged as four of the most talented, experimental and distinctive artists in 20th century British Art.  During their heyday in the 1920s, they were renowned as masters of portraiture, landscape and still life.   However, they did not emerge as a quartet until relatively late in their careers when their Glasgow dealer staged the first group show in Paris in 1924.  The Colourists had a love of France and immersed themselves in the current trends of French art, which became a defining characteristic of their development as artists.  They were some of the first artists in Europe to engage with the creative upheavals that had taken place in France at the turn of the 20th century, which saw the birth of modern art.  Another show followed in London in 1925, turning a loose affiliation of friends bound by common artistic goals into a movement.  Hailed as international radicals, the Colourists did not forget their Scottish roots especially in their brilliance at conveying the unique beauty of Scottish landscape, marking them out as French-inspired artists with a singular Scottish identity.
Image: Francis Campbell Boileau Cadell, The Feathered Hat, c.1914, oil on millboard
#InvMAG #ScottishColourists