The museum owns a very rare group of garden pots by Aldourie Pottery.  They are made in the Arts and Crafts style and were donated in 1908 by the pottery’s founder, Mary Seton Watts.  All of the pots are on public display, for the first time in several decades.  Also on show is an eclectic range of ceramics from the museum’s social history, archaeology and decorative arts collections.

Aldourie Pottery was founded in 1901 by Mary Seton Watts, near the village of Dores on the banks of Loch Ness.  It was a social and economic experiment, based on the success of the pottery she had founded in Compton, Surrey, with her husband, the famous painter George Frederic Watts.  She was concerned about the depopulation of the Highlands and her aim was to create opportunities for skilled employment in a rural area, that would provide decent wages and fulfilling, creative work.  She chose the site at Dores because she had been brought up at Aldourie Castle, in her grandfather’s household.

Sadly the pottery at Aldourie was not commercially viable and production ceased in 1904.  Problems included the additional expense of bringing in clay from Cumnock in Ayrshire, having to send pots away to be fired due to inadequate kiln facilities on site, and limited retail opportunities in the area.  This meant that, although it closely followed the Compton model, the success of Compton could not be replicated.

Ceramics in the museum collections

The Highlands has never been home to ceramics-making on an industrial scale, so Inverness museum does not hold a large ceramics collection.  Dinner plates and teacups from the social history collection show that fashions favoured by local folk were usually made in the Potteries heartland of Staffordshire.  Sherds from the archaeology collection provide glimpses of tableware from earlier times.  During the 1980s and 1990s, the museum was able to purchase some examples of studio ceramics being made in the Highlands at the time.  The art pottery of the studio movement brought the collection back full circle to the handmade ideals, if not the styles, of the Arts and Crafts movement. 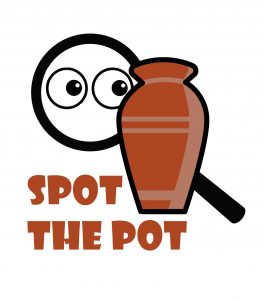 To accompany this display, there is a children’s activity worksheet called “Spot the Pot”.  You can download your activity sheet by clicking here or pick up a copy a reception.  Happy pot spotting!