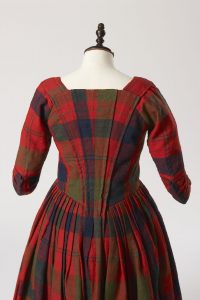 The tartan wedding dress, worn by Isabella MacTavish on her wedding to Malcolm Fraser in 1785, is one of the most popular exhibits at Inverness Museum and Art Gallery.  Last year it was loaned to the Wild and Majestic exhibition at National Museum of Scotland and we are very pleased to now have it back on display.  The dress is very special because it is the only 18th century women’s tartan gown known to exist.  It has been worn by several brides down the generations and is still owned by a direct descendant.

In 2019 a group of researchers, led by Rebecca Olds of Timesmith Dressmaking, recreated every stage of making the gown so that more could be learned about its construction and the role of female dressmakers in the Highlands.  The replica dress can be seen alongside the original for the first time, and for a limited time, here at Inverness Museum.

American Duchess, who were part of the research team, have produced a 25-minute documentary about the Isabella Project which can be viewed here.  For those wishing to “have a go” and make their own version of the dress, click here to download the pattern.  #InvMAG #Isabella  #theisabellaproject Image: Ewen Weatherspoon