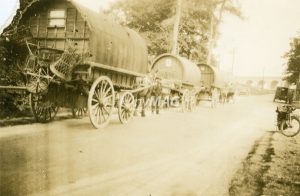 Originally a Galloway man, it was while working in London as an electrical engineer that the amateur photographer, Gordon Shennan, became interested in social welfare.  He did voluntary work at the Cockney Mission in the south of the city.  This interest inspired a “social calling”, which led him to his new post as an inspector for the Royal Scottish Society for the Prevention of Cruelty to Children in the Highland area.  Shennan held this post from 1924 until his retirement in 1965.  Throughout his working life, Gordon Shennan travelled extensively around the Highlands and Islands, initially by motorcycle, and then later by van. 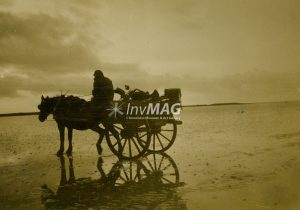 Shennan photographed Highland life as he carried out his duties an inspector for the RSSPCC.  Known as “cruelty men”, inspectors had the power to remove children from their families if there were concerns for welfare and safety.  Gordon Shennan clearly had a passion for recording the unique culture.  His photographs provide a fascinating insight into the Traveller life, but the collection also tells a hidden story of the vulnerability of Travellers and the threat of children being separated from their families.

As a keen photographer, Gordon Shennan captured many of his travels through the lens.  Everything from family groups, to isolated highland snowstorms and floods were recorded by him.  Through his work Gordon Shennan became a genuine friend of many Travelling families, and was welcomed into the sites.  Ever practical, he was not above raiding his own food larder to provide assistance when the need arose. 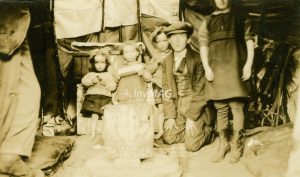 From the images, one can clearly see that the people in these pictures were photographed with a view to recording their way of life, and capturing otherwise forgotten day to day scenes.  As his obituary states, Gordon Shennan had a “perceptive eye with deep feeling for the Highland way of life”.  Through his fascinating and clear images we can look through his lens into the past, and glimpse a unique way of life now long gone.

The Shennan Photographic Collection can be viewed by appointment at Inverness Museum and Art Gallery, contact Andrea Finlayson for details.  Some of the images are available to view online at High Life Highland’s Am Baile website.