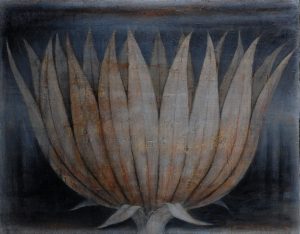 Memorial is an exhibition of interconnected themes expressed in elements of painting, drawing and text.  At the heart of the show are a series of graphite head drawings – and the Memorial Stones project. The drawings have been made over the past 15 years and are from prisoner identity photographs taken by the authorities at Auschwitz concentration camp in Poland, Lubyanka Secret Police headquarters in Moscow and Tuol Sleng prison in Phnom Penh, Cambodia. These prisoners had almost everything taken from them; their homes, their families, their possessions, their names, their hair, their lives. In some cases this thin photograph appears to be all that remains as evidence of a person’s existence.

The Memorial Stones project began with a walk on Cul Beag – a hill Peter’s father had walked in life but never made it to the top of, and where his ashes were scattered. Some years later Peter was on the hill again, picked up a stone, took it home and painted on it. He intends to return the stone back to the summit of Cul Beag in memory of his father. From this action the project has grown – now there are many stones, from many hills, in memory of many people. The stones have originated from Scotland and from Palestine, and will also be returned to the land.  #InvMAG #Memorial