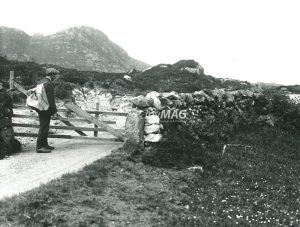 Mary Ethel Muir Donaldson (M.E.M.D.) was born in England in 1876.  As a young woman she sought out quiet and remote places to study natural history and became particularly attracted to the western Highlands and Islands of Scotland.   As an author, M.E.M.D. initially became interested in photography as a means to illustrate her books, although she soon became passionate about the craft.  She studied composition and travelled extensively through the western and northern Highlands, capturing images of historic or archaeological places that even today would be difficult to reach with modern modes of transport.

M.E.M.D. also studied chemistry and optics, allowing her to process her own glass negatives, prints and enlargements.   She settled in Ardnamurchan in 1927, taking up residence in her newly built home, Sanna Bheag, which incorporated a dark-room and workshop.  Here she could develop her own prints, modify and improve her equipment and experiment with processes.  Sadly, the house was destroyed by fire in 1947.

After her death in 1958, Donaldson’s biographer, John Telfer Dunbar, was offered a choice of glass negatives from her collection.  He selected 123 in total, neatly splitting the collection into portraiture and landscape images (John Telfer Dunbar inheriting the portraiture component).  This was later donated to National Museums Scotland. 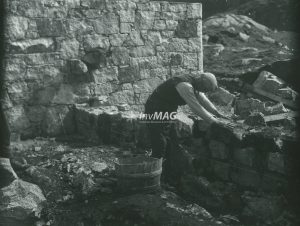 The collection at Inverness Museum and Art Gallery comprises of the remaining 1094 glass negatives, bequeathed to the museum by M.E.M. Donaldson “herself”, and the corresponding contact prints processed in the 1970s.  The photographs date from the early to mid 20th century.  While National Museums Scotland hold the portraiture, the M.E.M. Donaldson collection at Inverness Museum features mostly landscape and topographical images from all over the western and northern Highlands and Islands, making it a fascinating photographic archive of history, heritage and culture.

A biography, Herself: The Life and Photographs of M.E.M. Donaldson by John Telfer Dunbar, was published in 1979.