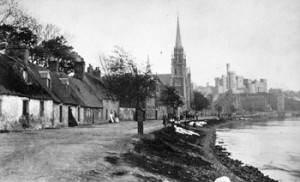 Joseph Cook was a keen amateur photographer and collector of photographs.  He was born in Inverness on 14 October 1880 and after leaving Inverness Royal Academy, he joined the family firm of timber merchants, James Walker & Sons, located on Shore Street.  During World War I, he was a captain in the Queen’s Own Cameron Highlanders.

On the death of his father in 1921, Cook became manager of the sawmill, a post he held for 41 years. He was also a founder member of the Inverness Rotary Club, a manager of the Inverness Trustee Savings Bank and a deacon in the Free Church but he was probably best known for the lectures he gave on the history of Inverness using lantern slides made from his collection of photographs.  He died on 12 April 1973, aged 92 and his collection of lantern slides was gifted to Inverness Museum and Art Gallery.

Most of the Joseph Cook Collection can be viewed on the Am Baile website.