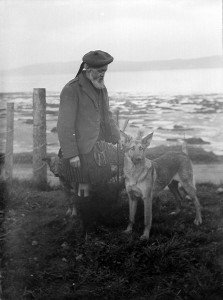 Jimmy Nairn (1900-1982) is perhaps best remembered in Inverness as manager of the Playhouse cinema from 1941 to 1972. He began his working life in 1915 as a part-time projectionist at a cinema in Pollokshields, Glasgow. His first managerial appointment was to the Savoy Cinema, Edinburgh in 1925, followed by the Regal, Stirling in 1934 and the Playhouse, Inverness in 1941 where he remained until his retirement in 1972.

Cinematography was also his hobby and, in 1931, he claimed to be the first amateur filmmaker to produce a ‘talkie’ (a film with spoken dialogue). A decade later he was commissioned to make a film of George VI and the Duchess of York at Balmoral Castle. He also advised Disney on a film about the Loch Ness Monster.

In addition to producing over 40 films on local topics, many of which were used by the Scottish Tourist Board and the Caledonian Society, he had a photography business and took many thousands of photographs in and around the Inverness area, particularly in the 1950s and 1960s. His collection of negatives, glass plates and prints is in the care of the Highland Photographic Archive.