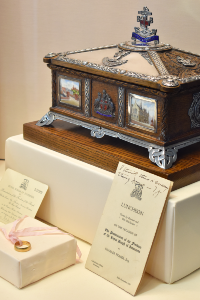 A solemn oath, the signing of a scroll, and a symbolic marriage to the city – these are just some of the elaborate traditions performed by recipients of the Freedom of Inverness.

The Freedom is a rare civic honour with origins in the medieval history of the city. Once a mark of elite social and political status, it is now awarded in recognition of outstanding service to society and to Inverness itself.

The museum’s collection includes several items relating to the Freedom of Inverness. Highlights include a gold ring and ornate Freedom casket presented to local businessman Charles Fraser Esq. in 1938, an 18th century Burgess ticket, and an illuminated scroll commemorating the 2002 Freedom presentation of the late former Provost Allan G. Sellar OBE. A selection of menus, programmes, images, and invitations are also held in the collection.

From June to August 2021, the history of the Freedom of Inverness was explored in a display in the museum’s first floor foyer. This display was supported by Inverness Town House, which loaned a pair of decorative Burgess Scrolls signed by all recipients of the Freedom since 1893.