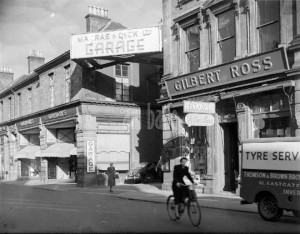 David Whyte (1841-1905), the self-styled ‘Leading Photographer of the North’, came to Inverness from his native Ayr in the 1860s and established a photographic business in the town. His first premises were in Greig Street but he soon outgrew these and moved in quick succession to premises in Huntly Street, then to Union Street. In 1870 he purchased the business of his rivals, Messrs Collier & Park, at 18 Church Street. His final move, sometime in the 1870s, took him a few doors down to 57 Church Street and there the business remained until 1985.

The majority of his photographs were commissioned and include portraits of family groups, weddings and babies. Of particular interest to the social historian are the many photographs of shop windows and frontages.

After his death in 1905 his widow continued to operate the business for several more years. Subsequently, a succession of proprietors took over the business but maintained Whyte’s name. It finally closed in 1985. The last proprietor, Mr F Hardley, deposited the vast collection of around 140,000 negatives and prints to the Highland Regional Council’s Museums Service. They are now in the care of the Highland Photographic Archive.