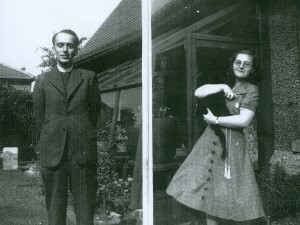 This wee epistle, written on Christmas Eve 1940 is one of a partially complete series of 41 letters written by Reverend Kenneth William Brown (1909 – 1974) to his sweetheart and later his wife Rosemary Elizabeth Buchan from 1939 – 1941.

At the time the Reverend Brown was Curate at St Andrew’s Cathedral, Inverness, whilst his beloved was training to become a doctor in Edinburgh.

The letters (INVMG.2004.025.001-0041) give a compelling insight into life within the Highland Military Zone during World War Two.  They are also filled with the yearning of a young man in love, separated by the strictures of wartime from his beloved.  During the war, access to the Highlands was often restricted and local people and military personnel required special passes to enter the region.

Kenneth’s Christmas Eve Letter, follows on from a letter sent on the 9 December 1940, in which he charmingly falters into a hesitant proposal of marriage:

What sort of husband do you think I should make?  I don’t know I’m rather weird really aren’t I?  All this is vague and may sound daft but I am very, very serious minded.  In short, have you ever thought of yourself as a parson’s wife?  Or am I being impudent?  If you think I am daft please tell me so and put me out of my misery.

Happily, by the time Kenneth writes his Christmas letter, it appears that Rosemary has accepted his offer that she become ‘a parson’s wife’, as by this time Kenneth is already making clear just what sort of wedding rings they might have!

As well as suffering restrictions on travel between Edinburgh and Inverness, Rosemary and Kenneth also experienced the scrutiny of the government’s postal examiners.  About 10,000 postal censors were employed during world War Two.  Their job was to open and examine civilian and military mail in order to look for any information that might be useful to the enemy.  Often whole words or phrases might be obliterated because it was feared that they might be used by spies to give coded messages about the nation’s war effort.  Many of the envelopes received by Rosemary had been opened and were then sealed shut again with printed tape saying that the envelope had been opened by an examiner and giving that particular censor’s unique identifier.

We are not sure why Kenneth opens his letter to his ‘dear’ with a presumption that she will ‘probably have finished smashing the china’.  This is one of the many enigmas lit by this one-sided correspondence record.  What we do gain, however, is a picture of the social life of the Cathedral during the Christmas period and the ebullient spirit of Highlanders keen to celebrate in the midst of, often literal, darkness and uncertainty.

Both Kenneth and Rosemary were in positions of significance and necessity at a time of war.  As is clear from this correspondence neither were free to be with each other on Christmas Day, each having their specific duties as cleric and medic.

War time Christmas celebrations were quite different to those we might experience today.   One of the key strategies of the German military was to attack shipping bound for Britain, restricting British imports and potentially starving the nation.

To deal with extreme shortages, the Ministry of Food instituted a system of rationing.  Each household had to register at chosen shops, and was provided with a ration book containing coupons.

Turkey would have been completely unaffordable in war time Inverness.  Other cuts of meat would also have been terribly expensive. The weekly meat ration for a family of four still would not have covered the cost of a small chicken.   Many tables may have been graced with home-reared chickens or caught, or even pet rabbits!

Christmas cakes and puddings were unlikely to have contained dried fruit, nuts and marzipan, let alone brandy.  Alcohol was extremely expensive. Brie and Camembert would also have been off the menu, as in May of 1940, Germany had invaded and brought a large part of France under occupation.

And so to the Reverend’s plans for the festivities during Christmas 1940, as set out in this letter.  As some of us prepare today to offer and share in feasting with family and friends spare a thought for the Reverend Brown and his busy week of hosting and being hosted at tables that may have been laden with such culinary feats as ‘Left-over Delight with Oxo Gravy’ or wobbling Blancmange:

The Prov [ost] has asked me if I would like a few days off.  Of course I leapt at the idea but cannot think when it could be.

The next Tuesday a Scouters’ Party.  The next Thursday the Troop Party and by that time the choristers will be getting ready to carol all around the place.  So what?

Anyhow, I shall probably have dyspepsia after the high living.

This is, in fact a letter without any point at all, except the joy of writing to you and to say that I loathe platinum in any jewellery and especially in rings.

Yours with love, Kenneth.

Kenneth and Rosemary went on to share many Christmases together.  Their daughter, Gill, donated her father’s letters to the Museum in 2004.  We are very grateful to her and to all who gift us with their families’ treasured heritage; placing it in safe keeping for the future and to be shared with all who live in and visit the Highlands as a unique record of the lives of those who have lived through all the events, great and small, that make up our human story. 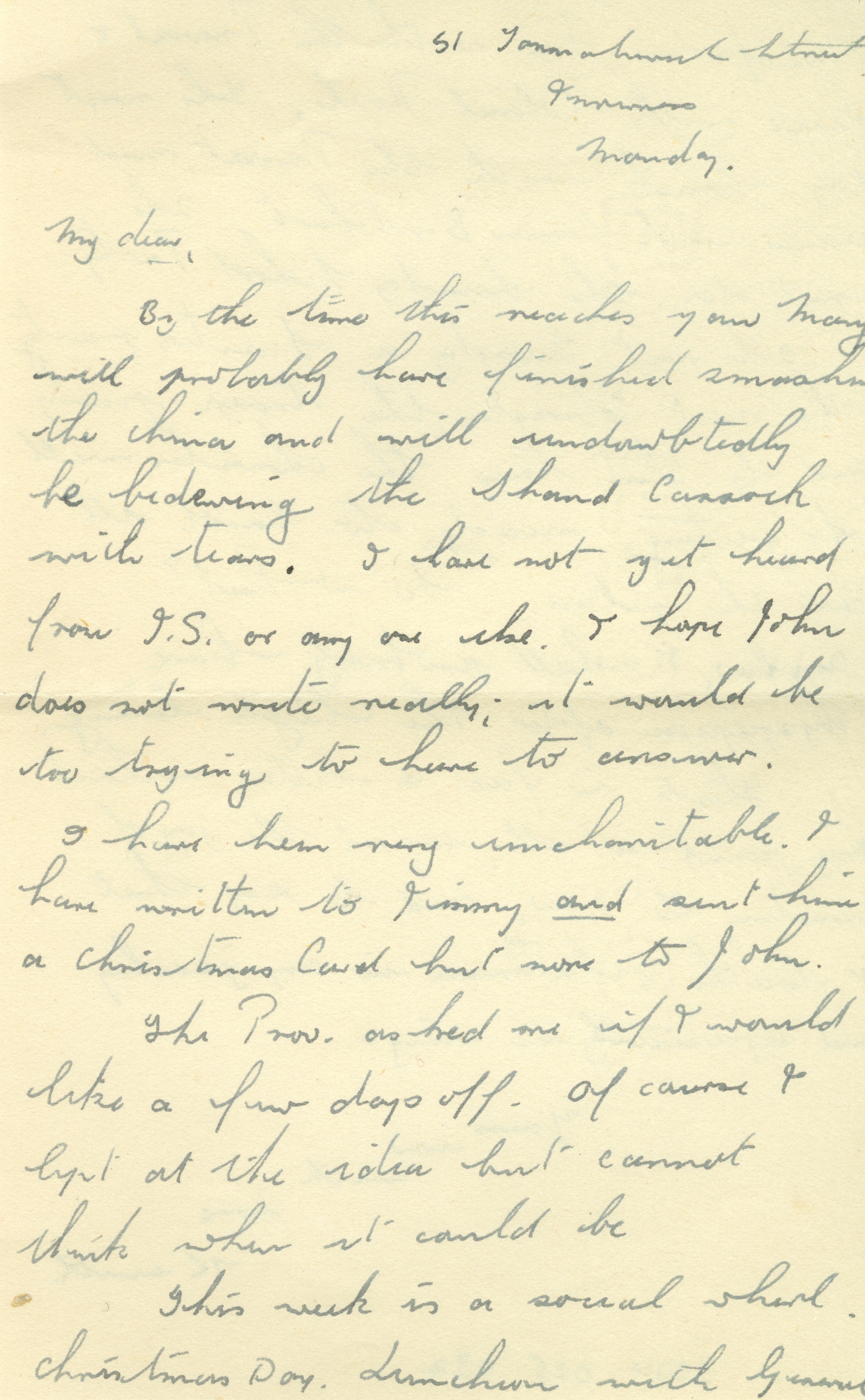 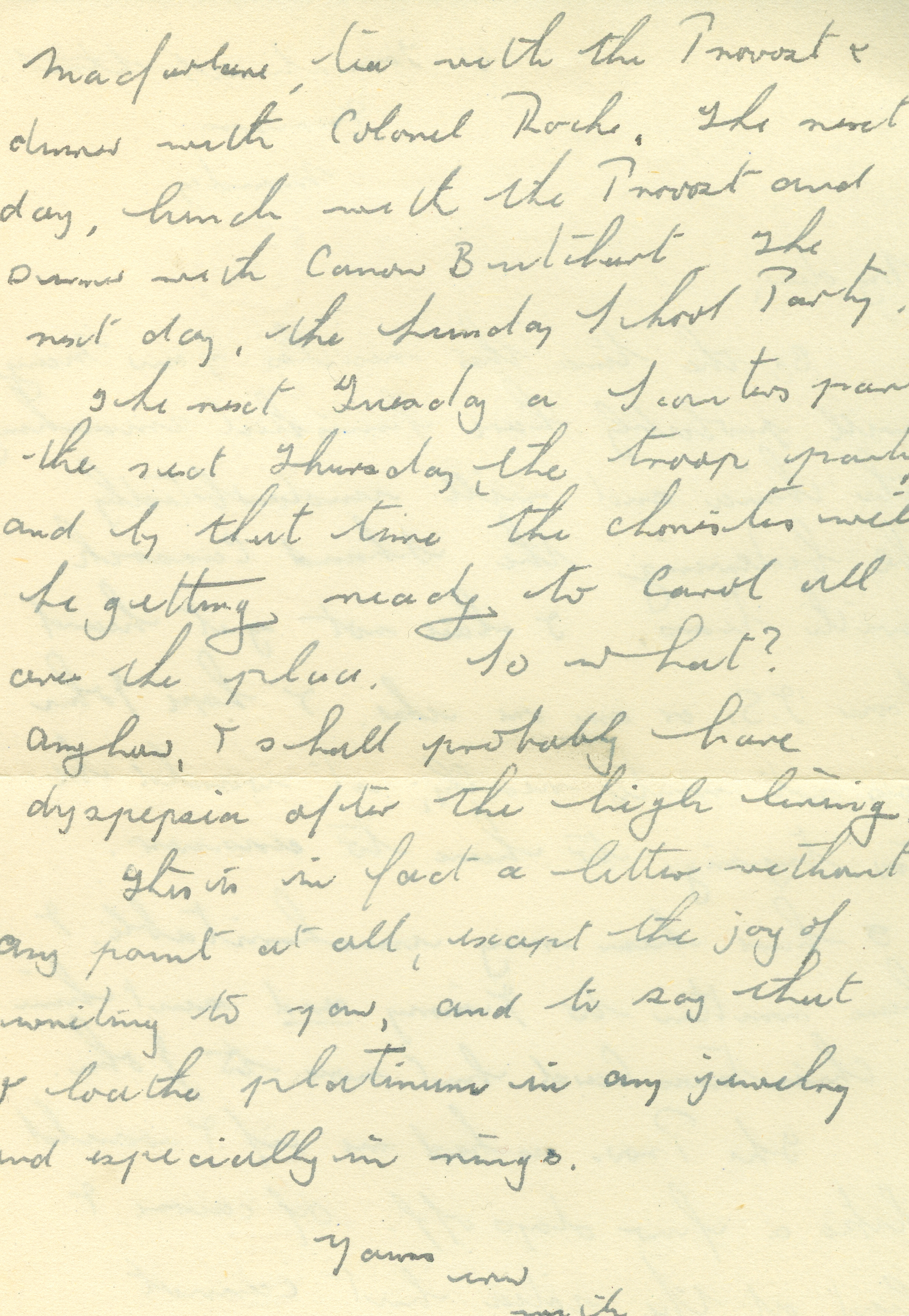