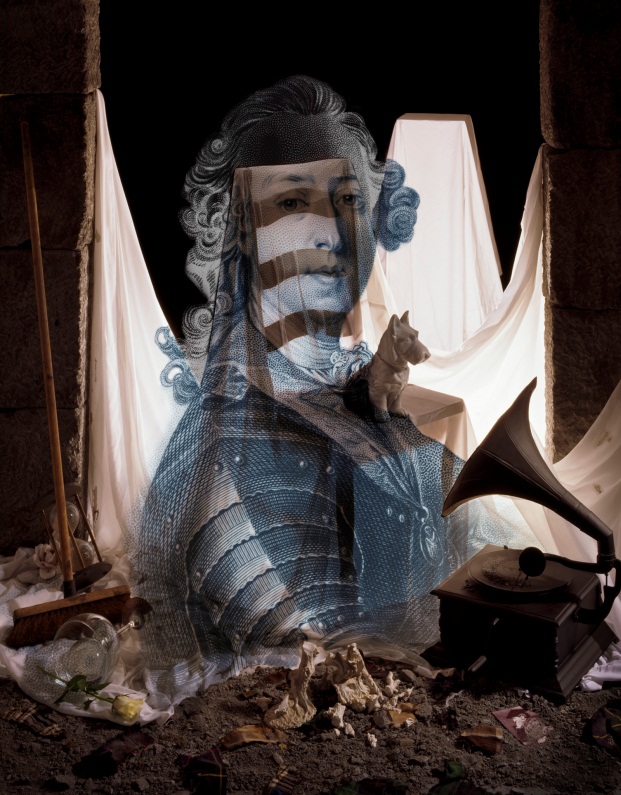 Jacobites by Name, originally commissioned for the Scottish National Galleries, inventively combines photography with painting and installation. The result includes new works such as Lochaber no More (2015) which links two images of Charles Edward Stuart, commonly known as Bonnie Prince Charlie, the second Jacobite pretender to the throne and instigator of the failed 1745 Jacobite Rising. The first of the images shows Charles as a young man and the other much older.

To make his photographic works, Colvin constructs a set in his studio, using furniture and ornaments, and then paints images on to these three-dimensional objects. When seen through the lens of his camera, a two-dimensional image is formed, a blend of reality and illusion. The works are a powerful evocation of the passage of time and the melancholy of lost Jacobite hope.
In his work, Colvin also alludes to the tradition of secret symbolism and optical illusionism in Jacobite-related art; because support for the exiled Stuarts was dangerous and could lead to accusations of disloyalty to the Crown, ‘secret’ portraits of the Pretenders and icons associated with the Royal Stuarts were to be discovered as surprise elements on many objects including drinking glasses and concealments behind the lid of closed boxes.