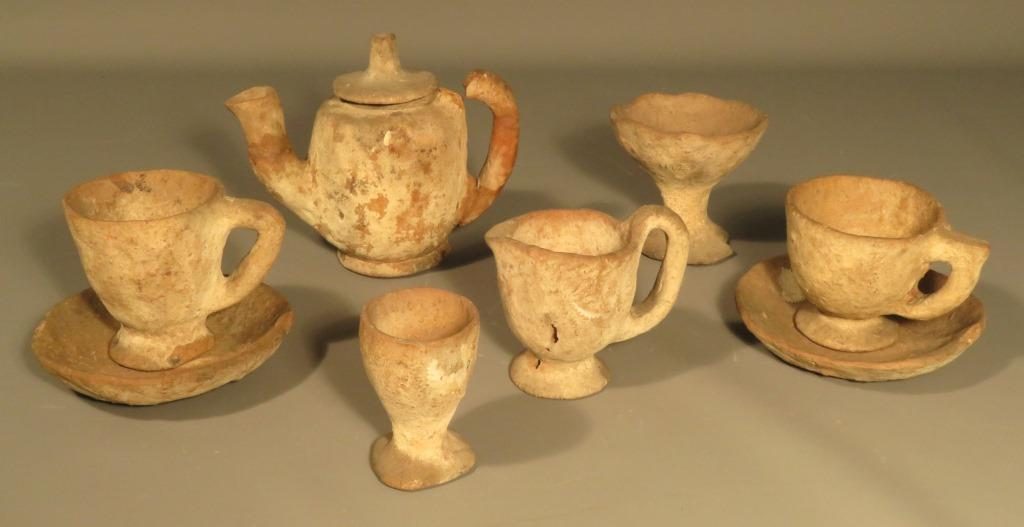 Pieces of Barvas Ware donated by Mrs Quiggin, who is mentioned in I.F. Grant’s Highland Folkways as having seen pots being made first-hand by the women of Barvas.

Here at the Highland Folk Museum we have a small collection of rather interesting and unique pots, more interesting than they appear at first glance. The type of pottery is called Barvas Ware and it hails from the small village of Barvas, on the Hebridean island of Lewis. It was made from the mid-19th century until production died out in about the 1930s. The pots are said to be made in imitation of the factory produced china tea-sets of the time that were flowing out of the pottery epicentres such as Staffordshire and the Scottish Lowlands. The low fired, hand-made Barvas Ware forms were “glazed” with milk, which gave the surface a distinctive white-ish coating. 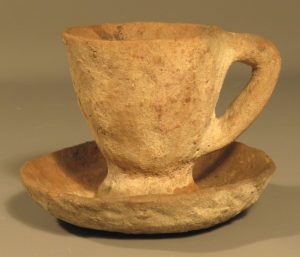 Barvas Ware, as can be seen from the photos, is crudely made and rustic in appearance.  It would take some stretch of the imagination to believe that anyone was fooled into thinking that they are drinking out of a fine china teacup.  But that wasn’t the point with Barvas Ware.  It’s a totally vernacular craft; one which combines a traditional way of making with a creative response to outside influences.

Barvas cup (KIGHF.2017.038.a) next to a typical factory produced china cup.
Note the similar styling of the handle and foot.

To better understand Barvas Ware, it is necessary to take one step further back, to look at another type of pottery vessel that was produced and used in the Western Isles area.  Craggans (otherwise known as crogans, cragains or croganans) are globular vessels that are prehistoric in style, but were in common use in places such as Tiree, Skye and Lewis up to the mid-19th century.  These pots were used for storing and cooking food. 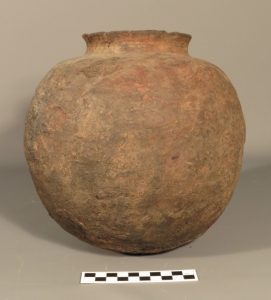 By the 1850s, a regular ferry service to Lewis had begun to bring more visitors to the island.  One of these visitors, Dr Arthur Mitchell, was particularly interested in craggans, as he saw these as a curious hangover of an ancient technique of making and a fascinating link to the past.

In his book “The Past in the Present. What is Civilization”, published in 1880, Mitchell relays his account of “discovering” craggans.  Upon visiting Barvas in 1863, Mitchell came across a stone-breaker sitting at the side of the road, eating his lunch out of a craggan.  Considerately waiting until the man had finished his lunch, he then bought the vessel off him and carried it away.  Word got around about this exchange (and the money made from the sale) and Dr Mitchell was subsequently invited to the house of the maker of the craggan.  (As an interesting side note, craggans were made exclusively by women, although there is no explanation offered for this other than tradition.) 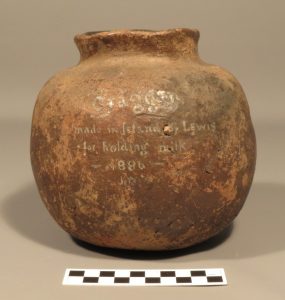 About making the pots: “The clay she used underwent no careful or special preparation. She chose the best she could get, and picked out of it the larger stones, leaving the sand and the finer gravel which it contained. With her hands alone she gave to the clay its desired shape. She had no aid from anything of the nature of a potter’s wheel. In making the smaller Craggans, with narrow necks, she used a stick with a curve on it to give form to the inside. All that her fingers could reach was done with them.  Having shaped the Craggan, she let it stand for a day to dry, then took it to the fire in the centre of the floor of her hut, filled it with burning peats, and built burning peats all round it. When sufficiently baked, she withdrew it from the fire, emptied the ashes out, and then poured slowly into it and over it about a pint of milk, in order to make it less porous.”(1)

Mitchell goes on to recount how the Barvas potter then proceeded to show him some other items she had made using the same technique, including “imitations of Staffordshire ware”.  This is what has since become known as Barvas Ware.  Mitchell took his craggans and tea-set curios back to the mainland, and there soon became a demand for this type of ware, from enthusiastic scholars and tourists. Barvas Ware became available to order, and was advertised in the press in Edinburgh and London in the 1890s. 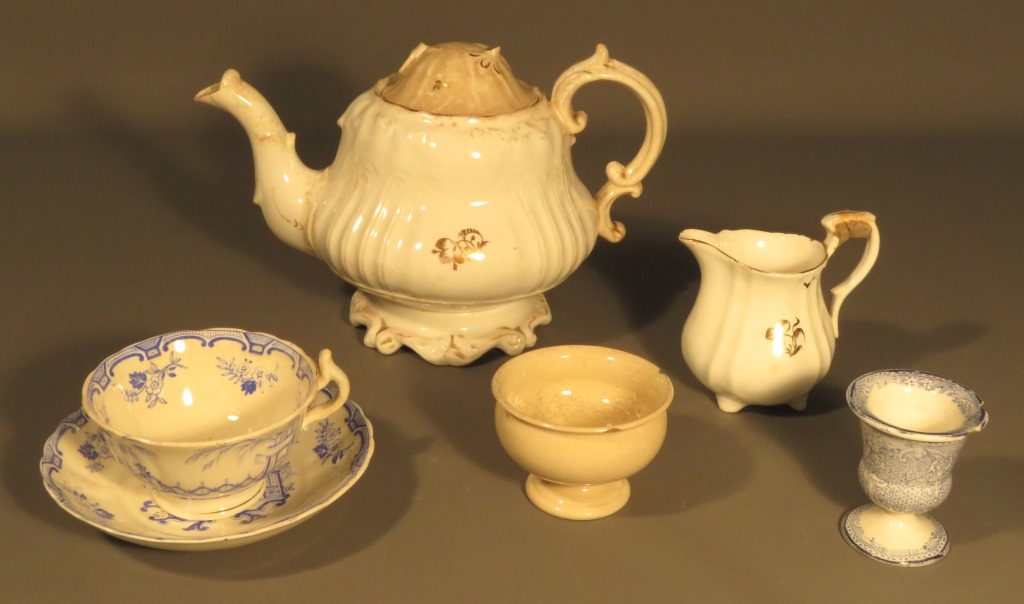 Selection of ceramics from the HFM collection which have similarities to the Barvas Ware forms.

It is thought that Barvas Ware was made for this tourist market, rather than made for use in the homes of the islanders.  It could be that a small number of enterprising women from Barvas recognised the outside interest in this ware, and set about making copies of modern forms in their established way (peat firing and milk-glazing the locally dug clay) – giving us this unique meeting of the past and the present.  The last known tea-set was commissioned in 1935 for the Wellcome Institute collection in London, so it can be said with some certainty that the 47 pieces of Barvas Ware we have here in the collection date between the 1860s and the 1930s.

The pots might have been used, it is hard to tell. Some of our Barvas Ware has a very obvious white/cream coating on the exterior, but on the inside of the pots the “glaze” is barely visible, suggesting that it might have worn off through use.  It’s hard to imagine that these low fired pots would have been much good for liquids, as they would be pretty porous, but egg cups and sugar bowls might have been used more effectively. The spouts of the teapots are often blocked with clay and would be quite useless at pouring. 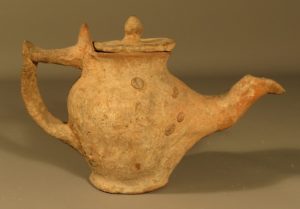 I’m fascinated by the peculiarity of the milk glazing; it seems to be very local to the area. Barvas Ware has a real charm to it; it’s not attempting to be fine china, but is a response to mainland material culture, and a way of utilising existing skills to make some extra money to support the crofting lifestyle. As noted by Dr Mitchell, it is a continuation of historic methods of making, truly a reflection of the past in the present.  It represents a marriage of local materials and techniques with designs and forms from further afield. The kind of china that was being imitated would have been on display on dressers in Highland and island homes, saved for special occasions.  Barvas Ware was on a very small scale production; there might only have been a handful of women involved in the making of the pots, in one very remote corner of the country, but its appeal travelled wider than its locality. 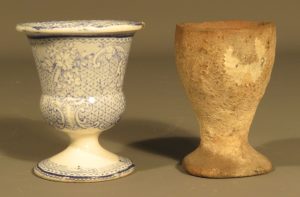 Barvas Ware is a relatively unknown craft.  Many of the existing articles written about Barvas Ware and craggans are by Professor Hugh Cheape of Sabhal Mòr Ostaig, University of the Highlands and Islands. Prof. Cheape previously worked as a curator at the National Museum of Antiquities of Scotland, where he got to know their Barvas collection well and conducted research into the history of the ware, travelling to Barvas to investigate further.  Cheape managed to track down the identity of the stone breaker from Mitchell’s account, a William Matheson of Brue, so the pot in question, which is now part of the National Museum of Scotland’s collection, he accurately refers to as ‘Crogan Uilleim’ i.e. The Crogan of William.

Cheape notes that craggans were recorded as being used to transport milk from the shielings to the townships “where the crogan was cradled in moss and placed in a creel which was carried on the individual’s back”(2). Personally I am very fond of this image as it connects the basketry collection, which we spent the first few months of the project working on, with this Barvas part of the collection. If only the carrier had been simultaneously spinning yarn on a drop spindle too…!

Cheape, Hugh. (1992-93) Crogans and Barvas Ware: Handmade Pottery in the Hebrides, The Journal of the School of Scottish Studies, University of Edinburgh. Vol 31. Pg. 109-127