In the last post I introduced readers to Barvas Ware – the slightly lumpy looking pots from the village of Barvas on the Hebridean island of Lewis, made from the 1860s until the 1930s.  The pots were handmade from local clay, fired in peat fires and then “glazed” in milk, resulting in a white-ish coating on the surface. 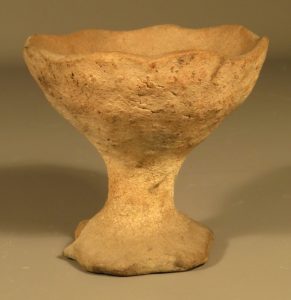 As I have a background in ceramics (although as a disclaimer, I haven’t actually made anything in clay for many years), I was very keen to get my hands dirty and to try out this unusual method of making and firing. Perhaps unsurprisingly, the Barvas method wasn’t covered on my degree.  Now I know about it and love it, I think it should be added to every syllabus as an example of vernacular ceramics from the UK.

To share the appreciation of Barvas ware around, Rachael and I encouraged our colleagues here at the folk museum to have a go at the making too. We held a “make a Barvas-inspired pot” session in December, just before Christmas.  I bought some red earthenware clay from a local pottery, into which I mixed some builders sand.  The clay for this kind of firing needs to be relatively “groggy”, meaning rough, and with coarse matter mixed in with it.  This makes the clay more able to withstand the thermal shocks of the temperature increases and decreases of the open fire.  Original Barvas ware is made from locally dug clay, which probably would have been quite unrefined and rough in its raw state anyway.

Here are some images from our fun morning of making: 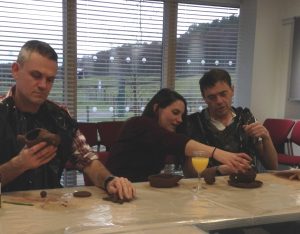 Hannes, Sarah and James getting to grips with the clay 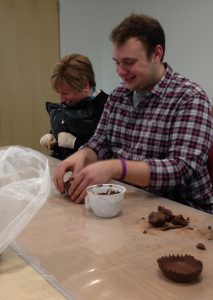 And here are some of the resulting pots:

Rachael took some clay home with her to make a teapot: “Although I’ve got a background in art I haven’t ever worked with clay, and so I was determined to challenge myself and create my own teapot (complete with dot decoration!) as they’re my favourite Barvas items. During our project I had spent some time mending one the teapots in the collection with a broken spout and handle, and through this I was aware of how thick Barvas pottery is, although this was something that I really struggled to imitate. To make the body of my teapot I initially created a bowl, and from there built up the walls by adding smaller bits of clay to the edges.

This technique worked well to form the lower half, but by the time I had shaped the top of my pot I couldn’t reach down to add more material or smooth the bottom surfaces, meaning that the walls ended up very thin and uneven, and a lot more dainty than the real thing. I also couldn’t work out how to create a curved spout with a pouring hole running the whole way through, so ended up crafting it around a sausage of clingfilm, and then slowly pulling the clingfilm out. I’m sure that isn’t a technique that was used on Barvas but it seemed to do the trick!” 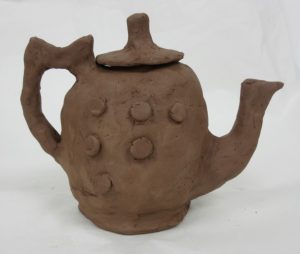 The pots were then left to dry out fully.  Fast forward to February, and we had unintentionally chosen the coldest day of the year so far to give the firing a go! It was a chilly -6 degrees outside.  We held the firing up at the township, in the replica 18th century buildings.  These buildings have central hearths in them for peat fires, just like the Hebridean blackhouses where the Barvas ware would have been fired.  Originally these fires would have been kept going all the time, as life revolved around them for warmth, light and for cooking food. Our fires are lit daily and then gradually die down. We light them even when the museum is closed to the public, to help keep the buildings dry and to preserve the thatch. 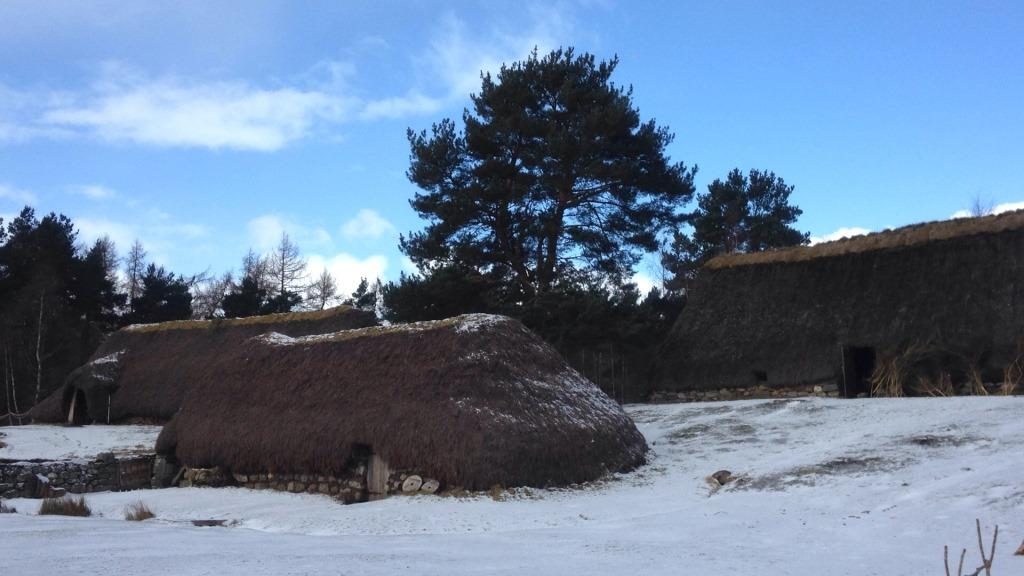 The Township. Back left – Tacksman’s House, Back right – Cottar’s House 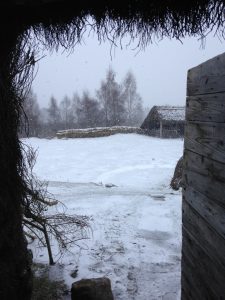 A snowy scene outside the Cottar’s House 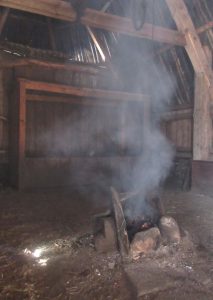 The hearth inside the Cottar’s House

There are not many recorded details about the traditional Barvas firing process. All accounts are consistent in that the Barvas ware pots were fired in peat fires, in the hearth in the middle of the house, and that the pots were dunked in milk whilst still hot, but the finer details are all a bit vague.

There’s no hard and fast rule for how long to keep the pots in the fire. Although one account does specify 2 hours, this is rare in its accuracy and other accounts range from “when ready take out of the fire”, “…until they are quite red”, “put in the fire until red hot”, and my favourite vague detail, “…when sufficiently baked, she withdrew it from the fire”. But there are so many variables with firing, that this vagueness isn’t surprising. Knowing how ones clay reacts to ones peat fire just comes from experience.

We set up two fires – one in the Tacksman’s House and one in the Cottar’s House. We arranged the pots in the hearth and built a fire around them – we started with kindling, before adding dried peat, until the burning peat was built up all around and on top of the pots.  I kept the fires going all day, adding more peat as it burnt down. The peat produces a really hot, even fire. It’s also very smoky and the smell really saturates into everything. It takes a lot of washing to get rid of the peaty aroma from hair and clothes! 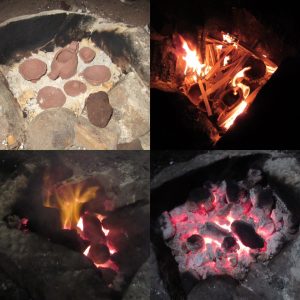 Different stages of the firing 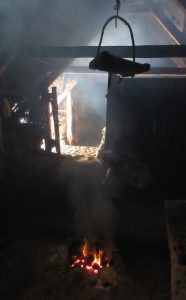 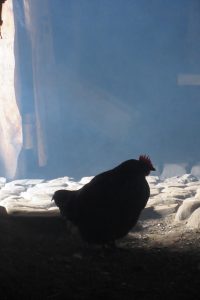 An inspection from a local

For those readers who are scientifically minded or that have a ceramics education, you may be wondering about firing temperatures and timings, as was I. For further information I looked to an experiment carried out in the 1930s by anthropologist Wallace Thorneycroft (1). He performed detailed experiments into how some prehistoric pottery found in Perthshire would have been fired. Although Barvas isn’t prehistoric, it’s a similar method of firing. He concluded that the pots he examined probably would have been fired in wood or peat fires for about 7 hours then left in the hot ashes for 10 hours, having reached a maximum temperature of between 500 and 800 degrees C.

Our day of experimenting really was a chance to have a go at it, and wasn’t an exact science, but it was useful to look to existing records for an idea of how pots might have been fired in the past.

So how did it go…? Read Part II, later this week to see the results!