Last week, Rachael and I battled into work through a snow storm to attend a craft session with folk museum employee and resident spinner, Marion.  As we have recently been working on the textile craft hand tool collection, we wanted to get to grips with how some of the objects are used, and to have a go ourselves. When the museum is open, Marion works here as a costumed historical interpreter.  She’s been spinning her own wool for years, and can be found up at the 18th century township spinning on a drop spindle, or weaving at the loom in the Weaver’s House.  She makes traditional 18th century garments from scratch; some of the costumes that are worn here at the museum have been hand-made by Marion, such as the tunic below. 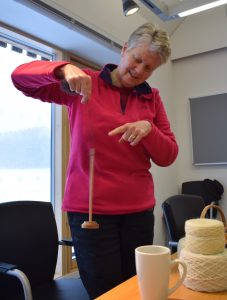 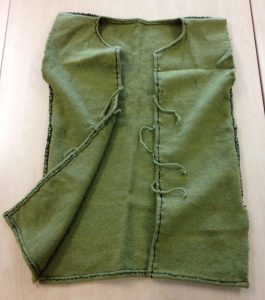 She brought in a range of wool to show us, including some raw fleece that she sources from local farmers; the white fleece is from the Shetland flock, the dark brown is from the Jacob’s sheep.  She also brought in examples of wool that she’s spun and then dyed from natural materials such as madder, ragwort, birch bark, bracken and lichen.  Once she’s made the yarn, she either uses it as single ply for weaving on a loom, or twists together two strands to make a two-ply yarn suitable for knitting with. 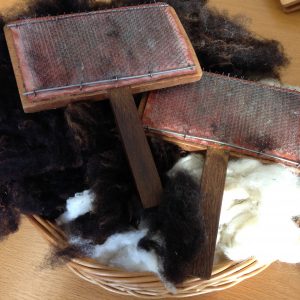 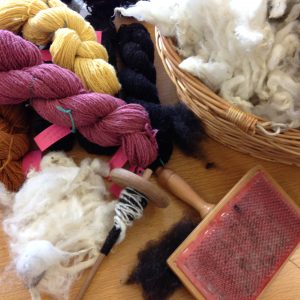 Spinning is a process I’ve never tried, so I was really keen to have a go in order to get a better understanding of some of the tools such as wool cards and spindles that we’ve become familiar with over the past few months.  We have quite a few spindles in the collection, and every one is a slightly different shape, a different weight, and has its own unique feel in the hand.  Marion has many drop spindles herself, including one made from a paintbrush with a pebble whorl, but she has one particular favourite; that one was out of bounds for our session!  It’s the perfect weight for spinning and suits her down to the ground (pun intended). 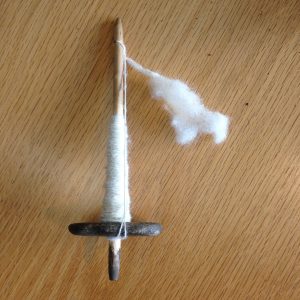 Before spinning, the fleece needs to be combed through, or carded.  For this we use a pair of carders, or cards. To start with, you place one card on your knee, and place a small amount of fleece across the fine teeth of the card, evenly distributing it across the surface.  Then, the other carder is drawn through this one, so the fleece is smoothly combed through.  This is repeated a few times until the fleece is tangle free and can then be easily taken off the carders, and either rolled into a “rolag”, a sausage-like roll of fibres, or loosely folded over, ready for spinning. 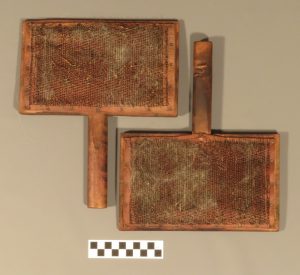 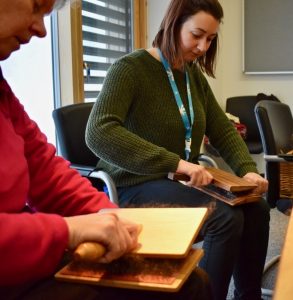 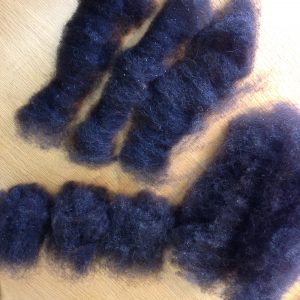 Carding is like brushing hair. It’s a very relaxing and soothing activity! I imagine that, just like stroking pets reduces stress and lowers blood pressure, carding may well have the same benefits! Take it up, it’s good for your health. So then the spinning can commence.  I’ve seen this done so many times, but never had a go.  It really isn’t as easy as it looks.  I selected my spindle, a large-ish wooden stick with a large wooden whorl.  Marion started it off, by tying a twist of fleece to the spindle and working her spinning magic until there was a long enough length to wrap around the spindle.  Then I took over. I wrapped the length of yarn that she’d already made underneath the whorl, around the stem, then back up to the top, looping it around the notch in the top. This keeps the yarn held in place when the spindle is suspended.  Then it’s a matter of spinning the spindle (clockwise was the more natural direction for me) whilst simultaneously teasing out the fleece fibres from the carded bundle, to create a fine yarn which is twisted together from the weight and motion of the spindle.  As you go along and the yarn gets longer, the spindle inches closer to the floor.  And sometimes it hits the floor, when the spinner (i.e. me) isn’t very good and the yarn breaks. It’s a good workout for the arms, as you raise your arms as the yarn lengthens, until you can reach no more.   Then you stop and wind the yarn onto the spindle, then continue on. Once the fleece bundle has run out, you just add more in, and keep going.  Until you have enough for a jumper. I don’t think I’ll have one in time for Christmas…but perhaps by 2020. Whilst we had the spinning expert on hand, we showed her the collection of spindles that we’ve been working on recently.  We have one with an unusual notched end, and Marion demonstrated how the yarn would have wrapped around it, which was great to see. Having tried the process, I have a lot of admiration for handmade textiles.  Using a spinning wheel rather than a drop spindle would speed up the process, and probably improve the consistency of the yarn, but it still an awful lot of effort from start to finish.  How satisfying it would be to make something from scratch though! I got the hang of the technique in the end, and managed to produce a (very) small ball of wool.  It’s rather uneven and lumpy, but I like to think that adds to its charm, rather than it just being badly spun.  I took it home and crocheted a star with it, so here is the product of my efforts, a fleecy, uneven, lumpy, festive star. Merry Christmas to all!