One of the biggest challenges that we have faced while working on the textile craft tools is that over the years many of the items have become fragmented.  Our initial task when beginning work on the tools was to decant everything from the boxes they were stored in and sort the objects in to those with labels and those without. At the end of this we were left with a table of unidentified bits and so throughout the two months that were spent documenting, photographing and cleaning the textile tools, I frequently wandered around the store holding fragments of wood, wondering if this colour looked the same as that, or if these corroded nails lined up with those nail holes. 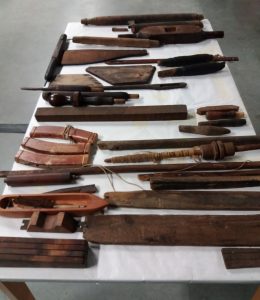 Our table of unidentified and unlabelled bits and pieces.

One object that was particularly puzzling is KIGHF.RD.0026, a jack reel, used for winding and measuring skeins. When discovered in store the jack reel was laying on its back, with two missing arms and only one leg that was mouldy and roughly hewn. Mould removed, I consulted my table of detached bits to see if I could find some spare arms or legs that fitted and looked right, but eventually defeated I resigned myself to returning the reel to the shelves incomplete. However, help was at hand in my quest to reunite bits and pieces together as the Highland Folk Museum houses an archive of photos taken by I.F. Grant of her collection on display in Iona, Laggan and Kingussie. I.F. Grant was very interested in textiles and was known to show visitors around the museum while spinning with a drop spindle, and it seems that she was particularly fond of this jack reel as she took a lot of photos of it. 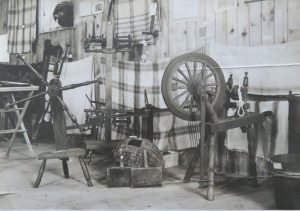 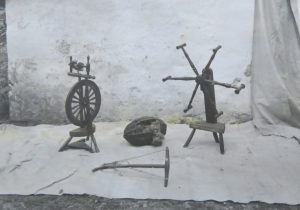 Jack reel RD.0026, top on display in Iona in the 1930s and below, with other objects relating to spinning

It was through consulting these images that I realised that the remaining roughly hewn leg was actually a replacement, and that the original legs had been more decoratively carved. With this in mind I once again sorted through the table of detached fragments and found the two legs pictured – it hadn’t occurred to me that these could be legs as the very end of both has been broken off due to woodworm damage, and I had assumed they were part of a much longer length of wood! Legs found, I moved on to searching for the missing arms. Legs found, I moved on to searching for the missing arms. During the 1990s the textile crafts tools had been audited and if no number could be found, were often reaccessioned under a new number. This was the case for the two missing arms, which had been accessioned as a group along with an arm detached from another jack reel, but were matched to RD.0026 as the break pattern on the ends of both was consistent with the break pattern upon the hub. 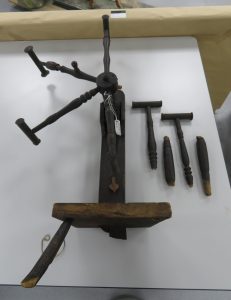 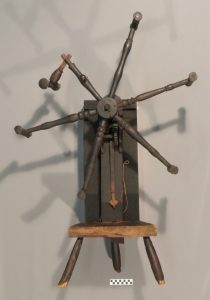 With all of the elements found, they were re-positioned using animal glue, which is often used in furniture conservation as it is reversible in water even after many years. As the very ends of all three legs are weak and powdery due to woodworm damage I decided that the reel shouldn’t be stored standing, but instead lying on its back. A custom box was created using Correx and lined with inert foam to prevent the reel from sliding when the box is picked up. 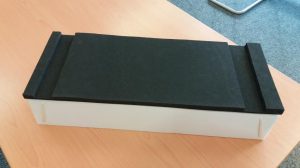 A second and even more puzzling item from within the textile crafts objects is RD.0036, an upright wool winder, which has quickly become my favourite object that I’ve worked with so far. These winders are used to wind and unwind skeins of wool, and have adjustable drum bobbins to allow for different sizes of skein. 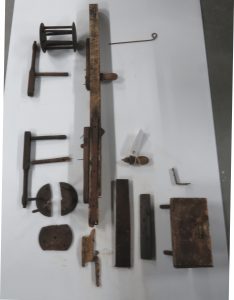 While auditing the collection of winders the only trace of RD.0036 that we could find was one length of wood, badly damaged by woodworm, which formed the central upright of the winder. I.F. Grant had also marked this number on to a small base with very tiny legs, but this looked far too small to support anything as tall as an upright winder and so we assumed that the base was from a child’s stool or chair and had been mis-numbered. Upon closer inspection, however, the colour and level of deterioration of the wood (those woodworm holes are sometimes useful!) of both the upright and stand were very similar, and so I decided that they belonged together after all. Knowing that the winder was possibly broken and mended before it became part of the collection, resulting in the very small legs, I set about looking for other elements of this object that may not immediately match the elements I already had. I was very lucky that the Folk Museum has 5 other upright wool winders in the collection, and using these as a guide I was able to work out that the object was still missing two drum bobbins, two brackets to hold the bobbins in to place and a wooden screw element.

Having previously pieced together the jack reels I knew that some of the element I was looking for could be unnumbered, or numbered wrongly, and this was certainly the case as the missing screw element was found accessioned within a group with three spinning wheel elements. I had noted two brackets on my table of bits that appeared to belong together, and these were matched to this winder as the ends of the legs of the brackets perfectly lined up with the nails protruding from movable sections of the upright. After this I looked through all of the drum bobbins that were accessioned and found a matching pair that fitted well within the brackets. 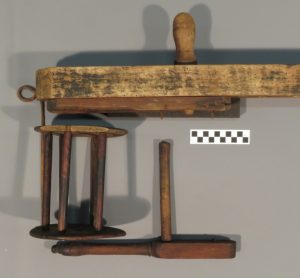 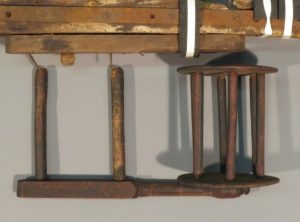 The brackets and drum bobbins were thought to belong to the same object as they all fitted well and matched to the nails protruding from the central upright.

Eventually I had gathered together 14 elements that I believed had originally come from this object. As we could not be certain that all of these pieces did indeed belong together I decided that they should be housed in a box, laid out to give the viewer some idea of how they would have originally sat. To do this I created a large box and within it arranged inert foam, custom cut to support all the elements in the right position and at the right height.

A custom box was created so that the separate elements of the winder could be stored together.

Several weeks after completing this box I returned to the museum’s archive to look through the photographs again and it came as a complete shock (and relief!) that out of the corner of my eye I found a picture of this reel hiding behind several chairs whist on display in Iona. One of my favourite parts of my job is giving objects the care and attention that they’ve not always received, and it’s especially rewarding when you find evidence that you’ve successfully pieced together something that has been apart for so long! 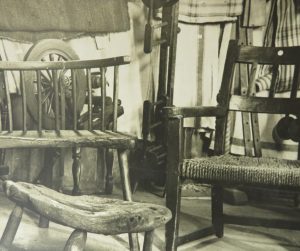 In a photo from the 40s the winder can be seen hidden behind some chairs.