With a heavy heart, we now bid farewell to baskets. All the records are updated, the baskets that needed it have been treated for pest infestation, and the collection, once jumbled up on crowded shelves, has been rehoused.  We’ve organised them into basket type and function, and the shelves have been rearranged to make the best possible use of space. Each basket is resting on inert foam to offer support and cushioning for long term storage.  The most fragile baskets are sitting in their own box or tray, for extra care. 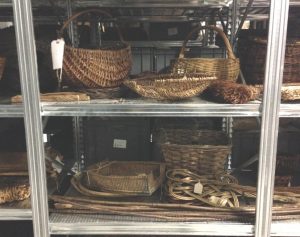 The basketry and straw-work shelving before our project started 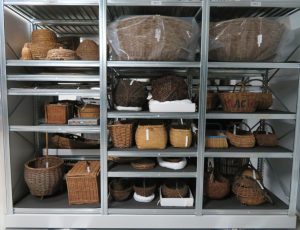 The basketry collection after documentation, conservation and re-storage.

So, mar sin leibh (goodbye) to baskets and latha math (hello) to textile craft hand tools.  This part of the collection is concerned with the homemade production of textiles, from processing the raw textile fibre, through spinning it into yarn and then winding it into skeins (loose coiled lengths of yarn) or onto bobbins it so it is ready to weave or knit with.  We have spinning wheels and looms in the collection, but for this project we’re focusing on the smaller tools and implements.   Like with baskets, this is another whole world of objects that I previously had little specific knowledge of.  Let me share with you what I’ve learnt so far.

These are tools for preparing the raw material, which in this part of the world is mainly wool fleece (for making wool or worsted) or the flax plant (for making linen). 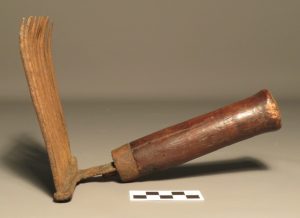 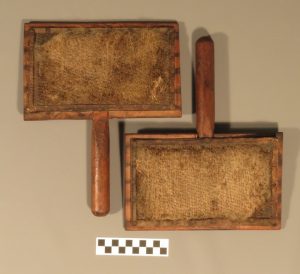 These are all various ways of combing or brushing through the wool or flax fibres, so they are tangle free and the fibres are lying neatly in the same direction.  The brutal looking bed of nails at the bottom is a heckling comb, specifically for processing flax into the long, hair-like, flaxen fibres that is spun into linen.

Interesting fact:  The heckling of the flax was undertaken in a heckling shed.  Unlike working in deafeningly loud weaving sheds, the hecklers had enough peace and quiet for one of their group to read aloud the news sheets or political pamphlets of the day.  As a result of this, these men became very well informed and knowledgeable, and were known to ask well prepared and probing questions at public gatherings…giving us the term “heckling”.

These are tools for turning the fleece or plant fibres into yarn.  Once combed through with the tools above, the mass of fibres can be spun into yarn.  The simplest way to do this is with a spindle. Spindles are ancient tools; civilisations all over the world have made use of the spindle to create yarn for thousands of years.  There are different variations of spindle, but essentially they work by pulling the fibres out under tension, and twisting them together to hold in place.

Gravity is made use of by “dropping” the spindle, to aid this process.  That’s what a whorl is for – it’s an added weight that sits on the spindle to provide the right level of momentum and weight to the dropping and twisting motion of the spindle. Some spindles have this weight built in, as they are thicker and heavier at one end, as in the spindle above.  And a distaff?  Well that’s basically a stick to hold the raw fibres in a bundle whilst they are being spun into yarn. It would be tucked under the arm and rested on the shoulder, leaving the hands free to spin or indeed to perform other crofting life duties.  There are reports of a “good lady in Orkney whom John Firth assures us could herd cattle, sing, dance, run backward and forward and produce yarn on a spindle at the same time!” Something to aspire to I think.  (Grierson, S. (1985) Whorl and Wheel, The Story of Handspinning in Scotland. Forfar: Oliver McPherson Ltd. pg.8) 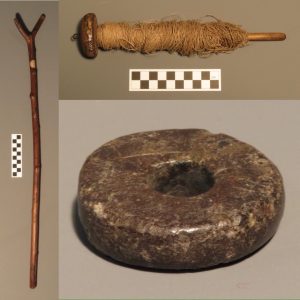 These are tools and implements to further prepare the finished yarn after it has been spun, to get it ready to be woven or knitted with.  They all have the ultimate job of taking the length of yarn, and winding it into a skein, a ball, or onto a bobbin. 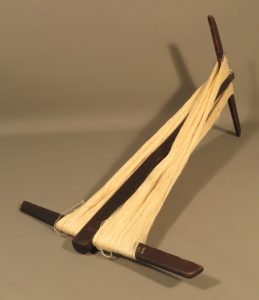 A crois iarna (translates from Gaelic as iron cross – although they are actually wooden) is a way of winding the yarn into a skein.  The yarn is wrapped around the cross bars in a figure of eight motion, and the person doing the winding would keep count of how many wraps were on the crois iarna, in order to measure it.   These winders are also commonly known as niddy-noddys.  A great name, I hope you agree. 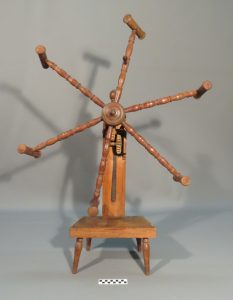 Jack reels offer a more advanced way of skeining and measuring wool.  Who’s Jack Reel?  He has 6 rotating arms to wind the yarn around, and interconnected cogs that measure the number of rounds that have been wound.  Once the desired amount of rotations has been reached, a metal strip on the reel makes a twanging noise, alerting the person doing the winding that the skein is now the correct measurement and length.  For this reason, these are also known as click reels.

Another variation is the clock reel, which has a clock face that displays the amount of rotations.  We have a rather fine clock reel in the collection, made by Alex Hogg of Haddington, c. 1790. 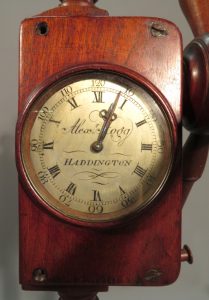 Once the skein had been made (with either a crois iarna, or a jack, click or clock reel) the yarn could then be easily washed or dyed.   After this step was complete, it was then necessary to unwind the yarn onto a bobbin or into a ball, so it could be woven or knitted with.   This is where wool winders, otherwise known as swifts, come in to the process.

Wool winders are made from a base – sometimes this was made from an upturned tree trunk and branches, as above – and two cross arms that rotated atop this stand.  Originally the winder would have had an upright peg protruding from each arm (these are now missing).  The skein would be looped around these, and then the yarn could be unwound onto a bobbin etc.  Winders are known as sgianan in Gaelic, although I.F. Grant had recorded these as skianans in her original catalogue, either intentionally or mistakenly replacing the “g” with a “k”.

So there you have it, a whistle stop tour of the textile craft hand tools. Here’s an image from I.F. Grant’s photo album (c.1940s) of some of the textile objects posing together, including our old friend, a basket!  Raw fleece was kept in wool baskets or mudags such as these, and tufts were pulled out for spinning.  It’s said that the baskets were kept next to a fire, as this would warm the wool up and soften the lanolin, which made it easier to spin. 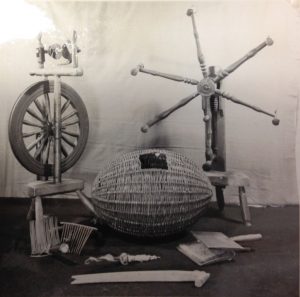 All images are courtesy of the Highland Folk Museum

Previous blog post – A few of our favourite things…..