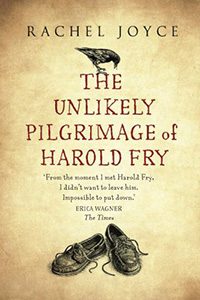 The Unlikely Pilgrimage of Harold Fry was exactly what it said on the cover – unlikely. While some people might have found his walk to Berwick from Devon to visit dying long lost friend Queenie touching, it struck most of us as utterly absurd and rather selfish, especially given that he was apparently only covering four or five miles a day at start and finish.

Or 627 miles in 87 days in all, as we’re reminded at the end, although it appeared to take longer in the reading. Again, there were parts that demanded massive suspension of disbelief, and many of us found his transmogrification into a Messianic figure rather laughable, especially when he gave away all his belongings and insisted that life on the road untrammelled by personal possessions was the way to be.

Ultimately, though, Harold unravels and undergoes a cross between classic mid-life crisis (although he’s 65) and nervous breakdown, which is where the book gets really interesting. There are many parts we could have done without, but other parts were absolutely brilliant.

The gradual peeling away of the main characters’ masks and protective outer surfaces was very subtle and touching. The you-never-know-what-you’ve-got-until-it’s-gone relationship between Harold and Maureen was very emotive and the manner in which the author uncovered the core of bereavement at the centre of their marriage was exceptional.

Also, the eventual meeting of Harold and Queenie could had been cloying and uplifting, in the worst sense, but in fact was underplayed low key and worked very well, making Queenie’s disfigurements and sufferings far more distressing, especially as she’d only been hanging on for Harold to arrive so that by all his dithering and doubting he’s actually prolonged her suffering rather than relieved her end.

The short two page death of Queenie was a masterpiece.