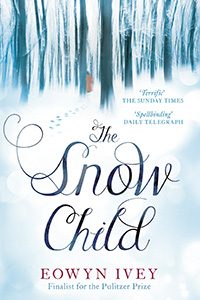 Set in 1920s Alaska; Jack & Mabel attempting the pioneering life although they’re entering their 50s. The arc of the plot wasn’t hard to guess, but the writing was so beautiful nobody minded. The implicit contradictions of the book – did they build a snow child or was she a real girl? – didn’t spoil it in anyway, and although the ending was perhaps not perfect, it wasn’t really going to end otherwise. The hunting, fishing, skinning episodes were brilliant, the relationship between Faina and Garret as touching as it was inevitable, and the introduction of Esther and her boisterous family a bit of light relief. But the true joy of this book was the way it drew you right into those characters’ lives and into the snow and bitterness of Alaska.

Could go on about it, but I’d rather just tell people who haven’t read it to go out and read it.