Instructions for a heatwave
Maggie O'Farrell 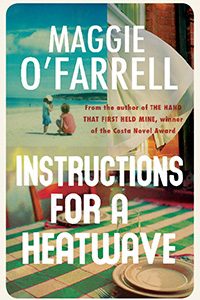 Instructions for a Heatwave was again predicated on the mystery of a missing family member – this time the husband of Gretta Riordan, which serves to bring her children back from their unhappy lives so that they can all eventually go on a jolly jaunt to Ireland and resolve all their issues. As characters, the children Monica, Michael and Aoife, were really there to serve their part, although the changing relationship between Michael and his wife was really deftly drawn, and the parts with Aoife and Gabe in New York were probably the stand-out parts of the book. Gretta is the stereotypically loud and brash Irish immigrant mother, while Robert (the husband) was more of an empty void than anything else. There were holes in the plot that were hard to overlook – like how they notice that Robert has taken his passport but don’t make the obvious assumption that he’s probably gone back to Ireland for an impromptu visit, like why they didn’t phone their numerous relatives in Ireland to ask if they’d seen him, most obviously why Robert didn’t just leave a note saying ‘I’m off for a few days, back next week.’ The whole dying brother who ran off with his first wife didn’t ring true, but of course it was only there as a plot device to explain Robert’s leaving (off to see dying brother in convent) and to make Gretta’s marriage a lie, thereby undermining her self-righteous condemnation of sinners and children a bit of a cheek.

Having said all that, her writing was wonderful in parts – and particularly when they all reached Ireland, when the language just came alive – and her descriptions of the different children’s lives and their complicated relationships were beautifully observed. Less convincing was Aoifa’s main motif – namely that she’s so dyslexic she never learned to read and write, despite going through the entire school system. What was most annoying to one and all was Aoifa – the name, rather than the character – for was it was left until very late in the book before the pronunciation was explained (almost like Eva but with a slight ‘f’ sound on the V) and had everyone spitting! No explanation either why the first two older children had such stand up English names whereas Aoifa had a complicated Irish one. Wouldn’t Naimh or Mariadh have been more likely from the rather unimaginative duo of Robert and Gretta?

A small gripe perhaps, but one that undoubtedly spoiled the enjoyments to be had in this book.