Before I go to sleep
S. J. Watson 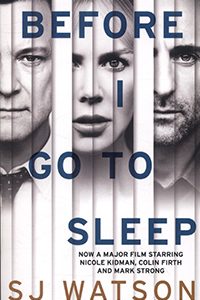 Before I go to Sleep had some interesting ideas, despite them all being pinched from the film Memento, and having absolutely no factual basis in the medical literature. But then it’s fiction! Why should it? It should, according the pedants (mostly me) because if the premise holds no credibility then neither does the plot. Also, there were a fair few problems with its internal logic, like why on earth the protagonist’s family and the police weren’t scouring the country for her after being abducted from the psychiatric ward, and how the loonie was allowed to just walk off with her without anyone vetting his ID or doing any proper hand-over or follow-upprocedures. Or why the psychiatrist wasn’t contacted at some point by either the police or other psychiatrists – her case was so unique it would have stood out a mile and she’d have been as easy to track down as a zebra in a field of sheep. But putting all that aside, if it’s possible to put aside – not to mention the slight hints of misogyny that she’d provoked the whole original abduction and murder attempt – it bowled along well enough, and was a good read as far as it went.

Borrow
<< Back to Book Reviews