In this post, launching on International Women’s Day (8th March) I’ll be looking into women’s shinty, and how it has developed over the years. Here at the museum, apart from a number of match programmes from the Women’s Cup Finals days, we don’t (yet) have any objects in the collection that specifically tell the story of women’s shinty. Read on to find out more about this lesser known history. 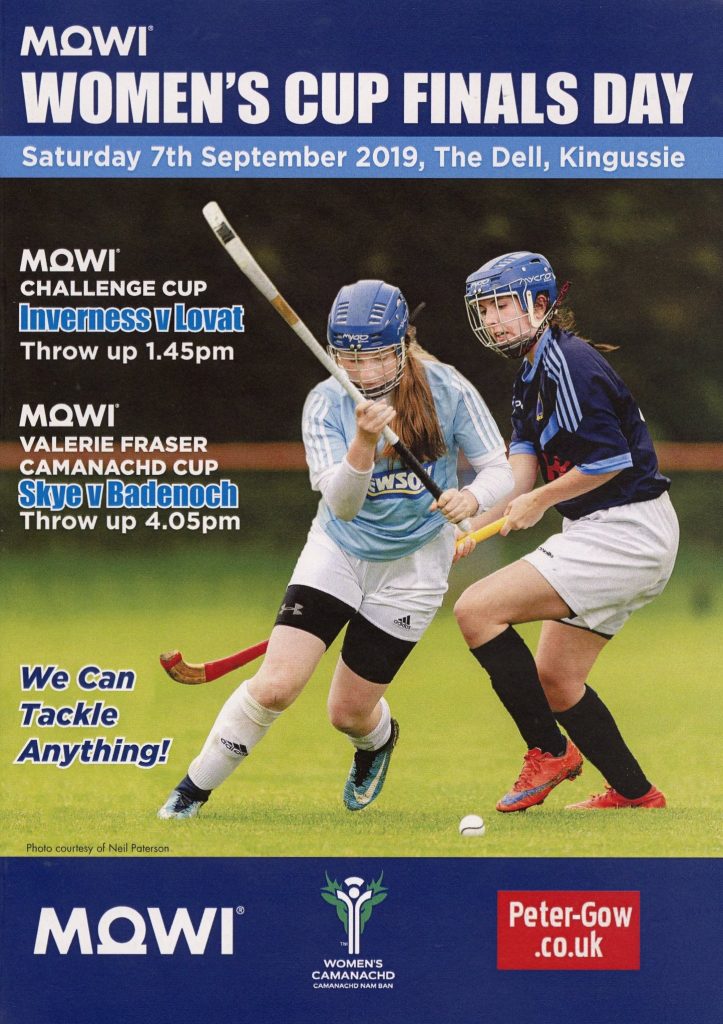 Programme for the 2019 Women’s Cup Finals Day. Skye beat Badenoch 8 goals to 6 in a thrilling match, which was also televised

Historically, shinty has been a male dominated sport. Women were often wholly involved in the sport, but more from the side-lines and home front, than on the pitch swinging a caman, or with a voice in the governance and development of the sport. 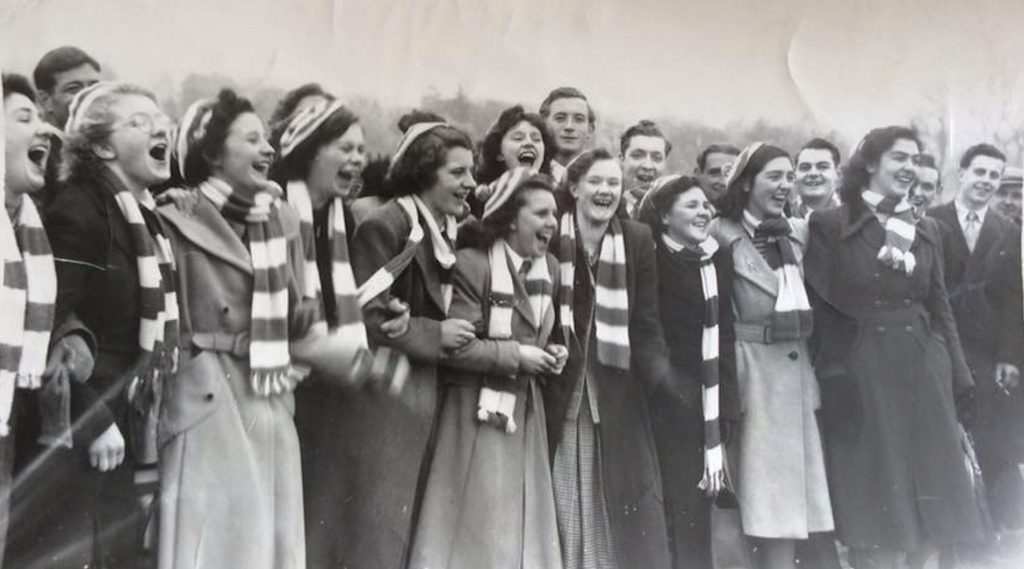 It wasn’t until the early 1990s that a more formalised “women’s shinty” came into being, with a number of dedicated women’s teams pushing it forward (notably Glengarry, Oban and Dunaad) and a small number of women starting to influence at a board level.  On the back of this progress, and with clear demand for it, the Women’s Working Group was formed, which led to the Women’s Camanachd Association (WCA) being established in 2001. (As a comparison, the men’s game has been formalised since 1893, with the establishment of the Camanachd Association).

The dedication and persistence of some key supporters such as Liz MacInnes, Sharon Fraser, Alan MacMillan, Karen Williamson (nee Cameron), Catherine Cameron, Lisa MacColl and Jane Nicol to name just a few of the passionate men and women who have supported at local and national levels, has done much to advance the women’s sport to where it is now.

And where is it now?

Women are playing and involved in shinty in a number of ways. There are: 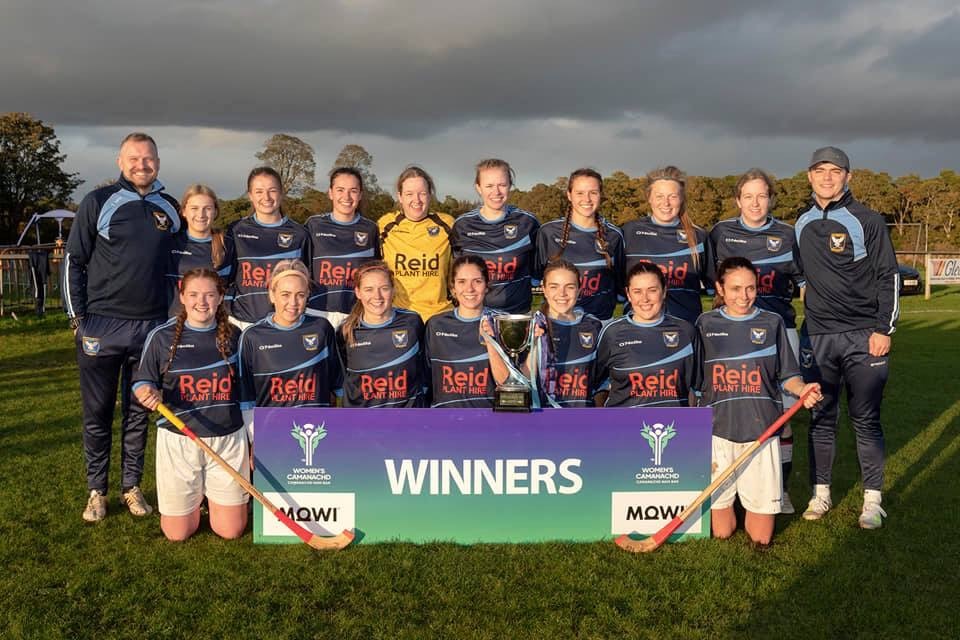 Badenoch Ladies Shinty team, winners of the National Division One League in 2019. Badenoch Ladies were formally called Badenoch and Strathspey Ladies, until the team gained enough players that it made sense for them to split and have a team for each geographical area. This is a small example of how the game is growing. Image credit: Neil Paterson

This increasing representation of women in the game at all levels is having a positive effect on the numbers joining the sport, with the number of adult female players rising from 224 in 2015, to 423 in 2018, and the number of female youth players is also increasing hugely year on year. (1)

In 2018 the Valerie Fraser Camanachd Cup final was broadcast live on BBC ALBA for the first time. The biggest annual match in women’s shinty attracts sponsorship deals and crowds of hundreds, and the televising of it has been pivotal in increasing the visibility of the women’s game.

Women have been playing shinty in a small-scale way for a number of years before it started to be more formally organised in the 1990s.

Here at a local level, in Badenoch, there was a women’s team known as the Newtonmore Bluebells. They played together in the early 1960s. 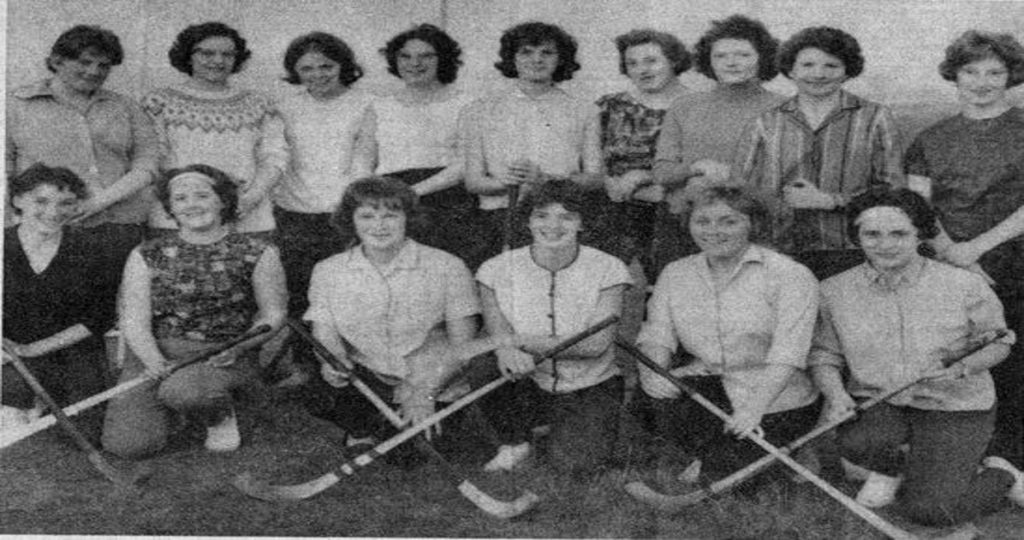 The Newtonmore Bluebells, 1964. There are four sets of sisters in this photo (George, Seller, Macdonald and Macpherson). Photograph courtesy of Hugh Dan MacLennan

I found out a bit more about the Bluebells from talking to a couple of the players.

The team got together as a fun thing to do, it was a bit of novelty rather than a serious attempt to put together a league. There was just one match per season, and it only carried on for 2 or 3 years, “at least we could always say that we were unbeaten, we stopped when we were ahead!”.

It came about as the Newtonmore ladies knew a lot of the Oban women through their husbands and partners playing shinty. They invited the Oban women over to play against them. And how did the men take all this….? “Well my gosh they were behind us to win the game. There was a great crowd there. They encouraged us to carry on the next year, probably because we’d won!”. The Bluebells played against Kyles the following year, and won again. The women’s team in Newtonmore was a short-lived outing, but much enjoyed by those who played.

Another photo of the Bluebells shows the women decked out in the Newtonmore colours, on the home ground at the Eilan. Another player I spoke to had been brought up playing shinty with her siblings at home, but not played at school as that was just for the boys, and the girls didn’t have shinty on offer. Playing with the Newtonmore Bluebells was a bit of fun, something different to do. 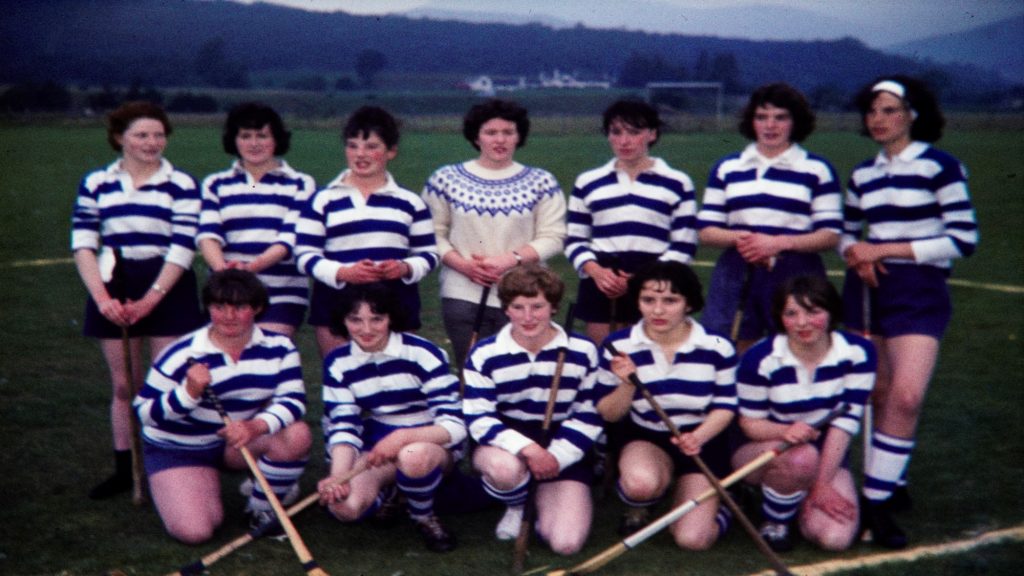 The Newtonmore Bluebells at the Eilan, c. 1964. Photograph courtesy of Hugh Dan MacLennan

When asked about the strips they were wearing “oh it wouldn’t stretch to us having our own, we borrowed the mens’!  They didn’t take us very seriously, I think they thought it was just quite entertaining and didn’t pay much attention to it all. We were better than them though!”. Although playing with the Bluebells was occasional, and carrying on with shinty wasn’t pursued in a formal way, the sport had always been a part of her life and remained so, in much the same way it was for a lot of the shinty heartland residents.

In the early to mid-60s, the general attitude was that it wasn’t a game for women – it was encouraged and supported as an occasional event, but certainly wasn’t an accepted view that a woman’s place was on the pitch. Most of the players had young families that kept them very busy, and their role in shinty was more about supporting the club and fundraising to keep things going for the men’s game. 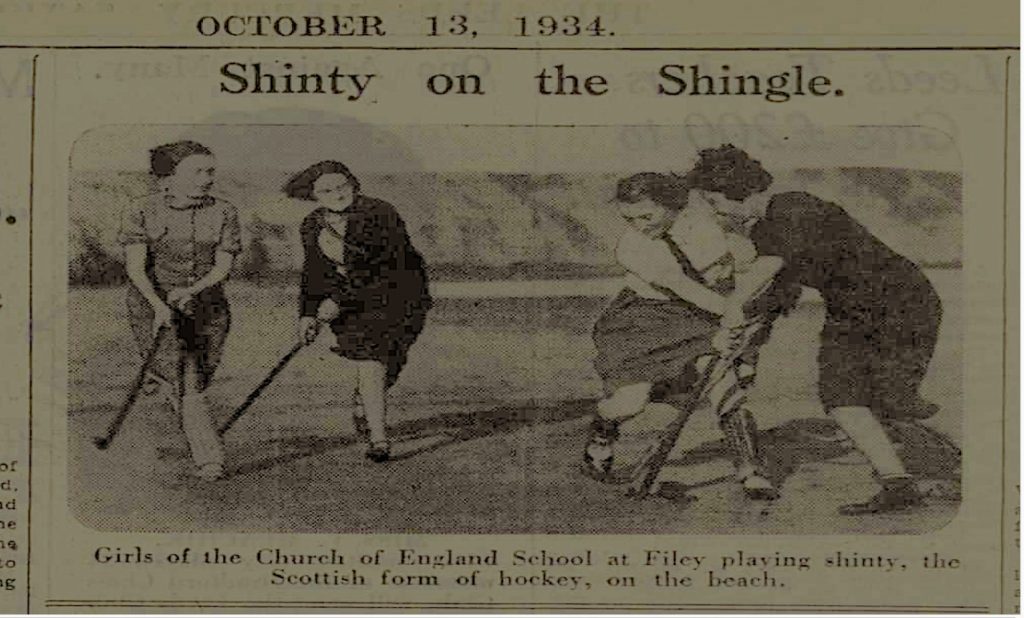 Novelty south of the border too. Perhaps the girls at this North Yorkshire school had a Scottish teacher? (2)

By the late 1970s, there was obviously a bit more of a women’s shinty scene. The 1977/78 Shinty Yearbook mentions games being played by Strathmore, Tayforth, and Perth/Kilgraston ladies’ teams and no doubt there were more going on. Being taken seriously in the macho (and sometimes chauvinistic) world of shinty in the 70s, was obviously still one of the biggest obstacles facing the women:

“While shinty for ladies may sound sacrilegious to some, it is catching on, and Dundee staged a 12-a side game between Strathmore and Perth/Kilgraston….Newtonmore ladies who watched at Dundee have offered to play in the event this season and there is the “threat” of an offer of a team from Kyles as well. Many girls feel restricted with hockey, and if their involvement in shinty is not treated as a joke, then both they, and the game, must benefit”. (3)

The women’s game is now a mainstream part of the shinty world.

One player who has made a mark on the modern game is Kirsty Deans. Kirsty is the current captain of the very successful Badenoch Ladies team, has captained the national women’s shinty team, also plays football for Inverness Caledonian Thistle, is a P.E. teacher at a Morayshire high school, and in 2020 was appointed to the Camanachd Association Board of Directors. She was awarded the Press and Journal’s inaugural Sports Personality of the Year in 2018. In addition, Kirsty is also a top scoring shinty player – in 2019, her 68 goals put her at the top of the scoreboard across both the men’s and women’s competitions! (4) 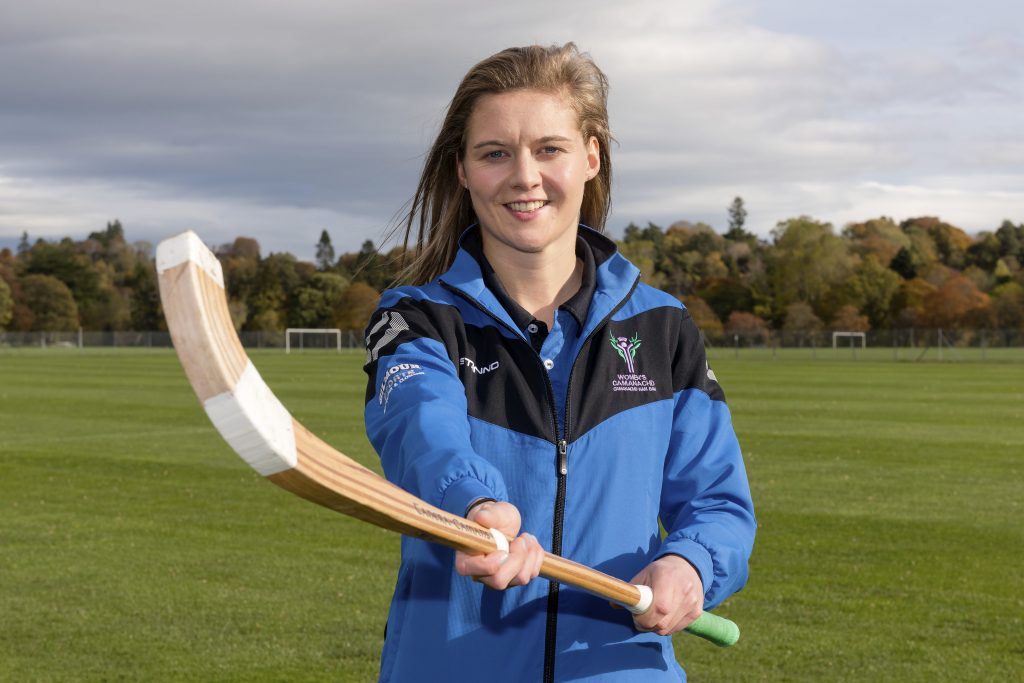 I chatted to Kirsty to find out a bit more about where the women’s game stands now.

Kirsty was a relative latecomer to shinty, as she doesn’t have family ties to the game, and it wasn’t on offer (to boys or girls) when she was at school.  She only got into the sport in Year 6.  When Kirsty started playing competitively, there were only four women’s clubs in the top league (there had been more teams playing in previous years, but there had been a marked dip that year). Now, there are enough teams to require three senior divisions and three development leagues. Kirsty stresses that these development games, usually 6-a-side, are vitally important in giving the players the game time and experience to progress upwards. Both school shinty and development teams open the game up to new players, and are a crucial part of securing a future generation of players. There is now a clear pathway of progression from lower leagues up to the higher tiers, which gives the younger girls and less experienced players something to aim for.

“The women’s game has grown hugely in the past few years in terms of the figures playing, joining, and watching the sport, and also in support received from the wider shinty community. The drive for greater equality in all areas of life and work has given a boost to the female game, as it has become so much more visible and firmly on the agenda in its own right, rather than as a side-event to the men’s game.”

Kirsty sees the televising of the Valerie Fraser Camanachd Cup final in 2018 as a turning point in women’s shinty. Giving the women’s game this coverage has opened it up to a much larger audience, and also gives it the kudos it deserves. In 2018 the Women’s International was played on the main pitch at the Bught for the first time, and it also received some all-important TV coverage.

The Women’s Camanachd Association is a separate body to the Camanachd Association. Unlike the CA, the WCA is run on an entirely voluntary basis by passionate supporters, many of them players or former players. There are close links between the two organisations, with one member – Lyndsay Bradley – sitting on both boards which helps the two to work together.  The WCA is still much smaller than the CA, but only in size, not in ambition. 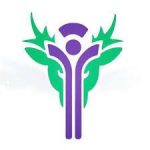 The museum won’t be without an object to represent women’s shinty for much longer. Thanks to Kirsty Deans, Lisa MacColl, and all at the Women’s Camanachd Association, we will soon be receiving an international jersey and WCA branded ball for the collection. It’s an important and much appreciated donation to mark the significance of the women’s sport, and we look forward to holding it in the collection and continuing to share the story.