The Camanachd Cup final is the pinnacle of the shinty season, that coveted trophy that every team aims to take home, or indeed retain at home. The final was due to be played at The Dell in Kingussie on 19th September of this year, but as we all know, 2020 didn’t quite pan out as expected and all shinty was postponed for the season. It was confirmed earlier this year that The Dell will be hosting the cup in 2021 instead, which will be the 125th anniversary of the Camanachd Cup.

In the run up to when the final would have been coming back to Badenoch for the first time since 1999, it seems an appropriate time to look at the objects in the Highland Folk Museum collection that are connected to the “Scottish Cup”. 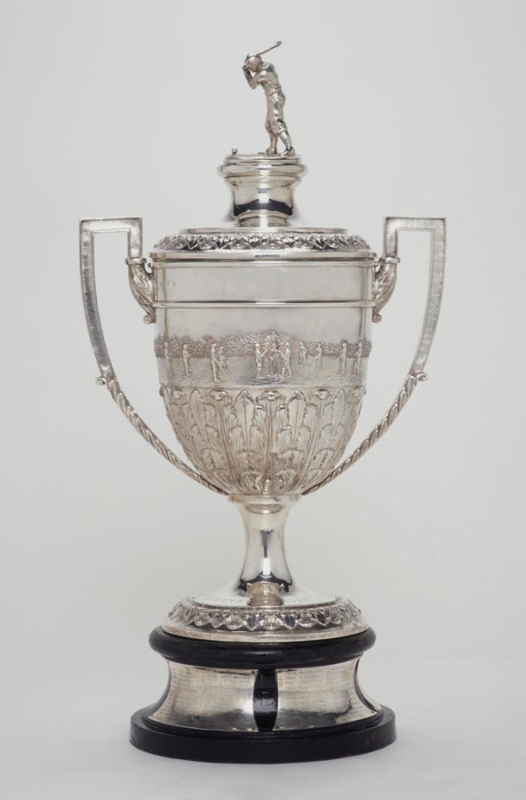 The freshly formed Camanachd Association, constituted in 1893, had early on “decided to provide a trophy to be competed for by the various Clubs within the Association”. As travel in those pre-A9 days was a lengthy and expensive commitment, and it could easily take days to make a return journey to the opposing side, the Association had decided that the best way to arrange the competition was for it to be split into four districts, to help the competing teams to keep costs down. The leaders in each district would then play each other in the final rounds. The districts and teams for the first competition were:

The rounds were held and teams progressively knocked out, and the first cup final was played on April 25th, 1896 (shinty has only in recent decades become a summer sport – prior to this it was always played throughout the winter months). In the inaugural final, Kingussie beat Glasgow Cowal by 2 goals to nil. The match, held in Inverness, was attended by 1000 spectators, many of whom had travelled on the extra trains that had been laid on for the match by the Highland Railway Company (2).

“The news of the victory of the home team was received with much satisfaction in Kingussie and district, and the players were accorded an ovation on their return, pipers playing lively airs, and others carrying lighted torches, assembling at the station, and marching through the town, while bonfires were lighted above the burgh and two on the farm of Dunachton”. (3)

Although an important shinty team in the early days of the sport, Glasgow Cowal never made it to another Camanachd Cup final, and the club folded in the 1930s. 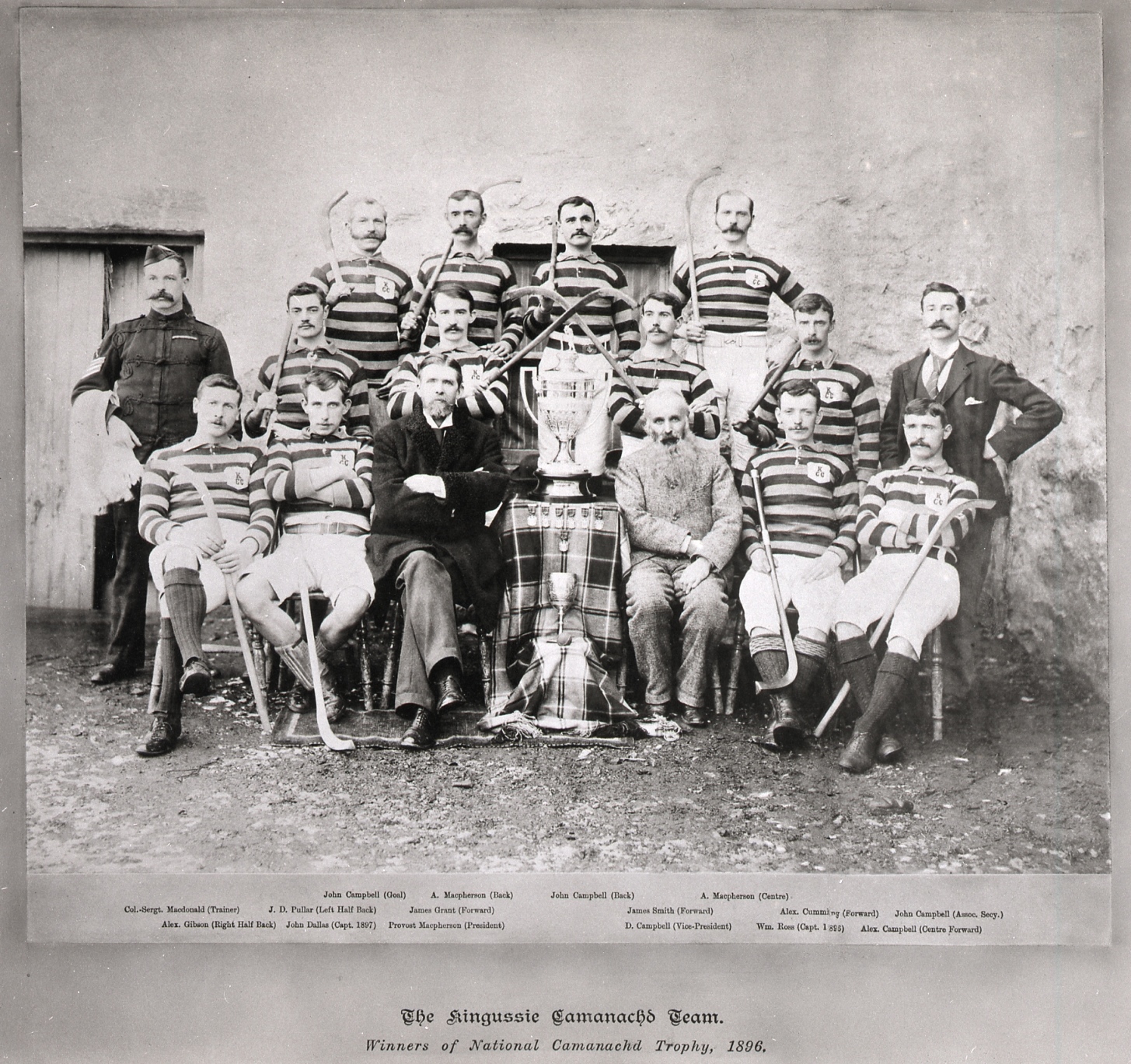 Kingussie team, winners of the first Camanachd Cup, 1896. The trophy was still being made in Edinburgh on the day of the final, so the team weren’t presented with it until November of that year (4). Image credit: High Life Highland, Highland Folk Museum

The cup itself – officially the Camanachd Association Challenge Trophy, but also known as the Scottish Cup- was designed and made by Hamilton and Inches of Edinburgh, and the original is still used to this day. The cup has been used as a cup – tradition dictates that it is filled with whisky and passed around the victorious team and supporters – so the fact that it is still in one piece (or more accurately two pieces, including the lid) is testament to the quality of the original silversmithing. The cost of creating a replica was investigated but in the end deemed too expensive. Hamilton and Inches have carried out maintenance work on the cup (5) but it is still the same cup today as was presented back in 1896. The trophy is treated carefully to ensure its survival for future generations, although there was an infamous case of it ending up in Portree police station after Skye Camanachd won the competition in 1990 and briefly mislaid it in the course of the celebrations…

The distinctive figure on the top of the cup is modelled on John G. Dallas, a Kingussie player who was in the winning team in the first cup final in 1896, and then went on to win it three more times. John, otherwise known as Jock, went on to hold the title of provost and president of the Camanachd Association and stayed involved in shinty up until his death in 1956, aged 82 (6). Subsequent generations of Dallas’s have kept the shinty tradition going, including John’s great-grandson Ally Dallas of Kingussie who holds the record for the most Camanachd Cup wins, claiming the prize a highly impressive 15 times. For many years, Newtonmore goalkeeper Hughie Chisholm and player David “Tarzan” Ritchie shared the record with their 12 wins each. 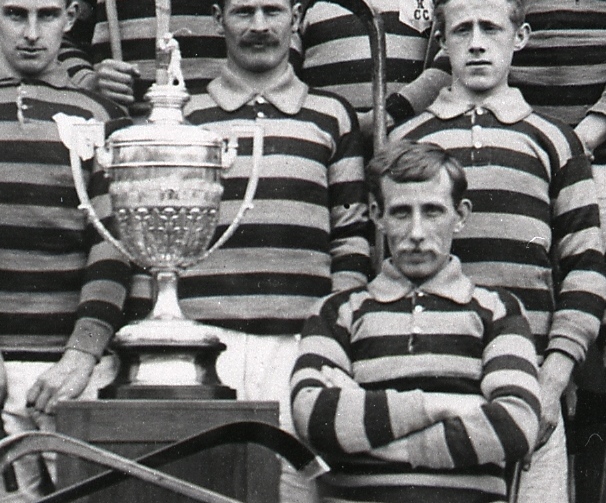 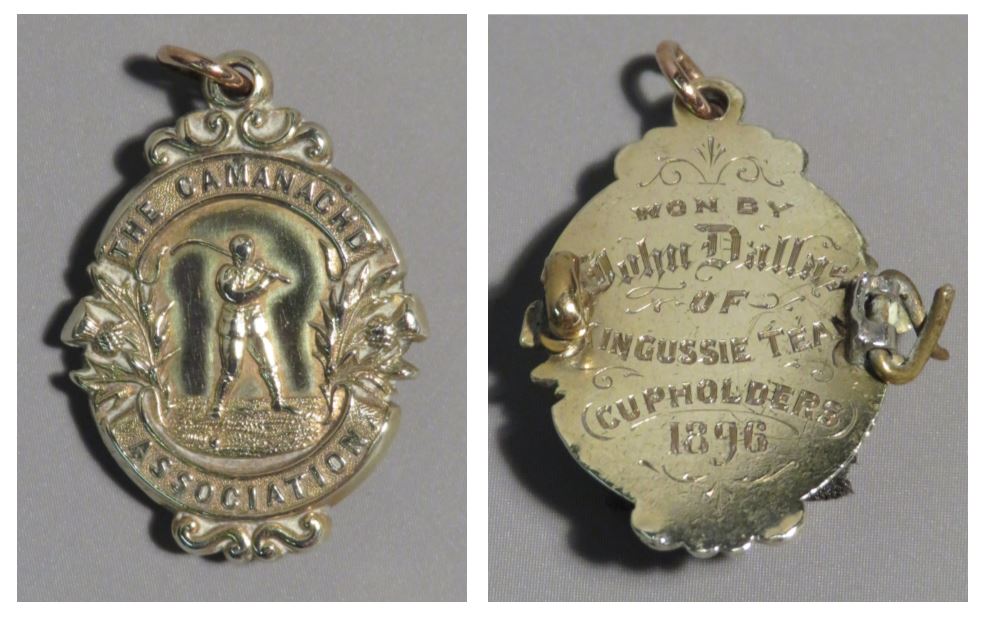 We also have in the collection a Runners-Up medal from 1928, donated to the museum when Boleskine Shinty Pavilion was constructed here on site in 2013. Hallmarks show the silver medal was made by J. W. Tiptaft & Son Ltd, Birmingham in 1928. The newly amalgamated team of Boleskine reached the final of the cup in their first season, but were beaten 6-2 by Kyles Athletic. They haven’t – as yet – reached another Camanachd Cup final but with a promising junior team there is hope for the future. 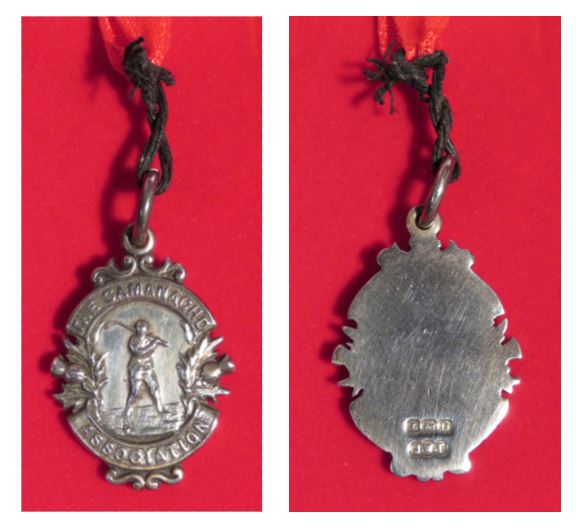 The tradition of the silver mounted caman being presented to the winning captain started at the first cup final in 1896, as suggested and offered by Duncan Macpherson, Gun and Fishing Tackle Maker of Inverness.  This later became Macpherson’s Sporting Stores, and Duncan’s nephew John Macpherson continued the tradition. William MacGillivray’s silver mounted caman, which was presented to him as captain of Kingussie, the winning team of the 1914 Camanachd Cup. Tragically, MacGillivray was killed in action in WWI just months later. Image credit: High Life Highland, Highland Folk Museum

The cup itself is a draw, both for the memories it holds for players, veterans, rivals and supporters, and also for admirers of a beautifully crafted object. In September 2019, the cup was kindly brought along by current champs Newtonmore, to a Badenoch Shinty Memories gathering held at the Laggan Village Hall. Everyone loved seeing the cup, even though there was no whisky being served from it that day. 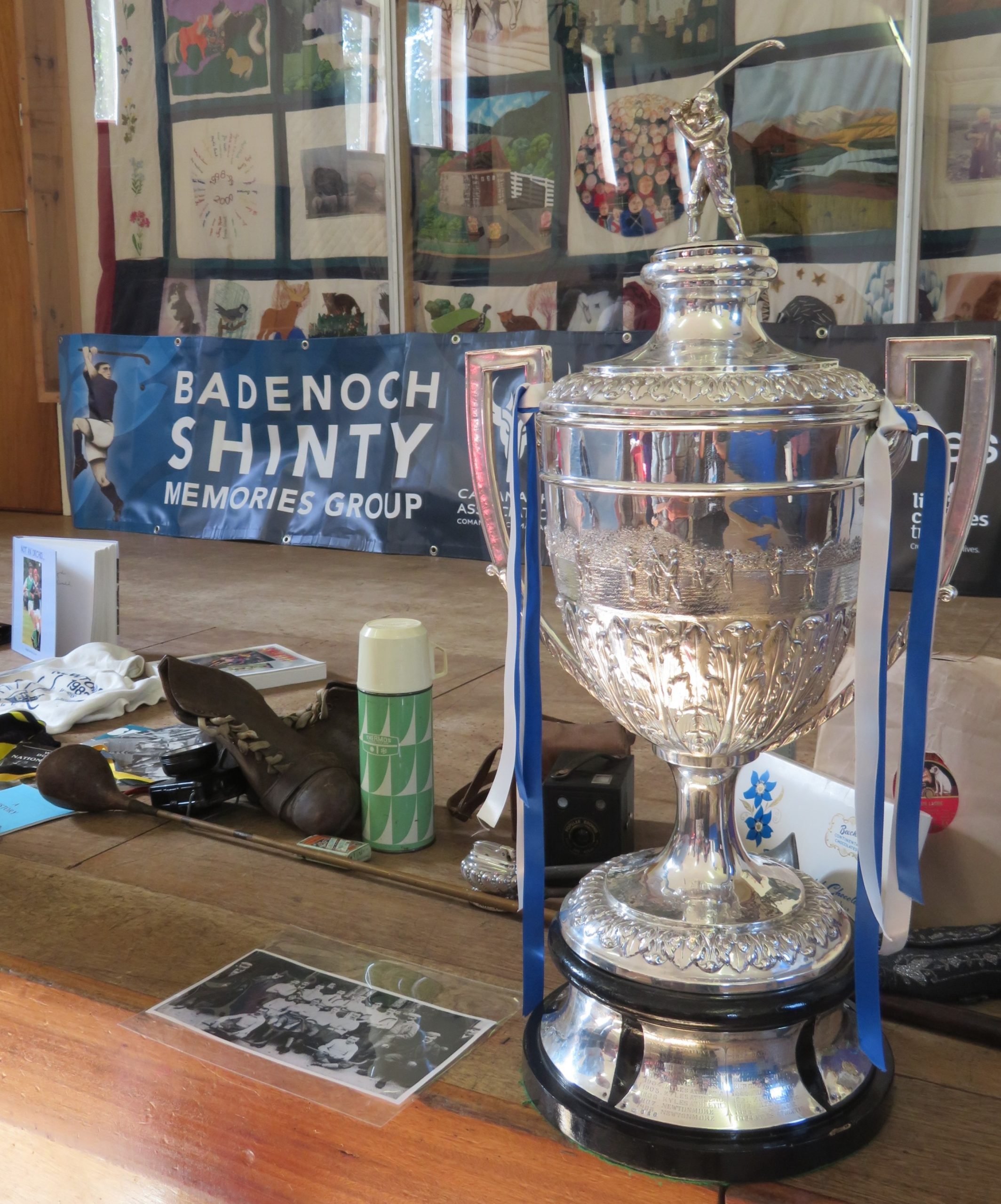 Aside from the medals, the museum holds a number of other objects and 2D items that relate to the Camanachd Cup. There aren’t many balls in the collection where we know exactly which match they were played in, but we do know that this one was used in the 1914 Camanachd Cup final. Kingussie beat Kyles Athletic 6-1 in Glasgow in 1914, the last time the Camanachd Cup was played until 1920 due to the outbreak of World War I. The ball was donated to the museum in 1957 by Miss Dallas of Kingussie. The museum holds in its archive many programmes from previous cup finals. The earliest we have, kindly donated by Dr Orchard’s family, is from the 1964 cup final between Inveraray and Kilmallie, which was held in Fort William. Kilmallie beat Inveraray 4-1. 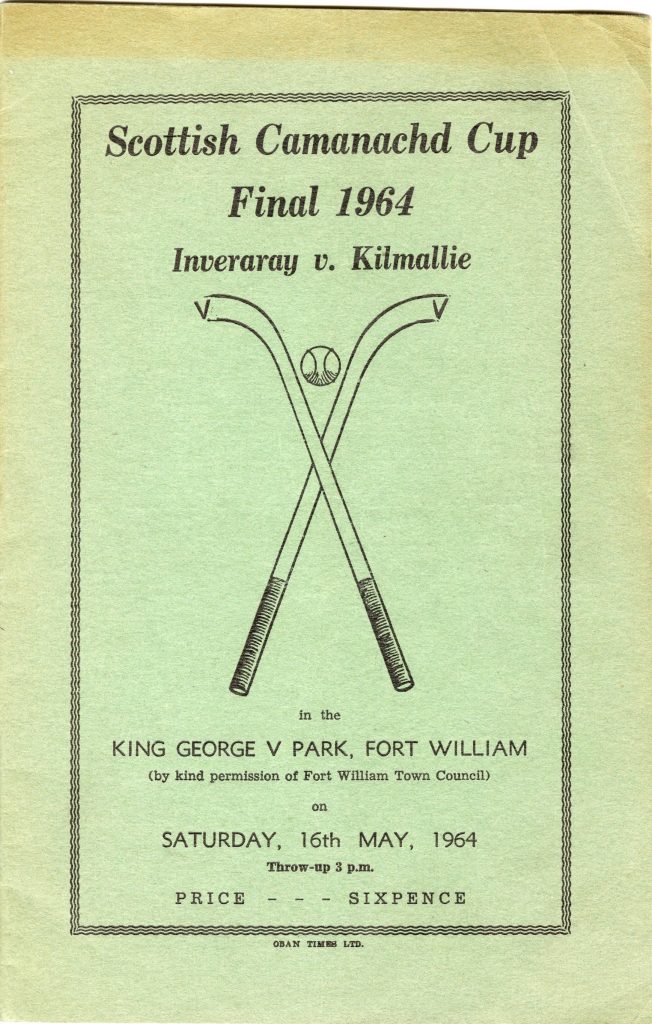 We also have a number of posters from finals, such as the one below from the 1980 final held at The Dell (Kyles Athletic beat Newtonmore 6-5). That year, during the weekend of the cup final, there was an exhibition held in the Tourist Office in Kingussie about shinty history. “Over my Shoulder” featured objects, photographs and articles, and had been organised by Jack Richmond who was the Secretary for the Camanachd Association at the time.

If you have any original posters for cup finals, or any programmes from matches (especially early ones) that you’d been keen to donate to the museum collection, don’t hesitate to get in touch at [email protected]. Adding to the collection and archive helps to preserve the story of shinty from its early days up to the current time, and any duplicates are used in the Badenoch Shinty Memory boxes to spark memories and conversations with shinty fans and supporters who might be living with dementia, are isolated or lonely, or just interested in a trip down memory lane. Newtonmore Camanachd Club hold the formidable record for the highest number of Camanachd Cup victories, at an impressive 34 wins.  Although they had reached the final in both 1905 and 1906, they didn’t achieve their first win until 1907, when they beat Kyles Athletic 7-2, in Kingussie. This started off a winning streak, and they retained the title of Scottish Champions for the next 3 years. The great Johnnie Cattanach was one of the star players in this era, and the only shinty player who has been inducted into the Scottish Sports Hall of Fame, posthumously, in 2002. Cattanach famously scored 8 goals in the 11-3 final score match against Furnace in 1909. This record still stands today. (7) 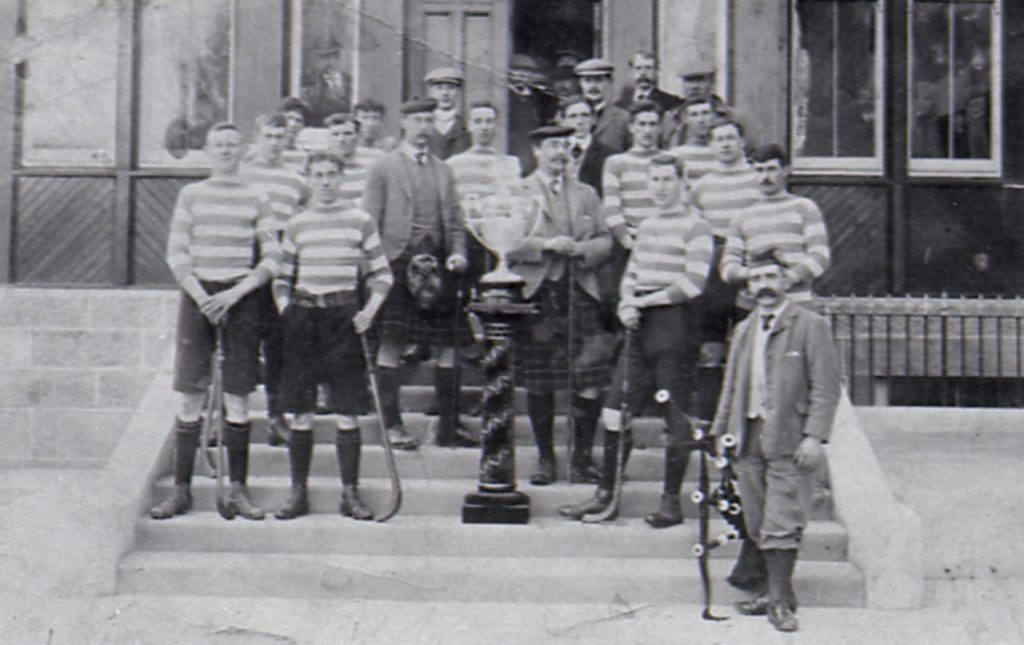 Newtonmore with their first Camanachd Cup win in 1907 on the steps of the Duke of Gordon Hotel, Kingussie. Johnnie Cattanach is second from the right on the third step back. Image credit: High Life Highland, Highland Folk Museum

1911 was an unhappier year for Newtonmore. The team had beaten Ballachulish 3-2 in the final in Inverness, but the third goal had been contested by Ballachulish. A dispute ensued over the interpretation of the rules, and the final was ordered to be replayed 3 weeks later in Lochaber. Newtonmore lost this replay 3-1, not helped by their goalkeeper being sent off mid-way through the game, and their captain being out of action. They lost again to Ballachulish the following year, and although they were successful in many other major competitions, they didn’t win the Camanachd Cup again until 1929, when their fortunes then changed for the better. (8)

Newtonmore went on to win the Camanachd Cup at least once in every decade from 1930s onwards, usually numerous times. In the 1970s they really became a force to be reckoned with and held the Camanachd Cup title seven times that decade. In the 1980s they played in 8 of the 10 finals, and won 4 of them. Into the 1990s and the start of the 21st century, Newtonmore became less of a dominant force, and historic rivals Kingussie took more Camanachd Cup wins, although still couldn’t touch the overall tally held by Newtonmore. The blue and white striped team are in recent years having a revival of their winning streak, beating Kingussie 4-3 in Inverness in 2011, and then going on to take the cup home again in 2013, and in a run of four years from 2016-19.

The cup final was rained off last year in Fort William at 0-0 for the first time in its history, and rescheduled for the following week. Newtonmore beat Oban Camanachd 5-1, to take their 34th Camanachd Cup win. The start of the 2019 cup final in Fort William. The game was called off due to heavy rain. Image credit: Helen Pickles There’s no doubt that the Camanachd Cup is the most sought after of all the shinty Grand Slam trophies. Between them, Newtonmore and Kingussie have won the cup 57 times in its history; 14 other teams have won it the other 55 times. There have been three periods of time that the cup hasn’t been held – during the two world wars, and this year, because of Covid restrictions. No doubt that when the cup returns to be fought for at The Dell in 2021, whichever teams are vying for it, it’ll be quite some celebration.

National Sporting Heritage Day is held on 30th September every year to recognise and celebrate Sporting Heritage. It aims to raise awareness of the amazing sporting collections and communities of sport in the UK.

There are many special places all over the UK which protect and care for sporting treasures. These places are National Collections of Sport. As part of National Sporting Heritage Day we have set you a challenge!

13 Sporting Heritage organisations have come together to hide answers on our treasure map. Can you solve our treasure hunt and unscramble the anagram to unlock the secret words? Click here to start hunting!