Time flies, and Helen and I have now moved on to working with our fifth and final area of the collection, the treen. Thought to have derived from the phrase ‘of a tree’, treen are small wooden household items which are smaller than a spinning wheel and have a functional rather than decorative purpose (1). Although this description could cover a lot of the objects we have within Am Fasgadh we have focused on several specific types of objects:

Quaichs, taken from the gaelic cuachs, are small drinking vessels often with two handles, or lugs, at the rim. Some larger quaichs have 4 lugs, and these are said to have been used during festive occasions such as weddings, the numerous handles allowing them to be passed from hand to hand. Given that a quaich has a larger surface area than a glass it is thought that the aroma of whisky can be more easily savoured in them (2), and some within our collection have inscriptions relating to downing your drink such as the gaelic sguab asi, which translates to “sweep it away”. One quaich is also thought to be a token of love, and a small metal disc within the centre inscribed with the initials IF, as well as pog mi mo ghoadas do which translates to “kiss me if you can”. 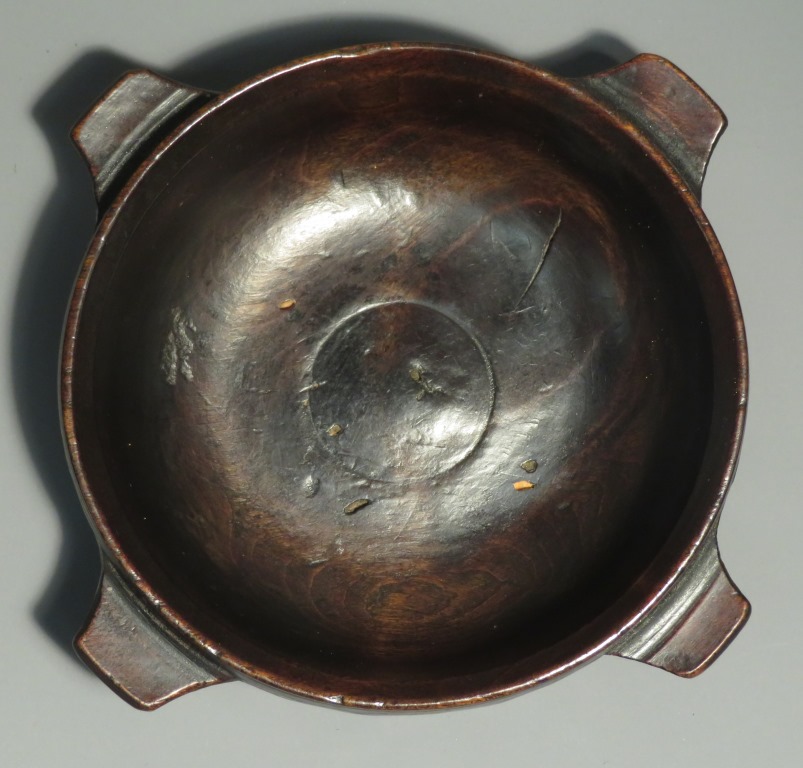 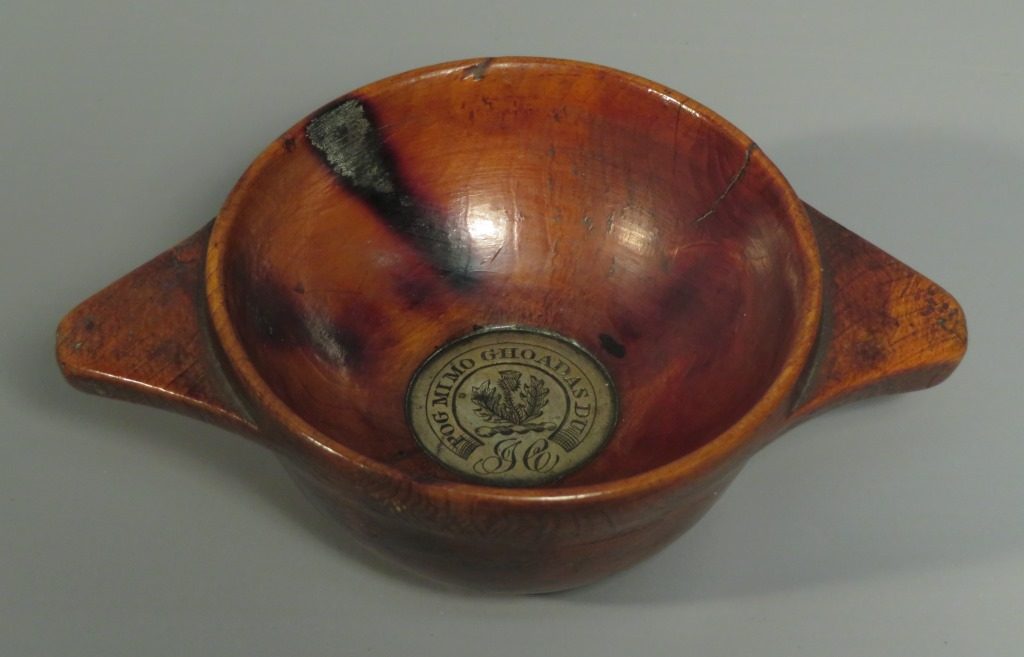 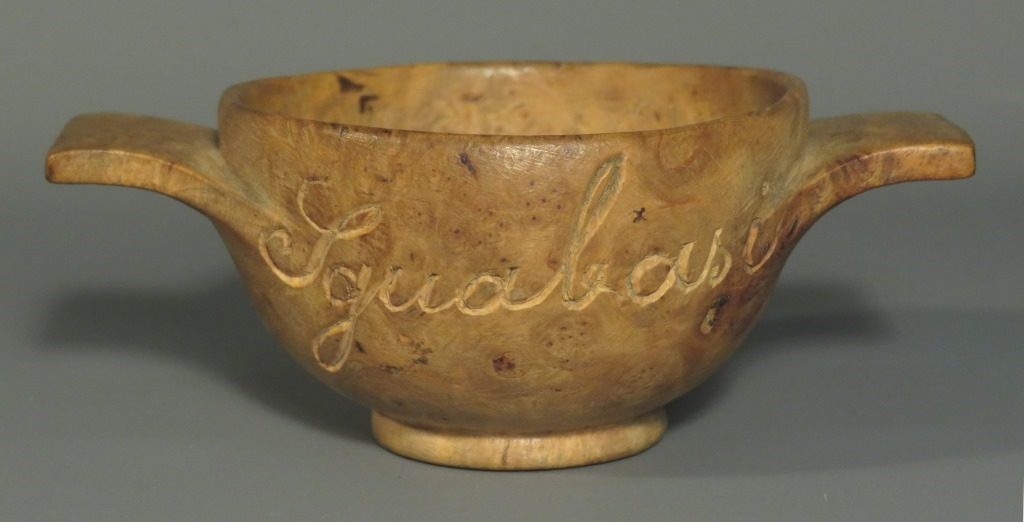 Some of the most decorative items we have within the treen collection are the staved vessels, which are constructed in a similar way to barrels with alternating staves of dark and light wood. What makes these stand out is that the staves are often ‘feathered’ together to make the vessels watertight, a skill that I.F. Grant attributes to the Travellers or skilled coopers (3). But this is not the only intricate craft involved in making them, as the hoops that run around the vessels are made of woody plant fibre stems, cut in an interconnecting spliced join that requires no glue or nails 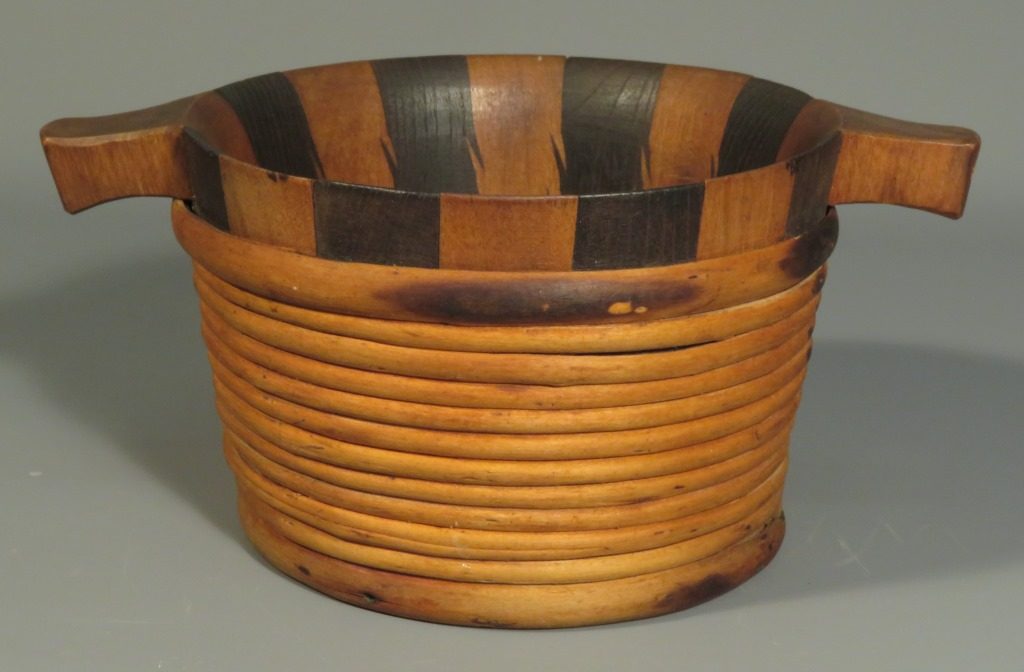 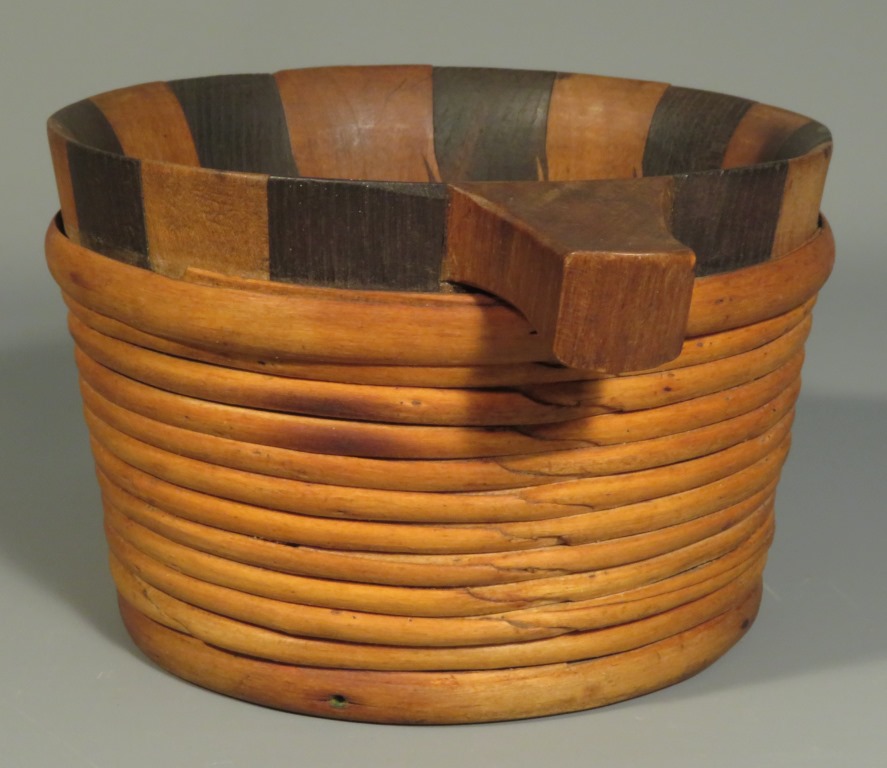 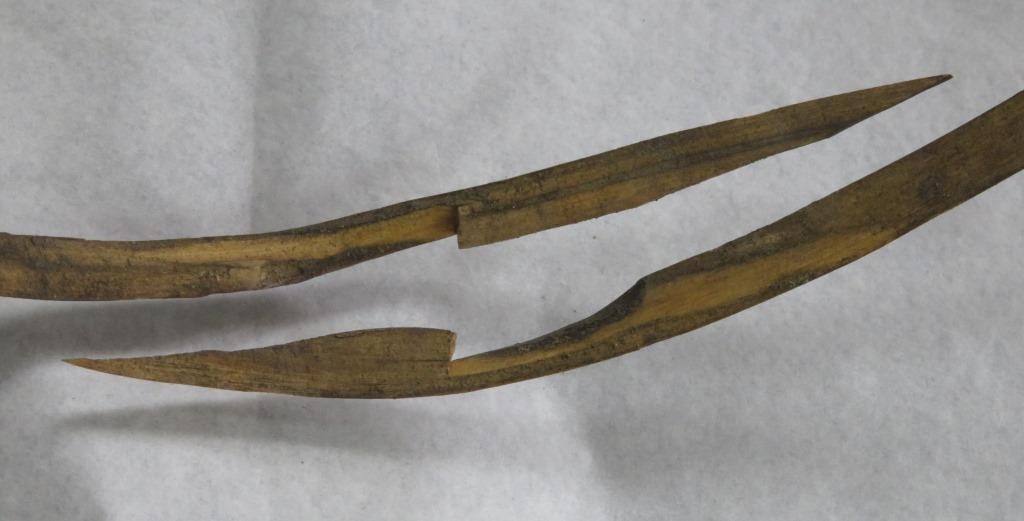 Above, bicker SJ.0042, and below, the feathered joins and the interconnecting spliced hoops

Of these staved vessels it is the bickers that are most similar to quaichs in that two of the staves extend outwards to create handles. A lovely bicker within our collection has a lock of hair secured between two glass bottoms and although we don’t know who it belonged to, I.F. Grant suggests it was so that the owner could drink to his lady-love (3). Luggies are differentiated by a handle formed by one of the staves extending above the rim. Although large and less decorative versions of these could have been used for a variety of purposes such as within the dairy, the smaller feathered versions are thought to have been used for both food and drinks, including ale and porridge. It is not unusual for luggies to have a dried pea caught within two wooden bottom panels, which could be rattled when it was time for a top up. As difficult as it has been for us to know when a quaich is actually a bicker and a bicker a quaich, it was even harder to know when a plate becomes a bowl, and a bowl becomes a platter, and a platter becomes a dish! These wooden vessels would have been common within Highland households as wood was generally cheaper and more easily available than ceramic, and many of our bowls are engraved with dates and initials, the oldest of which dates the bowl back at least to 1731. 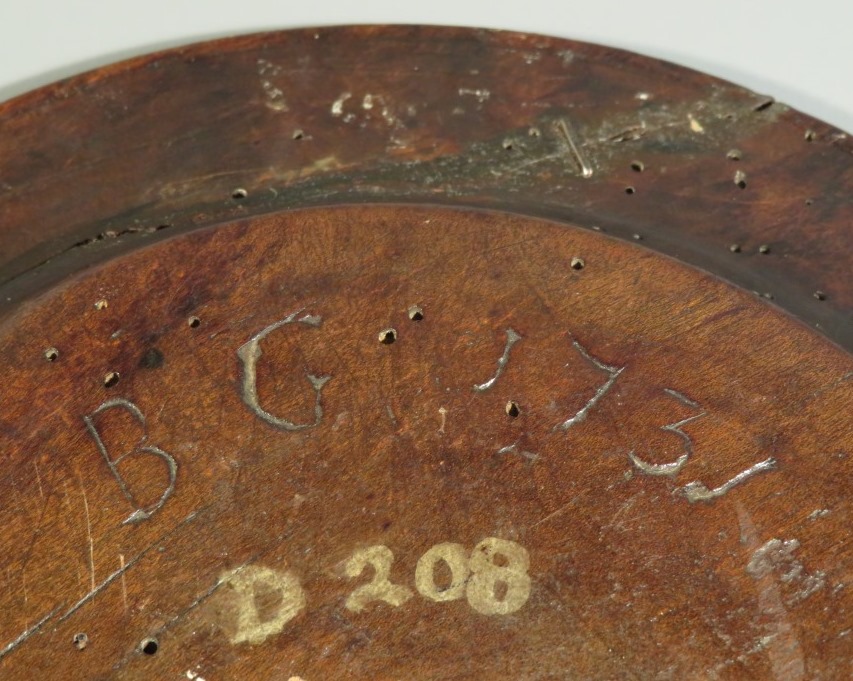 These dishes would have been used to eat a variety of meals from, and one of our bowls was donated along with a horn spoon by a man from Aberdeen, whose father is said to have eaten his brose from it, a dish made of oatmeal. Like the bowls and plates, wooden ladles would have been very common within Highland households and used for a variety of purposes including ladling food and drink. Almost all of the ladles within our collection have a hook at the top of the handle, either for hanging on a kitchen dresser or for hooking over larger containers to prevent the ladle from slipping in to the contents. Although most of the ladles within our collection are functional rather than decorative, we have a pair that are carved in to the shape of boots with stockings, as well as one made from half of a coconut shell. The final area of treen that we’re covering is the ‘miscellaneous’ objects, which is all of the objects that you would put other things into. Included within this are the spoons boxes which would have hung on the wall or on the side of furniture and stored horn spoons. Several of the boxes within our collection are intricately decorated with hearts or circular patterns, and one also has a small drawer at the bottom which may have been used to store candles and matches (2). Other interesting items are salt boxes, some of which have similar dark and light staves as the bickers and luggies, and which would have been kept close to the fire to keep the salt dry. Given that salt was highly taxed and expensive these boxes wouldn’t have been found in every home, but salt was known to be an important ingredient to both flavour and preserve food. One of the more rare items within the collection is a knife board, which is a box with an extended back board. As metal cutlery was prone to rust these boxes would have been filled with an abrasive material such as brick dust or pumice powder into which would be dipped a wet knife. This would have then been ‘stropped’ on the long surface, which would have been covered in a course canvas material. Knife boards would have been uncommon in Scotland because until recently horn spoons were more usual than metal cutlery.

Keep an eye out for our next blog post, where I’ll be discussing the different types of repair found on the treen items as well as how we now repair objects to conservation standards.