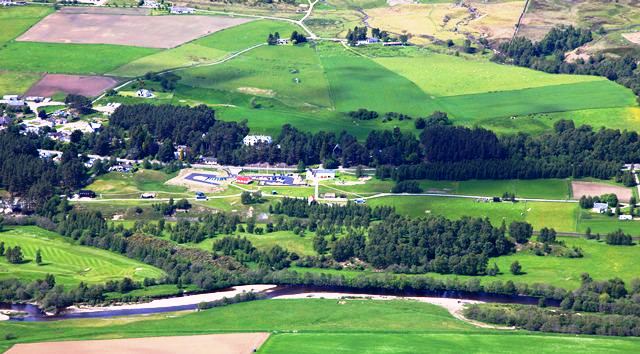 The Highland Folk Museum sits at the east edge of the village of Newtonmore less than two miles from the town of Kingussie in the historic region of Badenoch. It lies just off the A9 at the west side of the Cairngorms National Park

Newtonmore is a lovely little village which was formed from early 19th Century onwards. It is not a ‘planned’ town but grew organically as more and more people moved there away from their smaller ‘Townships’ . In fact an early reference to the Town gives the name Newtown-more (the new town on the moor). http://www.newtonmore.com

Kingussie was one of several model villages/towns built at the turn of the 19th Century. In the 1867 the village became a Police Burgh, thus creating the only town in Badenoch. Prior to the 18th Century the land which is now Kingussie lay at the head of an immense pine forest, hence the name Kingussie (pronounced King-you-sea derived from the Gaelic Ceann á Ghuibhsaich which means the head of the pine wood). http://www.kingussie.co.uk/

Cairngorm National Park (Scottish Gaelic Pàirc Nàiseanta a’ Mhonaidh Ruaidh) is one of only two National Parks in Scotland (the other being Loch Lomond and the Trossachs). The park boundary covers some of the most stunning scenery in Europe including the magnificent Cairngorm Mountains. It is home to Scotland’s number one ski centre and is a magnet for outdoor enthusiasts with plenty of scope for mountain biking, climbing, walking, water-sports and a host of other activities.  http://www.visitcairngorms.com

Badenoch The Storylands – Badenoch is a historic region of the Cairngorms National Park at the heart of the Scottish Highlands. Here you will find everything from ancient fortresses and distilleries to some of the UK best attractions and museums, including us! Experience real highland culture and wildlife. Explore stories and hidden gems in this special place. With wildlife watching, traditional sports and culture, as well as great walks and cycling routes, there is something for everyone. Check out the website to find out more and download the app at https://badenochstorylands.com/