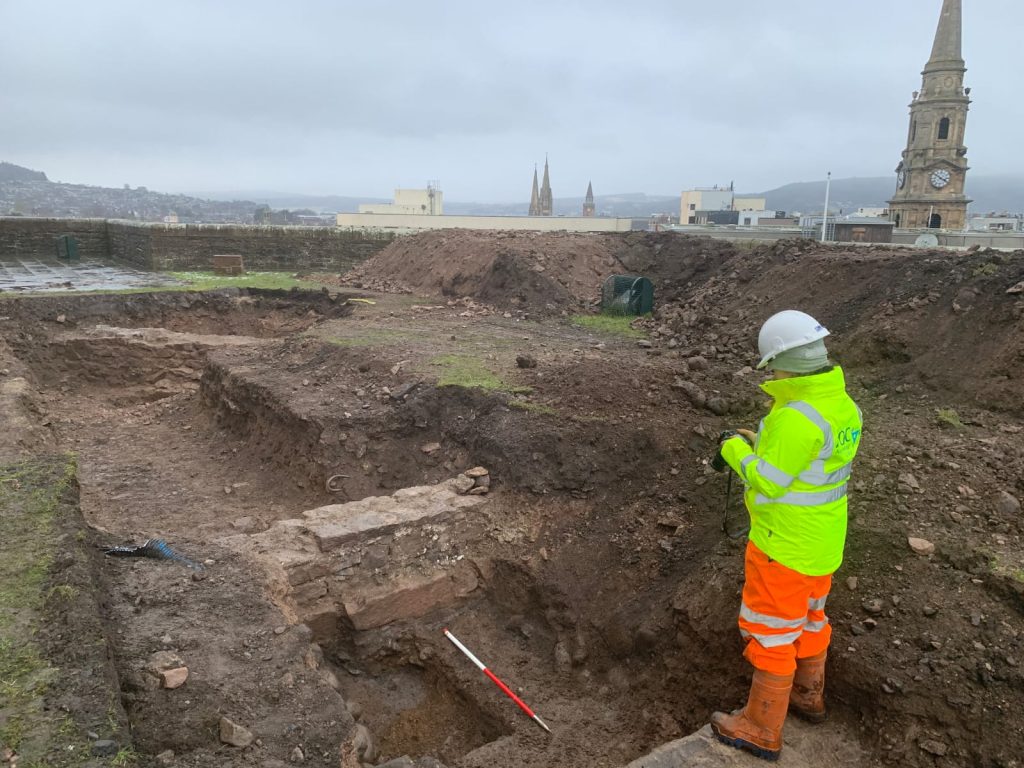 On behalf of The Highland Council, High Life Highland this week released a video showing original features uncovered during the initial stages of transforming Inverness Castle to create a gateway for Highland tourism. New images of archaeological finds from the works have also been released.

In the new video released today, Stuart MacKellar of LDN Architects takes us on a tour of the highlights of work undertaken during the initial (enabling) contract completed earlier this year, including:

The video also shows Karen Dundas of Scottish Wall Painting Conservators detailing the work that has gone on to peel back the layers of paint in the building to reveal more information about how some areas had been decorated at the time of its construction over 180 years ago. This included finely painted colour schemes in the grand entrance lobby and principal court room.

Images of small artefacts – 19th century pottery, iron objects, and clay pipe fragments including a beautiful (possibly 18th century) clay pipe bowl – found by archaeologists on the site have also been released. The archaeological investigations were carried out earlier this year as part of the initial works to transform the castle, and experts examined the area for historical evidence hidden below the surface that would tell us about the site’s past life.

The most striking of the artefacts found was a decorated clay pipe bowl showing the Prince of Wales’s feathers and floral motifs that include a thistle, which dates to the 18th or 19th century. Former footings of the prison’s airing shelters for exercising were also found in the north courtyard.

As well as the historic finds, the archaeologists uncovered a red-brick vehicle inspection pit for the old Police garage beneath the recently demolished modern cell-block.

The well on the site, which is medieval in origin but had been restored in the early 1900s, was also cleared out and the contents inspected. Some 20th century coins, mostly pennies and two pence pieces, were recovered, along with lots of plastic and other rubbish.

The transformation of Inverness Castle is supported by £15 million Scottish Government and £3 million UK Government investment through the Inverness and Highland City Region Deal. It will create a gateway for Highland tourism, contributing to reinvigoration of tourism across the area and providing much needed investment for the industry to aid the recovery from the effects of the Covid-19 pandemic. The project will support economic growth throughout the Highland area, creating a sustainable, viable and “must-see” attraction that will celebrate the spirit of the Highlands.