In Italy Allied forces continued to attack the German Winter Line, but deteriorating weather and stubborn resistance was resulting in slow progress and heavy casualties. On 14 December Soviet forces launched a new winter offensive against German troops in the western Soviet Union. 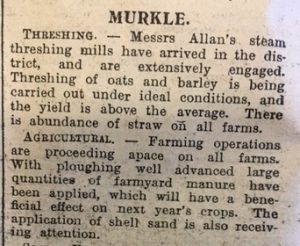 At Murkle in Caithness “Messrs Allan’s steam threshing mills have arrived in the district and are extensively engaged. Threshing of oats and barley is being carried out under ideal conditions, and the yield is above the average. There is abundance of straw on all farms.”

The head teacher of Gillock School in Bower recorded in the log book on 17 December that “The percentage of attendance, viz. 96.8, is the highest this session, and the cold has been most intense.”

Bower School itself, however, had not been so fortunate, as its log book records gloomily on the same date: “Bad footwear and the excuse, “his boots are at the shoemaker” have lowered the attendance still further.”

Canisbay School received a visit from the doctor this week: “Dr Mowat visited School, and made a thorough examination of every child in school. Throat trouble was seen to be prevalent among the children, several cases requiring attention. Dr Mowat intends returning later for inspection of the eyes.” 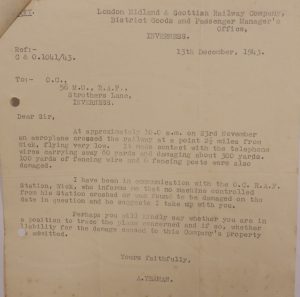 Finally this week, the commanding officer of the Inverness RAF received a letter from the LMS Railway Company, stating that, “At approximately 10.00am on 23rd November an aeroplane crossed the railway at a point 2½ miles from Wick, flying very low. It made contact with the telephone wires, carrying away 80 yards and damaging about 300 yards. 100 yards of fencing wire and 6 fencing posts were also damaged.” He had contacted RAF Wick who denied all knowledge and suggested he write to Inverness. “Perhaps you will kindly say whether you are in a position to trace the plane concerned and if so, whether liability for the damage caused to this Company’s property is admitted.”