On 15 November the Allied Expeditionary Force for the invasion of Europe was established and in Nazi Germany the order was given for Gypsies and “part-Gypsies” to be sent to concentration camps. On 16 November American bombers attacked a heavy water factory in German-controlled Vemork, Norway, effectively ending German plans to create an atomic bomb. On 20 November US Marines landed on Tarawa and Makin atolls in the Gilbert Islands and suffered heavy casualties from the Japanese defenders.

Some pupils of Canisbay School were absent, but not with the harvest. The log book on 16 November notes that one pupil in the Senior Room “is still absent, on the plea of broken spectacles.” Another pupil had their current extension extended: “this latest certificate enables her to absent herself from school until 22nd January 1944”. 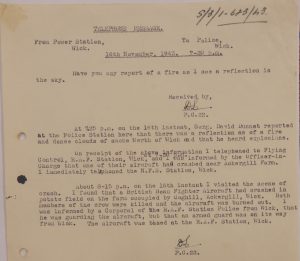 On the night of 17 November the police constable at the Power Station at Wick telephoned the police station to ask, “Have you any report of a fire as I see a reflection in the sky”. Flying Control at the R.A.F. Station confirmed “that one of their aircraft had crashed near Ackergill Farm”. It turned out that “a British Beau Fighter Aircraft had crashed in potato field on the farm occupied by Coghill, Ackergill, Wick. Both members of the crew were killed and the aircraft was burned out.” 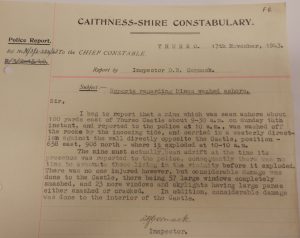 A mine was washed ashore about 100 yards east of Thurso Castle on the Sunday. It “was washed off the rocks by the incoming tide, and carried in a westerly direction against the wall directly opposite the Castle … where it exploded at 10-10 a.m.” Fortunately no one was injured, “but considerable damage was done to the Castle, there being 57 large windows completely smashed, and 23 more windows and skylights having large panes either smashed or cracked. In addition, considerable damage was done to the interior of the Castle.”

Finally this week, the John O’Groat Journal reported that 140 pairs of wellington boots had been received from the United States for Caithness school children. However, as “Over 700 applications have been received for the boots … Caithness Education Committee has recommended that rural children be provided first, and then burgh pupils who are not in good health.”