The German air force bombed the city of Stalingrad this week as German forces began to encircle it; soon the city would be effectively isolated on the eastern bank of the Volga. On Tuesday 25 August a flying boat, flying from Cromarty Firth to Duncansby Head and thence on to Iceland, inexplicably flew inland and crashed into a remote hillside at Eagle’s Rock near Dunbeath; 14 of the 15 people on board were killed, among them George, Duke of Kent, younger brother of the king. Also this week, on 30 August Rommel launched one last attempt to break through the British lines at El Alamein. 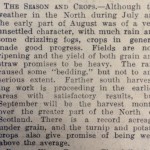 After a very familiar-sounding summer, the John O’Groat Journal reported that “although the weather in the North during July and the early part of August was of a very unsettled character, with much rain and some drizzling fogs, crops in general made good progress”. It added that harvesting was already underway further south, “but September will be the harvest month over the greater part of the North.”

Schools across the county went back for the autumn term on 25 August, though a number of children had picked up various ailments during the summer holidays. The log book for Dunnet Crossroads School records: “28 August: The attendance in the Infant Room was very good, but two pupils in the Senior Room were absent all week under medical supervision.” 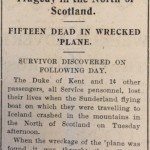 The death of the Duke of Kent in the plane crash was of course headline news, and the John O’Groat Journal reported it fully. The story was all the more dramatic because the only survivor, Flight Sergeant Jack, had left the scene by the time the search party arrived. 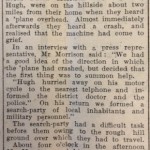 The crash was heard by David Morrison, a farmer, and Hugh his son. As Mr Morrison said, the first thing they did was summon help: “Hugh hurried away on his motor cycle to the nearest telephone and informed the district doctor and the police. On his return we formed a search party of local inhabitants and military personnel.” It took them a couple of hours to reach the site. “The ’plane had caught fire when it crashed,” said Mr Morrison, “and one part was still burning when we arrived. All the occupants were dead. Some were lying in the charred fabric of the ’plane and were badly burned. Others, including the Duke of Kent, had been thrown clear and lay scattered about.” 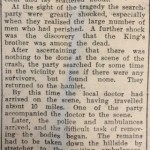 After searching for survivors and finding none they left the scene. One of the party escorted the doctor, and later the police and medical personnel to the crash site. “The remains had to be taken down the hillside by stretcher to the waiting ambulances, which had to travel a narrow route for eight miles before reaching the main road.”

It wasn’t till afterwards that it was realised that not everyone on board had been killed. Flight Sergeant Jack had been the plane’s rear gunner and had been thrown clear when it crashed, and knocked unconscious. When he regained his senses he went in search of help, so that he was missed by the search party: “He wandered over the hills and moors during the night, and was then found by crofters. By this time he was in a very exhausted condition, and was suffering from burns on his face and back.” He was treated by the local doctor, and subsequently taken to hospital: “The doctor could not understand how the airman had walked so far over the rough ground in his condition.”