On 9 November the Allies captured the Italian town of Castiglione and General Charles de Gaulle became president of the French Committee of National Liberation, known as the “Free French”. On 12 November German forces invaded the island of Leros in the Dodecanese and quickly overran the British and Italian troops there. In the Pacific American planes began daily bombing raids on Japanese bases on the Marshall and Gilbert islands.

The focus of farmers in the north Highlands had switched from bringing in the harvest to potato lifting. The John O’Groat Journal reported that in Brora, “Agriculturists are hard at work securing the potato crop. Ploughs, mechanical diggers and the old-fashioned method of the graip [a long-handled fork] are all being used. School boys are rendering valuable aid in securing the crop, which is of good quality and plentiful.” 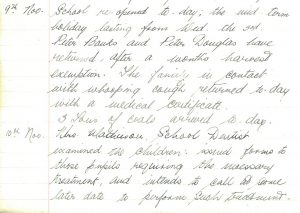 The head teacher of Canisbay School noted on 9 November that the mid-term holiday had marked the end of the harvest, and that the recent outbreak of sickness had run its course: “Peter Banks and Peter Douglas have returned after a month’s harvest exemption. The family in contact with whooping cough returned today with a medical certificate.” Next day, “Mrs Mathieson, School dentist, examined the children” to see who would require treatment; ominously the log book states that she would “call at some later date to perform such treatment”.

Bower School, on the other hand, had a visit from the School Medical Officer, who “expressed herself well satisfied with their general cleanliness, but found two pupils showing traces of itch.”

The Director of Education replied to a correspondent on 9 November on the subject of adult education classes in navigation, observing that “since the outbreak of war there has been no demand for these… There has been no demand for the subject in the day school but since the formation of the Sea Cadet Unit enquiries have been made. Each year a small number of students proceed to Leith Nautical and other colleges, some to take navigation and others to become wireless telegraphists.” 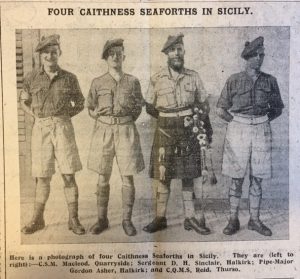