NORTH OF THE ORD

One Artist’s View of Caithness

An exhibition of textiles by Debbie Lee 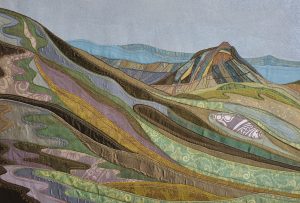 When Debbie Lee first started this collection of work, the country was in lockdown, so inspiration was therefore sought locally in  Caithness – her home – often on walks with her dogs and family.  ‘How lucky we were, to have this wonderful scenery to enjoy, especially at that time. It was a joy to look closer at the landscape that is fond to my heart and to make art inspired by it. The exhibition title:  ‘North of the Ord,’  is a term used traditionally to describe this county, which is much loved by its people. The ‘Ord Point,’  is the natural boundary between Caithness and the South on its Eastern Edge.’

The work is created through the collage of fabric and paper, then a layering of translucent fabric and machine stitch is added. It is then cut into to reveal earlier layers and is embellished with hand stitch. The final work is full of colour and pattern and joy of the landscape it depicts. 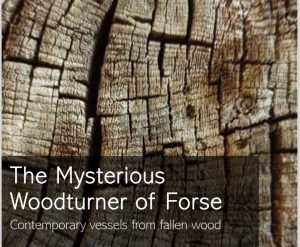 The Mysterious Woodturner of Forss

Rob Christie lives and works on the east coast of Caithness. In his spare time Rob works in his shed, turning or carving vessels from fallen trees around his home or jetsam found on local shores.  He never buys wood, only finds it.

Rob Christie says, ‘In the craft hierarchy, turned wood is the poor relation of pottery, which in turn lies below glass in the pecking order. Turning is the pastime of the bearded set of post retirement men in their sheds. Its my ambition to turn up the dial a bit and make things a bit more muscular. While reluctantly admitting to being a retired man in a shed.

Caithness may not seem like the ideal place for someone working in wood, but in truth, there are ample wooded areas with a diverse species list.  There are also miles of beaches where weather worn logs wash up, stained and altered by their voyages. So, while sourcing the raw material is not necessarily a problem, extraction may be.’ 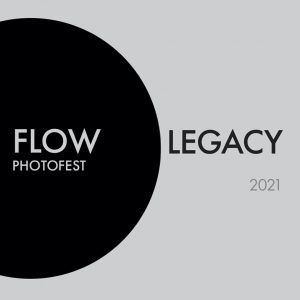 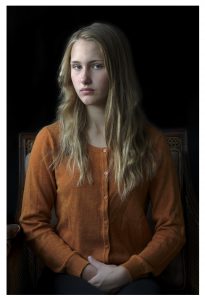 Jo Bentdal is a Norwegian photographer whose work is concerned with the relationship between society’s power structures and our individual development. What shapes us, and what controls us?

Bentdal, In his latest project, has produced a series of portraits of eleven teenage girls who are caught in the same, simple lighting. They confront us with a direct gaze; they stand out as serious and thoughtful individuals although they are also representatives of a collective state of something larger and universally human (Lars Elton) .

The traditional format and formal pose reference elements from Renaissance portraiture. But it is not older, privileged men in high-status roles who look at us, but young women with life ahead of them. They look straight at us, with authority. Can they trust us? 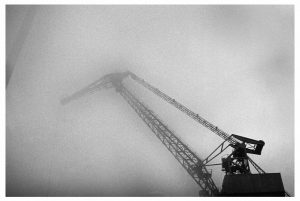 Scottish photographer Campbell writes of his practice: “I am a photographer and artist based in Glasgow, Scotland. Through my lens-based practice I seek to interrogate the inherent symbiosis between landscape and mythology – personal, cultural, political. Rituals, including those of the analogue photographic process, the invocations of moving image, incantations of atomic words and the power of uncanny objects form the interlocking parts of this inquiry into the physical and psychic structures that surround us.

As we hurtle through the Anthropocene, many of the dominant cultural myths are exposed as flawed, inaccurate, incomplete. How do we write the collective story of our times while desperately writing our own narrative? These are the propositions that drive my working practice.”  https://spcampbellart.cargo.site

The farthest point; the limit of any journey 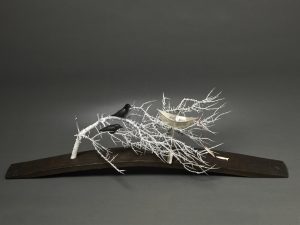 An exhibition of sculpture on the theme of migration.

War, violence and persecution has left 3.5% of humankind as refugees, displaced or seeking asylum – that was 272 million people in 2020.  Lucy Woodley was so moved by their plight, the desperation and hope which impelled them into making such life changing, often harrowing  journeys that she embarked on a series of sculptures attempting to tell the timeless story, spanning centuries of migration. The journey is depicted as a hopeful adventure to new shores and a better future or a desperate passage undertaken to anywhere to escape the place of departure, left with regret, often driven by fear. Three elements appear throughout the works which give a sense of continuity – a boat, three fish and a black bird. The Boat symbolises the journey; the Fish, an ancient religious symbol, represents faith or hope; the Bird, although sometimes seen as an ominous presence, suggests destiny or destination.

The work explores attempted journeys, some futile with an abandoned boat, deserted and empty, some successful with the boat elevated to an object of reverence and redemption. 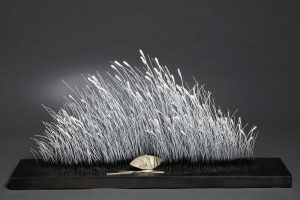 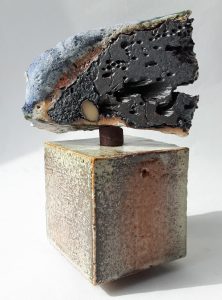 Jenny Mackenzie Ross’ exhibition is a mixture of sculpture and studio pottery.  The sculpture is process-driven and is about the relationship between geology and organic forms.  By contrast, she enjoys the tradition and functionality of studio pottery. Both sculpture and pottery are wood fired and soda glazed, imparting a depth and variance of colour across the surface of the pieces.

She has a studio, Northshore Pottery, near Latheron in a repurposed Oatmeal Mill which was saved from dereliction in the 1990s. 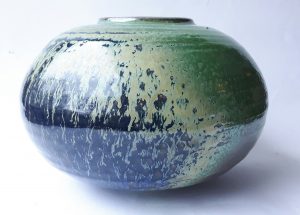 A Selection of Work from the Society of Caithness Artists 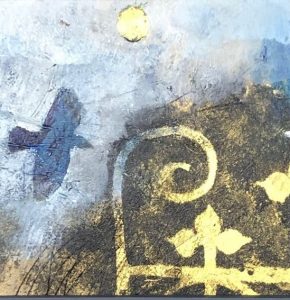 The Society of Caithness Artists has over 100 members and this exhibition showcases just a few of the artists’ works.  Covid restrictions have affected the showing of the work with all exhibitions being online this past year and this is the first physical exhibition since the lockdown, with HLH and SCA in partnership. The work ranges from local scenes to representations of thought provoking subjects in such diverse media as glass, oils, pen, watercolour and fibre. This exhibition marks Jim Mooney’s return to painting after many years working in other media and engages in a visual dialogue with the radical thinking of French philosopher and psychoanalyst Gilles Deleuze and Félix Guattari. The work focuses on aspects of the body and desire, in particular the virtual bodies produced by Deleuze’s articulation of a Body without Organs and painting as hallucination.

Mooney states: ‘Painting is most imperatively and essentially, an experimental space, where orthodoxies can be challenged and critically evaluated. Establishing a space where my own habits of thought, my conceptualisations and practical procedures, are susceptible to interruption, contestation and reconfiguration.’

The most  northerly photographic club in mainland Britain, Thurso Camera Club is a member of the Scottish Photographic Federation and was founded in the 1950s. This exhibition celebrates the wonderful variety of photography by its members over the last 60 years. Artists and designers have long been inspired by the varied and dramatic landscapes of the Nordic countries, the exhibition explores how nature and landscape is at the heart of Finnish, Swedish, Danish and Norwegian art and design.

Natural spectacles, from the bewitching aurora borealis to the white nights of the frozen north, as well as local materials like birch wood, have contributed to a distinctly Nordic aesthetic.

Nordic by nature: modern design and prints uses the British Museum’s collection to look at how Finnish, Swedish, Danish and Norwegian artists and designers have created distinctive objects and imagery that are rooted in the culture, traditions and industries of those nations and often embody national pride.

44 remarkable British Museum objects and works on paper will illustrate how these artists and designers have been drawn to common themes. Exhibition highlights include pioneering pieces by one of the leading figures in Finnish design, glassmaker Tapio Wirkkala (1915-1985), which resemble melting, cracked or carved ice and are shown against prints of stark icy landscapes.

Additionally, the exhibition brings together a range of Swedish prints, ceramics, and glass works from Småland, which is known as the Kingdom of Crystal. On display will be experimental and minimalist works from Denmark, including Erik Magnussen’s (1940-2014) revolutionary table wares of the 1960s and Per Kirkeby’s (1938-2018) light-hearted print, Telephone rings (1964).

With the support of the Dorset Foundation in memory of Harry M Weinrebe, the Thurso Gallery is one of only 4 UK venues to which the exhibition will travel. The Art Gallery In Thurso Library

The Art Gallery In Thurso LibrarySaturday, November 23rd, 2019 10:41pm
We have our shelves filled with Christmas goodies. Shop open during gallery hours.
View on Facebook

The Art Gallery In Thurso LibrarySunday, November 10th, 2019 5:41pm
Change Over Week. The Gallery is Closed until Saturday 16th November
View on Facebook
We use our own and third party cookies. If you continue browsing we consider you accept the use of cookies.
Read More Accept