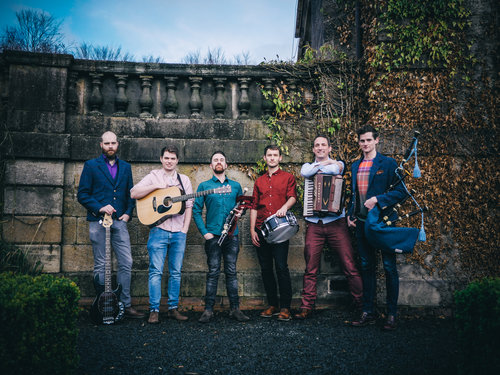 Mànran are one of the best-known and best-loved Scottish bands on the scene today. The 2011 launch of their debut single, “Latha Math” heralded a meteoric rise to the top of the Scottish music world that quickly saw them playing many of the most prestigious festivals in Europe despite having only been in existence a few short months. From then, a multi-award-winning debut album followed as the band set about living up to the hype surrounding their early release while establishing their characteristic sound and distinctive approach to musical arrangement.

Variously tagged as “folk-rock”, “trad-rock” (that one coming from former First Minister, Alex Salmond), “Celtic-rock” and even “grown-up folk-rock”, Mànran’s music has always defied easy labelling due to the eclectic mix of influences on the band and the alchemy that melds them. With a central ethos built around the band’s traditional Celtic roots, fiery tunes from fiddle, accordion, flute, uillean and Highland bagpipes bind powerfully to a rhythm section awash with elements of funk, jazz and rock to create some of the most innovative and uplifting instrumental music around. Coupled with songs in both Gaelic and English that undergo the same musical mixology, it’s easy to understand why Mànran are in such high demand as a live act. With music ranging from the explosive to the poignant and, at all times, a palpable connection to their audience, Mànran thrive on live performances and spend most of the year touring and bringing their music to new parts of the World. So far, this has taken the band all over Europe and the USA as well as Australia (where the band was awarded the accolade “International Artist of the Year” at the Australian Celtic Music Awards despite having only performed in Australia once by that point!) and Asia, including a trip to South Korea in 2014.

Now with three highly regarded studio albums under their belt and seven triumphant years of blowing audiences away with healthy amounts of passion, poise, virtuosity and vigour, Mànran are continuing to explore new musical and geographical territory.

2017 was arguably the band’s busiest on record with full tours of Germany, Denmark and a non-stop summer packed full with Scottish and European festival dates. 2017 culminated in a welcome return to Scottish TV screens as Mànran welcomed the New Year on BBC Alba’s Cèilidh na Bliadhn’ Ùire New Year special.

2018 got off to a flier with the release of the band’s latest single ‘Là Inbhir Lòchaidh’ to great critical acclaim, yet another sold-out headline show at Celtic Connections and a highly successful tour of France. Since then, an action-packed summer has seen the band perform all around Scotland and at festivals in Luxembourg, France, Germany and Spain whilst also working on new material for their upcoming fourth studio album, set to be completed by the end of the year.