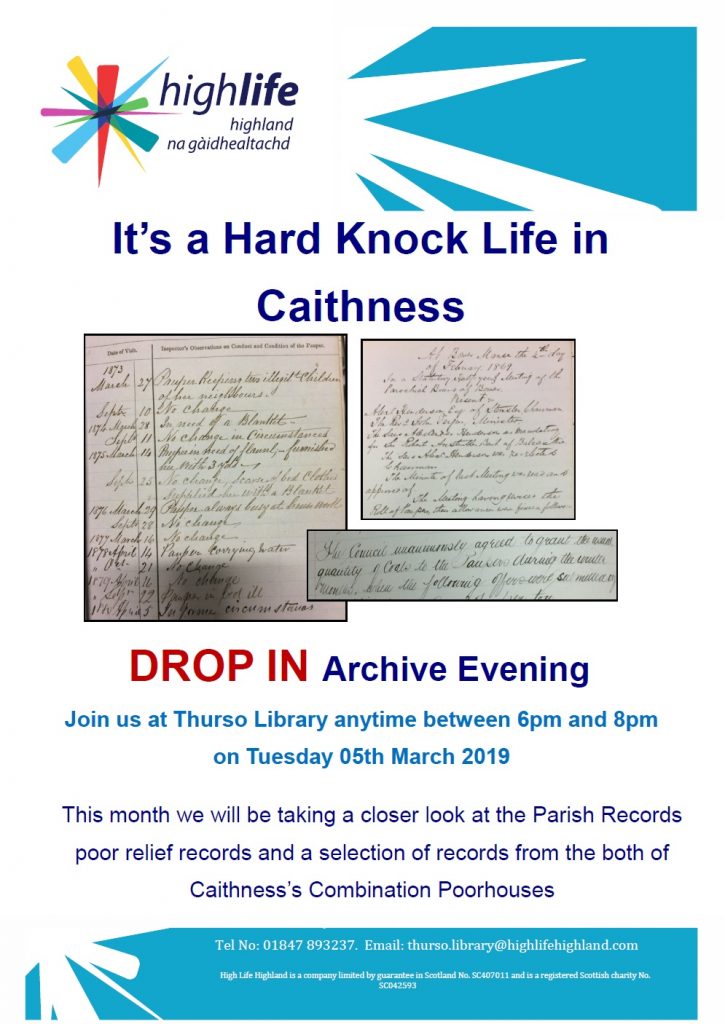 Join archive at Thurso library on

This month we will be taking a look at the Parish Records for the relief of the poor,

and a selection of records from both of Caithness’s Combination Poorhouses.

The Poor Law (Scotland) Act 1845 established parochial boards in rural parishes and in towns to administer poor relief (see CC/7). In 1894 they were abolished and replaced by wholly elected parish councils, but with their functions practically unchanged. Parish Councils were in turn abolished in 1930 under the Local Government (Scotland) Act 1929, and their functions transferred to county councils and large burghs, acting through Departments of Public Assistance (or Public Welfare). In 1948 the existing poor law was entirely abolished and almost all of it replaced by a national system, the forerunner of the modern ‘social security’ (National Insurance Act 1948).

Although the 1845 Act allowed parishes to operate poorhouses, it did not require them to do so as was the case in England and Wales. Adjacent Scottish parishes could also join together to form “Combinations” and operate Combination poorhouses.

There were two in Caithness: the Latheron Combination Poorhouse, built c.1854 for the parishes of Latheron and Wick (see CC/7/5/9); and Thurso Combination, built c.1854-6 for the 8 parishes of Bower, Canisbay, Dunnet, Halkirk, Olrig, Reay, Thurso and Watten (see CC/7/8/9). In addition, a locally administered parochial poorhouse or almshouse was operated by the parish of Dunnet from at least the early 1870s.

The Thurso Combination was formed in about 1853 and comprised the 8 parishes of Bower, Canisbay, Dunnet, Halkirk, Olrick [Olrig], Reay, Thurso and Watten. The Poorhouse was built in 1854-6 on a five-acre site at the west side of the Thurso Road to the north of Halkirk. The poorhouse closed in May 1917 with the majority of residents being transferred to the Latheron Town and Country Home. In 1924, the poorhouse building was sold, having stood empty for several years; it was eventually converted into housing.

Nucleus: The Nuclear and Caithness Archive

Our collections include: Wick and Thurso Burgh minutes, Caithness County Council (school records, poor law records and planning applications), Caithness Constabulary, Wick Harbour Trust, and many more... High Life Highland is a company limited by guarantee registered in Scotland No. SC407011 and is a registered Scottish charity No. SC042593

Nucleus: The Nuclear and Caithness ArchiveMonday, December 2nd, 2019 2:30pm
Look at these wonderful shoes!! Taken from the Wick Players exhibition, which we have in the building until January. If you've not been up to see it already, we recommend a visit!

Nucleus: The Nuclear and Caithness ArchiveSaturday, November 30th, 2019 3:32pm
#wildarchives.#exploreyourarchives. Another treasure from within the archive. A wonderful handwritten and illustrated book by Christina Davidson circa 1950. A nice afternoons read for a cold Winters day.

Nucleus: The Nuclear and Caithness ArchiveFriday, November 29th, 2019 2:00pm
Today's theme for the #exploreyourarchive event is #mysteriousarchives 🤔 Here are some of the reports and information on a bog body that was found up in Keiss in 1975, which was believed to be from the early 17th Century! #nucleus #bogbody

Nucleus: The Nuclear and Caithness ArchiveFriday, November 29th, 2019 11:22am
High Life Highland is seeking an enthusiastic and committed individual to deliver a high-quality public archive service at Nucleus: The Nuclear and Caithness Archives. The successful applicant will be responsible for looking after the extensive Caithness archive collections (which date from the 15th century onwards) as well as managing staff and volunteers, liaising with a wide variety of stakeholders, contributing to the Nucleus community engagement programme and developing the service and collections.

If you have an interest in local and family history and are committed to developing your skills in a large and diverse organisation, this could be the opportunity for you.

An application pack and further information can be found on our website: www.highlifehighland.com/about/recruitment