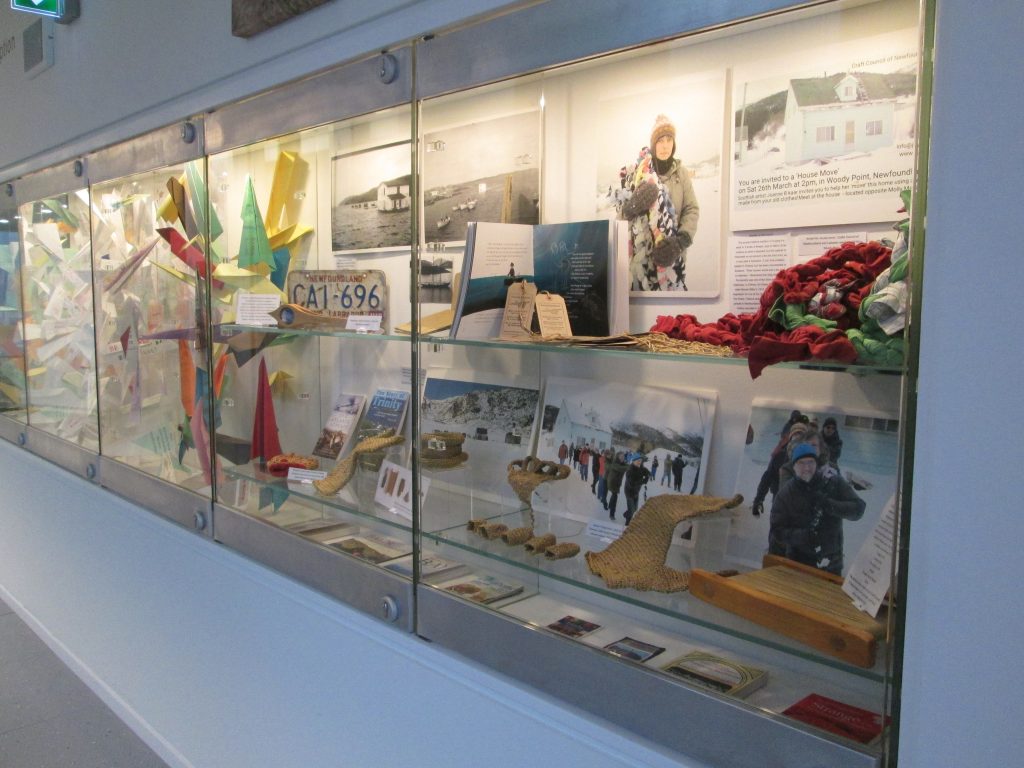 Nucleus latest exhibition launches on the 14th of February 2020 with a talk from Artist Joanne B Karr at 11am. Simultaneously Newfoundland’s exhibition at the Craft Council of Newfound and Labrador Gallery will also launch. Also on display at the Nucleus will be historical documents from the period of the flight and selected drawings from Joanne Karr.

On the 18 May 1919, Australian aviator Harry Hawker and navigator Kenneth Grieve took off from Newfoundland, Canada aiming to be the first to successfully complete a continuous flight across the Atlantic Ocean. Bad weather and an overheating engine however forced them to make a risky landing and hope a passing ship could rescue them. Luckily, they spotted a steamboat and were picked up about 750 miles off the coast of Ireland.

Eight days later Hawker and Grieve arrived at an unlikely place, for the steamer had dropped them off at a small port in the far north of Scotland, Scrabster. The two pioneers encountered a warm welcome from the local residents, who were excited by the story of trans-Atlantic flight. Both were later awarded the Air Force Cross in recognition of their efforts.

The pair’s chance visit to Scrabster formed a link between Newfoundland and Scrabster that has been re-discovered by artist Joanne B. Karr of Dunnet, who learned about the flight from an article in the John O’Groat Journal newspaper. Joanne is a self-employed artist who has worked all over the globe and collaborated on a variety of projects, focussing on culture and heritage. Her recent contribution was forming the idea of pairing up heritage centres and museums in Caithness and Sutherland to ones in Newfoundland and exchanging paper aeroplanes to commemorate the flight and rekindle the century-old trans-Atlantic link. Wick Brownies, Castletown Primary School, Castletown Heritage Society and Wick Heritage Society, among others, have all made planes and many have enclosed messages of goodwill and kindness inside. Reminiscent of the spirit displayed by the crew of the steamer ‘Mary’ that rescued Hawker and Grieve, and the crowed that greeted them in Scrabster Harbour.

Nucleus: The Nuclear and Caithness Archive

Our collections include: Wick and Thurso Burgh minutes, Caithness County Council (school records, poor law records and planning applications), Caithness Constabulary, Wick Harbour Trust, and many more... High Life Highland is a company limited by guarantee registered in Scotland No. SC407011 and is a registered Scottish charity No. SC042593

Nucleus: The Nuclear and Caithness ArchiveMonday, December 2nd, 2019 2:30pm
Look at these wonderful shoes!! Taken from the Wick Players exhibition, which we have in the building until January. If you've not been up to see it already, we recommend a visit!

Nucleus: The Nuclear and Caithness ArchiveSaturday, November 30th, 2019 3:32pm
#wildarchives.#exploreyourarchives. Another treasure from within the archive. A wonderful handwritten and illustrated book by Christina Davidson circa 1950. A nice afternoons read for a cold Winters day.

Nucleus: The Nuclear and Caithness ArchiveFriday, November 29th, 2019 2:00pm
Today's theme for the #exploreyourarchive event is #mysteriousarchives 🤔 Here are some of the reports and information on a bog body that was found up in Keiss in 1975, which was believed to be from the early 17th Century! #nucleus #bogbody

Nucleus: The Nuclear and Caithness ArchiveFriday, November 29th, 2019 11:22am
High Life Highland is seeking an enthusiastic and committed individual to deliver a high-quality public archive service at Nucleus: The Nuclear and Caithness Archives. The successful applicant will be responsible for looking after the extensive Caithness archive collections (which date from the 15th century onwards) as well as managing staff and volunteers, liaising with a wide variety of stakeholders, contributing to the Nucleus community engagement programme and developing the service and collections.

If you have an interest in local and family history and are committed to developing your skills in a large and diverse organisation, this could be the opportunity for you.

An application pack and further information can be found on our website: www.highlifehighland.com/about/recruitment