On 24 December US General Dwight D. Eisenhower was appointed the Supreme Allied Commander in Europe. By 25 December the Allied offensives in Italy had reached something of a stalemate and the decision was taken to halt and regroup, though fighting continued in places all along the line. And on 26 December the German battleship Scharnhorst was sunk off North Cape in the Arctic by British naval forces.

Schools in Caithness were ending the year with poor attendances, mostly because of illness. Canisbay School log book has the following entry for 24 December: “School closed for Christmas Vacation on Thurs. 23rd December to reopen on January 4th. Attendance has deteriorated owing to weather and flu epidemic.”

Things were even worse at Pulteneytown Academy in Wick. The head teacher wrote on 20 December: “An epidemic of flu has caused a very serious fall in the attendance for the whole school for the last three weeks. Whooping-cough, mumps, chicken pox and skin disease are also prevalent. Two cases of scarlet fever have been certified.”

The John O’Groat Journal reported a terrible tragedy this week, when four children of the same family were killed in a fire a mile from Dunbeath village. The father was on active service, and the mother had taken the eldest daughter to visit a neighbour when the fire broke out. It seems that in this case the blackout shades on the windows prevented the fire being noticed sooner, since no sign of fire could be seen from outside until it was too late. 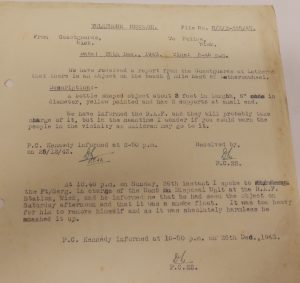 On 25 December the coastguard spotted an object on the beach ½ mile east of Latheronwheel, a bottle shaped object about 3 feet in length. PC Kennedy, the local constable, was informed and next day he reported: “I spoke to the Flight Sergeant in charge of the Bomb Disposal Unit at the RAF Station, Wick, and he informed me that he had seen the object on Saturday afternoon and that it was a smoke float. It was too heavy for him to remove himself and as it was absolutely harmless he smashed it up.”

Finally this week, as noted above, schools around the county were breaking up for the Christmas holidays on 23 December. At Crossroads School, “In the afternoon, children, parents & friends met in the school. Rev. A.M. Gordon presided and a varied and entertaining programme was provided by the children. Tea was served. Santa, impersonated by Flight Officer Roberts, appeared and presented each child in the district with a gift. Gifts of sweets, nuts, toffee and money were also handed to each child.”