In Italy, Allied forces launched offensives against the Germans’ “Winter Line”, with Canadian forces attacking across the Moro River and the US Fifth Army attacking the Bernhardt Line. On 11 December over 140 German planes were shot down Emden, and on 12 December the Soviet Union and Czechoslovakia signed a mutual assistance treaty. Also on 12 December Hitler appointed Rommel head of defences in France in preparation of the expected Allied invasion of Europe next year.

In Caithness, farmers had begun early ploughing of the fallow fields. In Reay, the John O’Groat Journal reported, “some have even started the lea ploughing. This is all right on farms where the ground is in dry condition, but it is not profitable where the fields are wet.”

At a meeting of the Education Committee on 8 December it was noted that “gifts of toys and boxes of sweets from the British War Relief Society of the USA were being dispatched to the Director of Education for allocation among 100 children in the county (‘mainly for the Burgh of Wick’). The donors requested that the needs of evacuated children should receive prior consideration.”

Meanwhile, the winter illness epidemics continued to affect the county’s schools. The same meeting of the Education Committee noted an order for “the closing of the Infant Department of Castletown School from 6th to 17th December inclusive on account of an outbreak of whooping cough and chicken-pox.”

Attempts to resolve the children’s boot and shoe shortage had begun, but were not without complications. The head teacher of Gillock School recorded in the school log book in some exasperation on 10 December: “[name redacted] received a size 4 pair of [wellington] boots for which 3 coupons are required, the pair sent for [name redacted] were size 4, 3 sizes too small. Children his age (5) require size 12.” 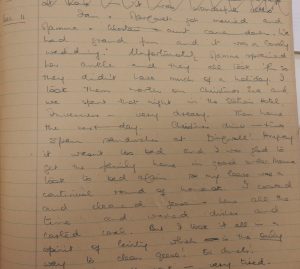 Finally this week, Hetty Munro of Thurso recorded a family wedding and wartime Christmas in her diary (“unfortunately Mamma sprained her ankle and they all took ‘flu so they didn’t have much of a holiday”). They went to Inverness on Christmas Eve and spent the night at the Station Hotel, which was “very dreary. Then home the next day. Christmas dinner – two spam sandwiches at Dingwall! Anyway it wasn’t too bad and I was glad to get the family home in good order.”