On 2 December in America fifteen atomic scientists were brought to New Mexico to work on the development of an atomic bomb. Also on 2 December Ernest Bevin, Minister for Labour, announced that ten per cent of male conscripts would be sent to work in Britain’s coal mines to make up the shortage of miners; by 1948, when the scheme ended, some 48,000 men, who became known as “Bevin Boys”, would have served in the mines. Also this week, on the night of 3 December a thousand civilians died in an RAF air raid on Leipzig.

In Caithness, some schools were getting ready for Christmas. Freswick School log book has the following entry for 3 December: “We have begun learning a few carols and songs for the Xmas Treat. Again this week there was perfect attendance.”

The logistics of providing rubber boots to the county’s school children was proving far from straightforward. The head teacher of Gillock School, after recording that “The annual service of the “Week of Witness” was held on Wednesday afternoon from 2 p.m. to 3:30 by Rev. C. Smith & Rev. D.M. McEchern”, made the following sardonic note in the logbook: “The wellington boots for this school have been sent to Bower.”

The John O’Groat Journal carried an account of the annual general meeting of the Caithness Moral Welfare Committee. The secretary reported that, “In many cases it was found that the results of illegitimacy were regarded as a nuisance rather than with any sense of moral responsibility. The Committee had been doing what they could by publishing appeals for a higher sense of moral conduct and obligation”. 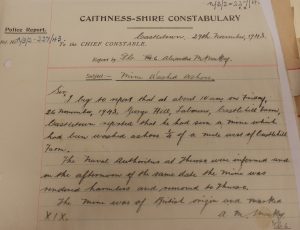 On 29 November Constable Mackay at Castletown reported “that at about 10 am on Friday, 26 November, 1943, George Hill, labourer, Castlehill Farm, reported that he had seen a mine which had been washed ashore ¼ of a mile west of Castlehill Farm. The Naval Authorities at Thurso were informed and … the mine was rendered harmless and removed to Thurso.” 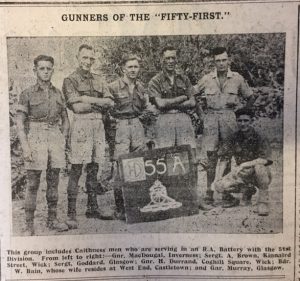 Finally this week, the John O’Groat Journal featured another photograph of soldiers fighting overseas: “This group includes Caithness men who are serving in an R.A. [Royal Artillery] Battery with the 51st Division.” Among those in the photograph are Sgt A. Brown, Kinnaird Street, Wick; Gunner H. Durrand, Coghill Square, Wick; and Bombardier W. Bain, “whose wife resides at West End, Catletown.”