In Italy, after delays caused by heavy rain and the need to regroup, Allied forces finally launched an assault on German positions across the River Sangro on 28 November. US troops completed the capture of Tarawa Island from the Japanese and the RAF launched a heavy bombing raid on Berlin. Also this week, Roosevelt, Stalin and Churchill met at the Teheran Conference, where Britain and America committed to an invasion of Western Europe in 1944.

The John O’Groat Journal reported that farm work was going well in Caithness. In Reay, “both hill and field sheep look well and … farmers can look for favourable results when the lambing season comes on”. In the corn-yard, “threshing mills are kept busy at many farms, and good returns are resulting from the “riddles” [threshing sieves]. Some samples that have reached the miller scale over 40lb.”

Attendance at Gillock School in Bower was still being affected by illness. The head teacher wrote in the log book on 26 November: “In spite of exceedingly stormy weather the 16 pupils in attendance have perfect attendance this week… There are 4 defaulters [including one] family who are still suffering from whooping cough”. 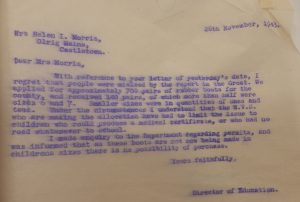 Last week the John O’Groat Journal had reported that rubber boots would be supplied to schoolchildren. On 26 November the Director of Education had to write a letter clarifying the situation: “We applied for approximately 700 pairs of rubber boots for the county, and received 140 pairs, of which more than half were sizes 6 and 7. Smaller sizes were in quantities of ones and twos. Under the circumstances I understand that the W.V.S. who are making the allocation have had to limit the issue to children who could produce a medical certificate, or who had no road whatsoever to school.”

Caithness County Council debated the sad case of the death of a horse belonging to William Morris, farmer, of Olrig Mains: “during the previous night a three-year-old filly belonging to him had gone into a hole opened by the Sexton, 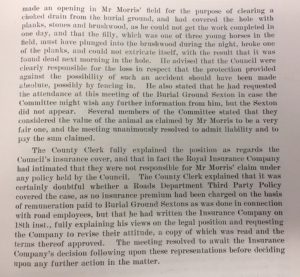 Olrig Burial Ground, in a field adjoining the Burial Ground, and was found dead next morning.” Apparently the sexton had made the hole to clear a choked drain; but when invited to a meeting to explain the situation, “the Sexton did not appear”. The Council accepted liability, felt that the compensation Mr Morris requested was fair, and resolved to take the matter up with their insurers.”

Finally this week, Norseman in the John O’Groat Journal reflected on the Council’s decision to employ a rat catcher. In particular he speculated on whether the successful applicant would receive a pension – “Or will he have to face the risk of losing his office if he kills off his rats too quickly, and thus wake up one morning like Othello and find his occupation gone?”

Coming soon! Week 222, 29th November – 5th December 1943, will be published on Monday 28th November 2016. To view previous issues please use the menus on the right hand side of the page.