On 8 June, Japanese forces finally evacuated the Aleutian Islands close to the USA, their last foothold in the Western hemisphere. Also this week, Allied forces began to move in on Italy, their next target now that North Africa had been liberated: the islands of Pantelleria and Lampedusa were taken, along with over 11,000 Italian prisoners. And on the night of 11-12 June, 800 RAF planes launched a massive bombing raid on Düsseldorf in Germany.

In Caithness, peat-cutting season was now underway. The Head Teacher of Crossroads School in Dunnet recorded in the log book on 11 June: “This week the parent asked exemption for a senior boy for peat cutting. Otherwise the attendance has been very satisfactory.”

Unfortunately the risks of this sort of activity in wartime were highlighted this week in a report in the John O’Groat Journal: “A distressing accident occurred in the peat moss at Latheronwheel on Monday while peat cutters were engaged at work… The workers came upon a small object, which no one had ever seen before. It exploded, and a young man, William Macdonald, Latheron, was badly injured about the face.”

Also in the John O’Groat Journal this week, three young boys (aged 9 and 10) appeared in Juvenile Court this week accused of stealing articles, including rubber boots and umbrellas, from a dwelling house. The mother of two of the boys had found the stolen goods, “thrashed them for their bad behaviour”, and insisted they return them, but the police had arrived before this could happen. “Asked by the Sheriff what he wanted to do with an umbrella, one boy said, “I wanted to be a parachute.” A second boy, asked why he took the rubber boots, said: “I was going to wade for tadpoles.”” The boys were put on probation for two years.

Finally this week, the paper reported that Captain Ernest Fresson had received an OBE. “Captain Fresson was a pilot in the last war, and he recently completed 25 years of flying… Ten years ago he founded Highland Airways, which operated a mail and passenger service from Inverness to Wick and Kirkwall.” Captain Fresson made the inaugural flight himself, landing in Wick on 29 May 1933. Earlier in the same month he flew the first scheduled passenger service on the same route and in November of 1934 he operated the first UK air ambulance flight. 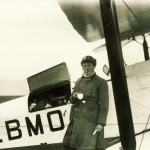 Here is a picture of Captain Fresson taken c. 1933 from the Am Baile website. This photo is held at Caithness Horizons in Thurso.