Having taken Tunisia the Allies now began to bomb site sin Sicily and Sardinia as a precursor to invasion. On 22 May the German Messerschmitt Me 262 jet plane reached 520 mph in its inaugural test flight, faster than any other aircraft of the time. On 24 May the German navy took the decision to withdraw almost all U-boats from the Atlantic after heavy losses. Also this week, Churchill and Roosevelt met at Washington DC to plan the coming Italian campaign.

In Caithness spring work on the farms was well underway. The John O’Groat Journal reported that in Dunnet, “The sowing of oats is completed, and nearly all the planting of potatoes. The milder, moist weather has proved beneficial to crops.”

In Brora, the salmon netting season was underway: “Net fishers of Sutherland Estates and of Ascoile Estates had another successful day on Loch Brora on Tuesday, when their catch amounted to 320 fish.”

Meanwhile, the Wick Harbour Trust was embroiled in a dispute with the Coal Supplies Officer Scottish District. The Trust’s supplier, Mr D.W. Bain, was finding it hard to source Scottish coal and was relying on coal from English mines which the Trust regarded as unsatisfactory. The Trust had written to the Coal Supplies Officer requesting deliveries of coal from Scottish mines. Now came the reply from the officer (a person whom the Trust’s Secretary in another letter was refer to as “a most obtuse official”): “Surely Mr Bain was entitled to make all arrangements in connection with the supply … before completing the contract…there is no need for coal to be railed from Scotch Collieries to Wick.”

Wings for Victory Week in Caithness had raised almost £180,000, mostly from small savers. The county’s War Savings Committee debated how the money had been invested this week, and it was noted that, “had the Institutional or Company Investors supported the “Week” to the same extent as Warship Week last year, the total result would have shown approximately £80,000 more.”

Finally this week, the John O’Groat Journal reported the unveiling of the public memorial in honour of Alexander Bain, inventor of the electric clock and the electric printing telegraph, at Watten the previous Saturday. “The memorial, a beautiful example of monumental art in granite, stands in a prominent place on the south-west side of the main road in Watten.” As Commander Gore Browne Henderson said, “It was most fitting that they should, in the midst of a devastating war, do honour to one whose thoughts were always on peaceful and useful inventions.” 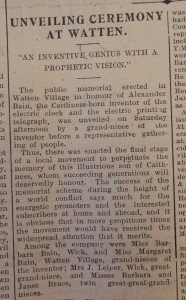 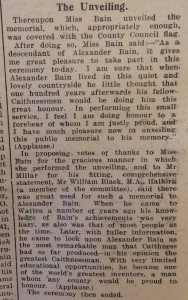