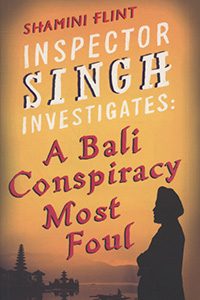 I’m afraid that Insector Singh didn’t go down too well – it was one of those books that says quite specifically what it is on the tin – or rather the cover, in this case, and that was enough to put quite a few people off from even reading it! Basically it was a bit of a bog standard murder mystery of the cosy kind – nothing too taxing, a plot twist that was screamingly obvious pretty much from page one, characters drawn in biro if drawn at all. There were a few interesting observations on the Suicide Bomber mentality, and undoubtedly the strongest part of the book was the character of Nuri, young Muslim wife of one of the bombers, coming to realise what else there was out there in the world. Some great subtlety as far as she was concerned, particularly in relation to her older husband and her headstrong brothers. But not enough to carry the novel to any great heights. The main character of Inspector Singh was unlikeable and his sidekick – brash Aussie Bronwyn – unremarkable, so much so that no one really cared when she blew herself up for the good of humanity.

On top of that we mostly thought it rather distasteful to base such a trite plot on the real life Bali bombings of 2005 (bombings that have been repeated since on a number of occasions) that killed real people and injured a huge amount more.

Don’t think anyone will be running out to read another Inspector Singh novel any day soon.