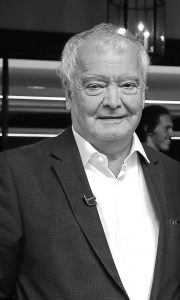 Professor Sir Tom Devine Kt OBE FRSE FBA is one of Scotland’s most eminent and respected historians.  He retired in 2015 after a long and distinguished career at the Universities of Strathclyde, Aberdeen and Edinburgh.  He is currently Professor Emeritus at the latter institution.

In 2001 Her Majesty The Queen awarded him the Royal Gold Medal – Scotland’s supreme academic accolade – together with the late Nobel Laureate, Sir James Black, inventor of beta-blockers.  He is a Fellow of the Royal Society of Edinburgh, the British Academy and Honorary Member of the Royal Irish Academy, making him the only historian in Britain to be elected to all three national academies.  In 2018 he received the Lifetime Achievement Award from the all-party parliamentary group on Archives and History at the Houses of Commons and Lords – the first historian from a Scottish university be so honoured.

His most recent book The Scottish Clearances: A History of the Dispossessed 1600-1900 was published in 2018 by Allen Lane: The Penguin Press, and was made ‘Book of the Year’ by The Herald, The Telegraph and The Times. Andrew Marr, writing in The Sunday Times, described it as “a superb book…anyone interested in Scottish history needs to read it”. Diana Gabaldon, author of the Outlander series of novels, described the book in The Sunday Telegraph as “amazing…so damn readable”. The paperback version will be published in early May.

Sir Tom’s appearance to talk about the book at Aye Write in Glasgow in March sold more tickets than any other event at the festival. We are expecting similar levels of interest for our forthcoming event at Inverness Museum and Art Gallery’s on 19 June. This commences at 5.30pm in the museum café with a wine reception, book sales and signing, together with the opportunity for guests to see the Another Country: Contemporary Artists and Immigration exhibition in the main gallery upstairs. It then moves to the main hall at Inverness Town House for a lecture by Sir Tom Devine on his book, commencing at 7pm, and followed at 8pm by a Q&A session chaired by Dr. David Worthington, Head of the Centre for History at the University of the Highlands and Islands. #InvMAG #DevineEvening

Call 01349 781730 or pop into IMAG reception to book.  For more info please email us.
£12.00 per person
Please note that bookings will be confirmed on receipt of payment.