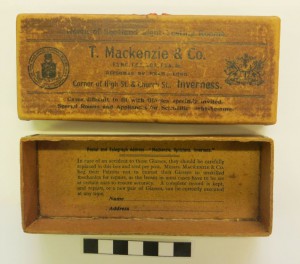 On the corner of High Street and Church Street, Inverness, was the shop of T. MacKenzie & Co, Chemist and Druggist. He advertised the sale of ‘all medical and surgical requisites’ and was also an agent for Kodak. This glasses case was made by T. MacKenzie & Co. and dates from the mid-20th century. 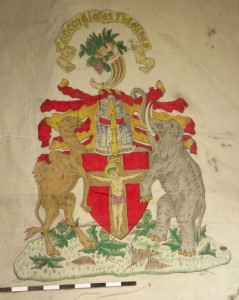 This is a large flag made from linen with the old Inverness Royal Burgh coat of arms painted on one side. The coat of arms incorporated a camel and an elephant, which was a reminder of its foreign trade links. This was changed in 1975, to coincide with the formation of the Highland Council.

Painting of the Inverness Riverfront 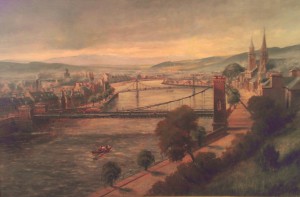 An oil painting on canvas of the Inverness riverfront, painted by Aberdeen artist, John Small, in 1887. Small travelled around Scotland painting topographical scenes and exhibited various times at the Aberdeen Artist’s Society over his lifetime, as well as at the Royal Scottish Academy in Edinburgh in 1894.

Purchased with assistance from the National Fund for Acquisitions and the Inverness Common Good Fund.

A figurine made of lead, found at Black Park Farm, Inverness. This could possibly be of Saint Cecelia, the Patron Saint of Music.