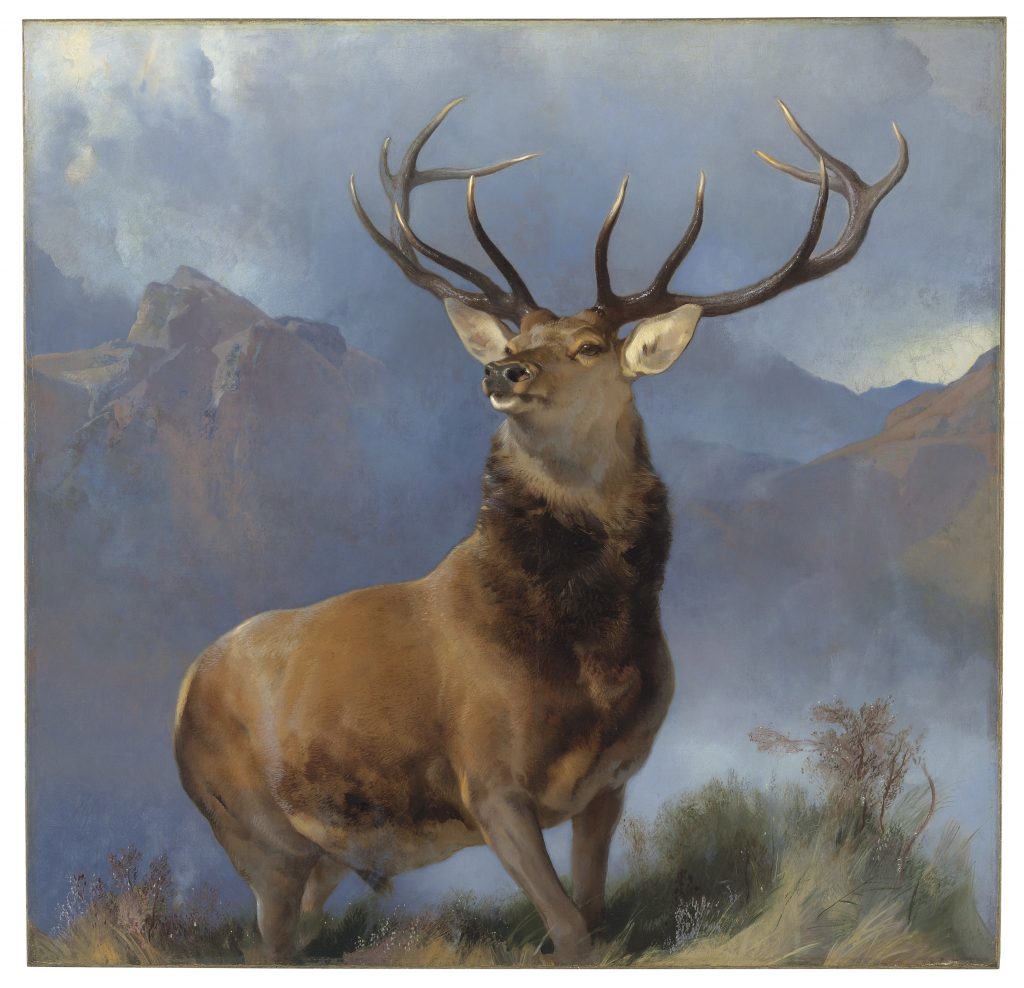 #MonarchoftheGlen
The National Galleries of Scotland (NGS) is delighted to announce that The Monarch of the Glen by Sir Edwin Landseer (1802-73) will go on display in four venues across Scotland later this year. The iconic painting which was acquired for the nation in March after a four month fundraising campaign will go on show in Inverness, Perth, Paisley and Kirkcudbright.
The acquisition was made possible thanks to the enormous support from the public, The National Lottery, Art Fund, private trusts and foundations, Scottish Government acquisition grant funding and by a part gift by previous owners Diageo Scotland Ltd. The National Lottery and Scottish Government also gave additional funds to enable the painting to go on tour in Scotland.
The tour will begin in early October 2017 in Inverness and the painting will be on view for around 7 weeks at each venue.
The Monarch of the Glen is one of the most famous images associated with Scotland. Through its widespread use in commercial advertising and in popular culture, the picture has become instantly recognizable yet it remains an extremely powerful work of art and a rich source of debate about issues of history and identity. The tour forms part of the National Galleries on-going commitment to sharing its collection and working in partnership with communities across Scotland.
Sir John Leighton, Director-General of the National Galleries of Scotland said: “Thanks to the generosity of The National Lottery and the Scottish Government we are able to take this fantastic picture across the country to be enjoyed by as many people as possible. We want this tour of The Monarch of the Glen to be seen as a huge thank you for the overwhelming support that we received during the fundraising campaign and as a celebration that this amazing work of art now belongs to all the people of Scotland. We hope that it will be admired and debated by wide audiences across the country. ”
Fiona Hyslop, Cabinet Secretary for Culture, Tourism and External Affairs, said: “This tour will support people of all ages and backgrounds across Scotland to access and enjoy this iconic painting in their own communities, and will hopefully inspire those who see it to seek out further opportunities to engage in culture and the arts. I am pleased the Scottish Government was able to support both the acquisition of the painting, and its tour.”
It was announced in November last year that NGS had entered into a partnership agreement with Diageo. Under the arrangement, Diageo agreed to gift half the estimated market value of the painting to allow NGS the opportunity to acquire the work for £4 million. After securing support from the Heritage Lottery Fund and Art Fund, NGS launched a public fundraising campaign to help raise the final amount. Support for the public campaign came from around the world with donations received from Anchorage, Queensland, Los Angeles and Hong Kong and from across the UK from Thurso to Bath totalling over a quarter of a million pounds. An additional £100,000 from the NGS acquisition fund from Scottish Government and donations from private trusts and foundations enabled the £4 million target to be reached.
Referring to the Monarch of the Glen Tour starting in Inverness, Ian Murray, Chief Executive of High Life Highland who manage and operate Inverness Museum and Art Gallery, said: “We are very pleased to be working in partnership with the National Galleries of Scotland to support bringing this iconic painting to Inverness. The Monarch of the Glen is an immediately recognisable image to people in Scotland and across the world and we are delighted that residents and visitors to the Highlands have a chance to see the painting when it comes to Inverness in October.”