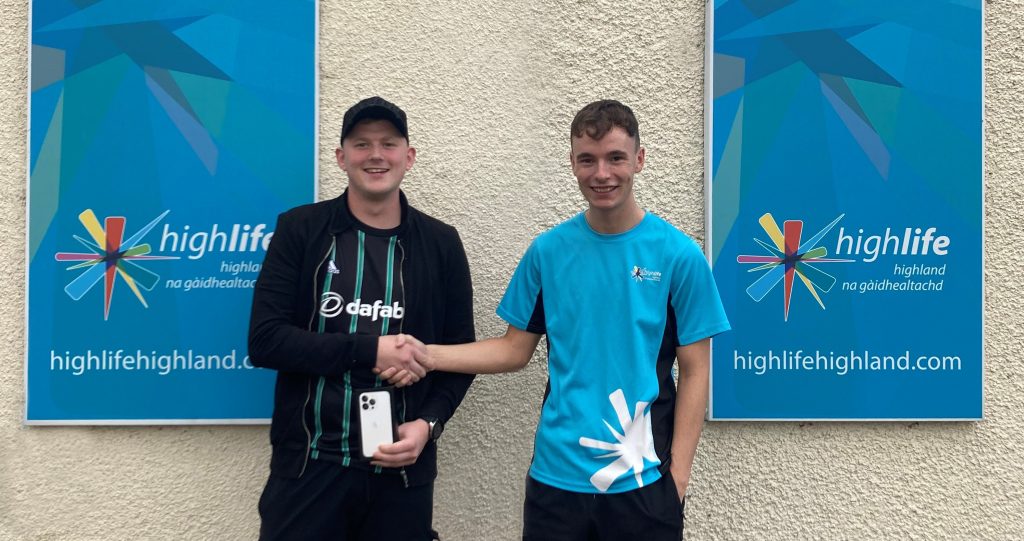 When Ryan Renwick from Golspie signed up to be a highlife member last month, he didn’t realise that doing so would automatically enter him into the charity’s free September prize draw to win an Apple iPhone13.

But that’s exactly what happened, meaning that Ryan is now the proud owner of a top-of-the-range phone, courtesy of High Life Highland.

Speaking about the promotion, Graeme Ross, High Life Highland’s Head of Leisure said, “It is great to see one of our newest members pick up this amazing prize, and all for simply signing up to become a highlife member.

“High Life Highland’s leisure and marketing teams have worked together to come up with a three-month campaign designed to support the charity’s post-pandemic recovery, not just in leisure, but across the wider charity.

Graeme went on, “The three-month campaign started in September and will run until the end of November. Each month will see our new members entered a free prize draw to win some awesome prizes, the first one being the iPhone13 that Ryan from Golspie won.

“Any member joining over the month of October will be entered into a prize draw to win a much sought-after e-Bike. And you’ll have to keep an eye on social media for the equally amazing prize that we will offer in November.”

Speaking about the campaign, High Life Highland Chief Executive, Steve Walsh said, “The teams are working really hard to attract new highlife members to support the charity being able to delivery its objectives across the Highlands.

“It is great to hear that Ryan won this prize, as it is thanks to members like him signing up to the highlife card that allows the charity to delivery services such as our youth work initiatives, adult learning projects, projects to support those most vulnerable in our Highland communities and helping the many thousands of people, many of whom are in care, access to our services at extremely low or no costs.

“We are hugely grateful to people like Ryan joining the highlife scheme. We think it is great value for money, in fact, we believe it is the best value for money leisure scheme in the country. So, I would urge people to come along and give it a try.

The Charity Chief concluded, “Your subscription fees won’t be paid out to any private shareholders, HLH’s shareholders are the Highland communities it service; so, your subscription will be doing much more than you could imagine across those communities. And, as a bonus, if you join in October or November, you could be like Ryan and win one of our incredible top-end prizes.”

Any member that signs up for to a highlife membership throughout October or November, will be entered into a free prize draw. Full terms and conditions are available on highlifehighland.com.